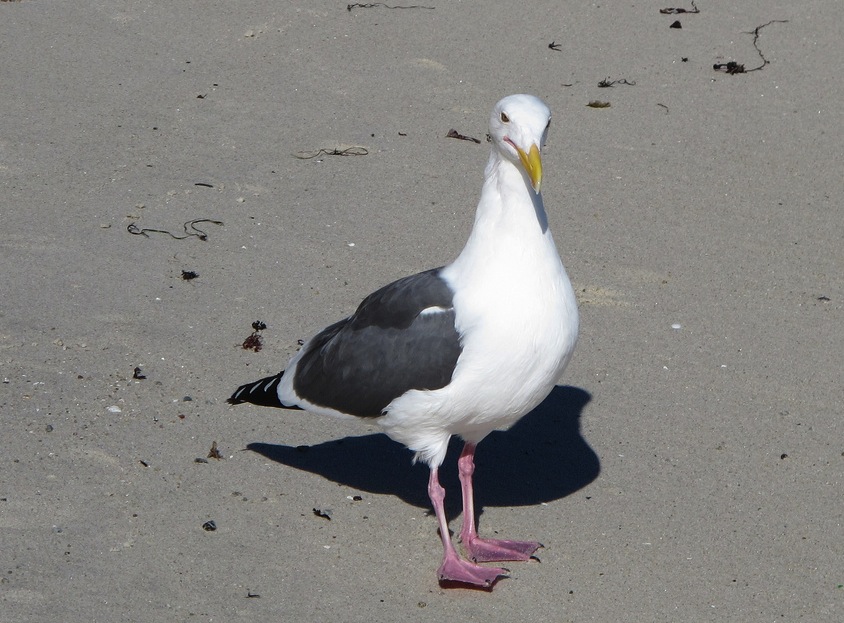 Squawking, squabbling gulls – those known raiders of garbage cans and stealers of sandwiches – are also taking a hefty bite out of threatened steelhead populations on the California coast. So report researchers in a paper published in the journal Ecosphere last fall: they calculated that an out-migrating juvenile steelhead’s chances of being eaten by a Western gull can be as high as 30–45% on average in central California’s coastal streams. That’s some serious carnage for a population already on the edge. Although the gulls don’t specialize on salmonids, and eat everything from trash to carrion, steelhead numbers are low enough (as few as a couple hundred in a given watershed) that even periodic snacking by Western gulls can quickly pick away at their populations, driving them closer to extirpation.

Coming up with such an estimate of overall predation is no simple task, since predation events are rare and hard to observe directly. Scientists can gauge predation to some degree by detecting PIT tags from fishes that turn up in gull roosting or nesting sites – but these tags only represent the minimum extent of predation, since an unknown portion of tagged, consumed fish go undetected. Each tag that the scientists detect at a gull colony (in this case, Año Nuevo Island off the central California coast) is the product of three events that each had to occur: 1) a tagged fish was eaten by a bird, 2) the bird transported and regurgitated or defecated the tag on Año Nuevo island, and 3) the scientists detected the tag with a mobile PIT tag antenna. Each of these events is a probability, which when multiplied together equal the probability of recapturing a given tag. By modeling different pieces of this equation, scientists could come up with an estimate of overall predation beyond just the tagged fish – and revealed that the detected tags are just a small piece of the predation story.

The scientists studied three watersheds within 7 km of Año Nuevo Island, and three that were 30–40 km away. They created a statistical model using data from three different studies – including an experiment in which they embedded tags into small hot dogs, flung them into a gaggle of hungry gulls with a slingshot, then calculated the probability that a consumed tag was transported to Año Nuevo Island. They also used a dataset of recovered PIT tags from steelhead tagged between 2005 and 2011.

The team found that nearly all the tags detected on the island, both from steelhead and the experimental hotdogs, came from the three closest watersheds (Waddell Creek, Gazos Creek, and Scott Creek), and virtually none from the creeks farther away. The transportation experiment revealed that only 7–16% of consumed tags were actually deposited on the island, meaning that the recovered tags from steelhead were indicative of much higher actual predation rates. While gull predation was high, it also varied considerably among years: from 7–67% at Scott Creek, and 11–82% at Waddell Creek. The researchers postulate that access to landfills has contributed to a population explosion (or a tenfold increase) of Western gulls on Año Nuevo Island over the last 25 years, highlighting the hand humans may play in subsidizing this opportunistic predator. Studies like this one stress the importance of estimating the full impact of predation on vulnerable fish populations in order to better manage them in the face of such threats.