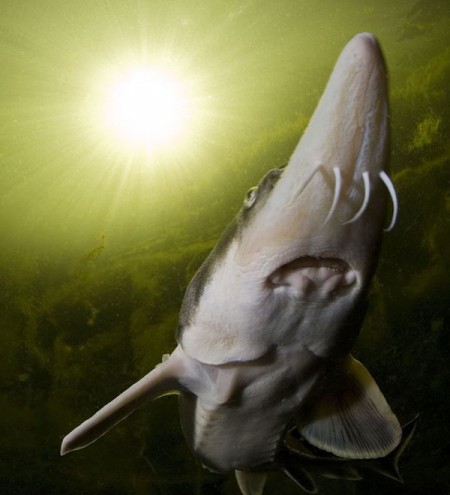 When it comes to a threatened fish population like the Sacramento River green sturgeon (Acipenser medirostris), every adult counts–especially females. These prehistoric-looking fish have many traits that stress the value of each individual, and make their population vulnerable to environmental changes. Green sturgeon mature late, live long, grow large, reproduce multiple times, and don’t reproduce every year. The massive fish can grow 2.3 m long (7.5 ft) in the Sacramento River, can live for 50 years or more, and, similar to humans, females may not start having offspring until they are 16-27 years old (Beamesderfer et al. 2007). Losing these precious mature females can deal a serious blow to the population, and scientists have recently discovered a new threat to sturgeon on the Sacramento River: getting trapped behind flood diversions after waters recede. Green sturgeon habitat on the Sacramento River has undergone extensive modifications, including the construction of flood control structures that divert water from urban areas during floods, but also form barriers to fish migration.

Scientists didn’t realize that flood diversions posed such a danger to sturgeon on the Sacramento River until dozens of the fish got stuck out of the water during their spring spawning migrations in April 2011, prompting a rescue operation. Researchers from the UC Davis Department of Wildlife, Fish, & Conservation Biology, California Department of Fish & Wildlife (CDFW), and the U.S. Army Corps of Engineers decided to conduct a study to determine how such stranding could affect the threatened green sturgeon population in the long run, and whether rescuing the fish helped their survival or spawning success. One of the study co-authors, FISHBIO biologist Matthew Peterson, participated in the research during his previous position at UC Davis. The team’s findings, published this month in the North American Journal of Fisheries Management, indicate that rescuing trapped sturgeon can improve their survival and spawning success, but doesn’t entirely offset the negative impact of stranding on the population.

After the April 2011 flood, the researchers, personnel from the National Oceanographic and Atmospheric Administration, and many CDFW volunteers recovered 25 stranded green sturgeon at two sites on the Sacramento River, all mature adults. Of these, 23 were in good enough condition to tag and study. The scientists performed quick surgeries to implant acoustic tags and checked each fish’s sex and reproductive state before release. The team then tracked sturgeon movement using an extensive array of 47 acoustic monitors stationed along the Sacramento River, as well as a mobile tracking receiver. After release, 71% of the rescued sturgeon successfully migrated to their spawning grounds. The authors constructed a mathematical model to investigate the effects of stranding and rescue over the long term. They predicted that if stranding events occur repeatedly over the next 50 years, which they are expected to do based on flood patterns, the number of adult females would decline by a third, dealing a major blow to the viability of the population. In contrast, rescuing the stranded sturgeon would lead to a mere 7% decline over 50 years. Returning stranded fish to the main-stem Sacramento River clearly benefits the population, but saving each fish out of water is not a viable long-term strategy for protecting the population. Effectively reducing the threat of stranding will require modifying flood control structures to allow sturgeon to pass through, the authors say.