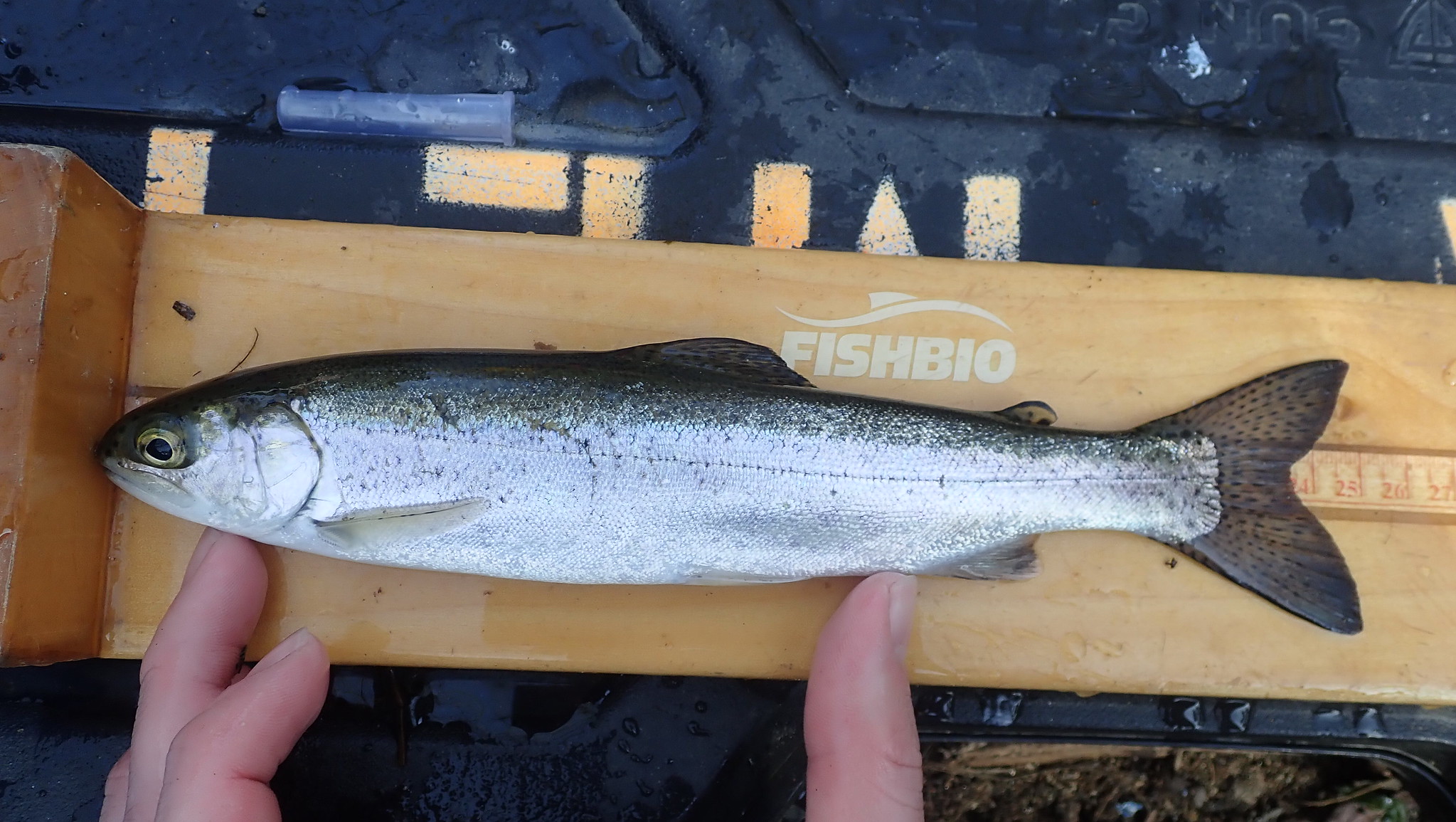 Conducting surveys for steelhead nests, or redds, can be a useful means of estimating the number of spawning fish in a system. However, overlap in spawn timing between steelhead and other Pacific salmon species like coho (Oncorhynchus kisutch) can make it difficult for surveyors to determine which species made a redd in streams where both species occur. Environmental DNA (eDNA) provides a potentially useful tool to address this issue, and Sarah Brown of the Washington Department of Fish and Wildlife presented on a pilot study that analyzed eDNA in water samples taken from redds in Washington streams. Ultimately, they found that eDNA successfully identified 88% of steelhead and 100% of coho redds. Repeated sampling also revealed that this genetic signature persists in the water for at least 28 days. Future work to develop this approach may involve analyzing eDNA on gravel samples taken from the redds themselves.

Another exciting new technology for steelhead monitoring was presented by Emily Miller from the Monterey Bay Aquarium, who discussed an ongoing study using pop-up satellite tags to track the movement of steelhead adults that have spawned in streams and returned to the ocean. Little is known about this oceangoing phase of the steelhead lifecycle, which are also known as kelts. By tagging kelts captured in the Situk River in Alaska and Scott Creek on the Central Coast of California, the researchers collected data on the ocean movements of steelhead from two very different systems. Although the data are still preliminary, they made a number of interesting observations, including the fact that fish appear to follow cooler sea surface temperatures and move along the continental shelf. They also noted that California steelhead tended to dive deeper, which may be related to differences in prey location. This study is ongoing, and the team hopes to use the tag data to learn more about energy expenditures, mortalities and predation events, and environmental effects on movement.

Presentations also covered new approaches to angler engagement and fishery assessment. The Oregon Department of Fish and Wildlife (ODFW) has had a steelhead catch reporting card system since the 1950s, but analyzing data from these paper tags has posed a number of challenges and the return rate of cards has fallen over the years. The state began implementing an electronic licensing system (ELS) in 2018, and Angela Ward and Michelle Jones of ODFW provided a presentation on this process and the development of a smartphone app for e-tagging. The app contains a form that the anglers use to share information on their catch, records a location and time, and supports offline logging so anglers can use it even when they don’t have cell service. This system can provide near real-time data on fish harvests, and can also be used to notify anglers about changes to regulations. Their overall takeaways were that the increasingly used ELS helps remove reporting bias, improve return rates, and provide real-time turnaround of harvest data. Development of the system is ongoing, and they anticipate that angler participation will continue to increase.

In addition to these talks, the meeting provided dozens of other interesting presentations on steelhead monitoring, and all of the slides are available on the PSMFC website. The efforts to understand and manage steelhead populations are as varied and complex as the species itself, and the PSFMC Steelhead Management Meeting allows for a useful exchange of knowledge among experts working in the many systems where these unique fishes occur.