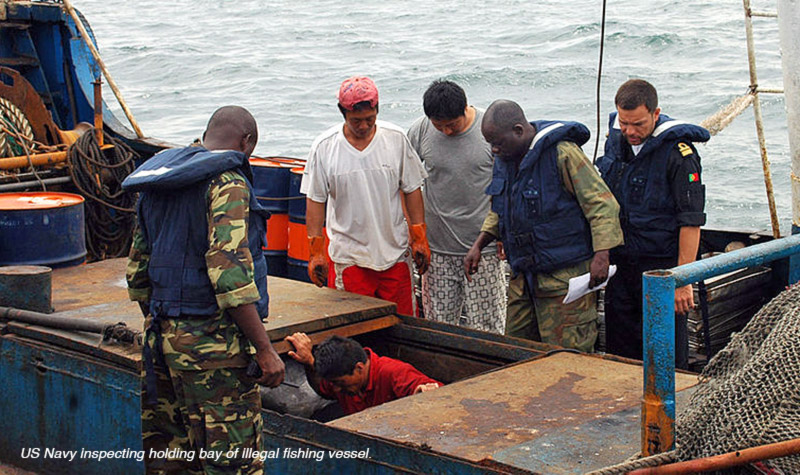 For decades there has been a worldwide movement to reduce overfishing and create a sustainable future for all fisheries, but despite the public’s increased awareness of the negative consequences of depleting our oceans, there are still incidences of illegal, unreported and unregulated (IUU) fishing occurring all over the world. The actions of a disobedient few can have dramatic consequences on the livelihoods of many and can affect incomes, jobs, and the overall marine environment. A lack of compliance with the rules and regulations makes it difficult to achieve the goals of rebuilding and creating sustainable fisheries.

In order to get the message across that IUU is not something that will be tolerated, harsher punishments and tighter regulations are being implemented for those who are not cooperating. Recently, the European Commission cracked down on members of the European Union (EU) that have repeatedly overfished. Typically, when overfishing occurs within EU waters, quotas are reduced by a percentage of the amount that the nation overfished, but after three years of disregarding the measures countries like France and Portugal will have their catch quotas reduced by 50%. Spain’s horse mackerel industry suffered the largest penalties, which reduced the total allowable catch from 22,409 metric tons to 9,596 metric tons. The High Court in Edinburgh also came down hard on ten men who were partaking in illegal fishing between 2002 and 2005. The men frequently reported fewer fish than their actual catch so that it appeared as if they were not exceeding catch limits. Their actions resulted in overfishing and their penalties totaled £1,194,447 (1.87 million USD) in fines and confiscations. In other areas, such as Thailand, illegal fishing activities in restricted waters are compounded by related illegal activities, including human trafficking. Traffickers in Thailand will promise jobs to people from Cambodia or Myanmar who have crossed the border to look for work, but many end up as slaves on fishing vessels, working in harsh conditions for sometimes years without pay. 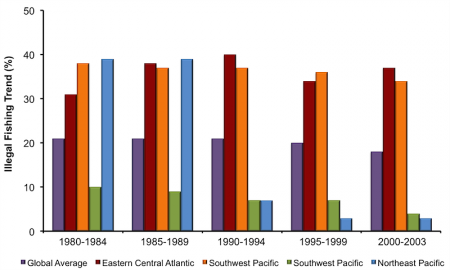 The majority of fishermen agree that overfishing and taking fish illegally are not worth the risk, but there are others who are not so concerned. Since 1980, it is estimated that the percentage of fish caught illegally has decreased slightly on a global scale, however illegal fishing is still a major concern in many areas (Figure 1). In the Northeast Pacific near Alaska and Southwest Pacific near Australia, illegal fishing is estimated to only be around 3% and 4%, respectively, and great efforts have been made to continue to decrease the already low levels of illegal activity. Some of the areas where illegal fishing is the most prevalent occur along the Eastern Central Atlantic around central Africa and Western Central Pacific around the Philippines. It is estimated that illegal fishing remains around 37% and 34%, respectively, in these regions. There have been recent discussions on how to control illegal, unregulated and unreported fishing, but thus far there has been little action taken and rebuilding the fishery remains out of reach.