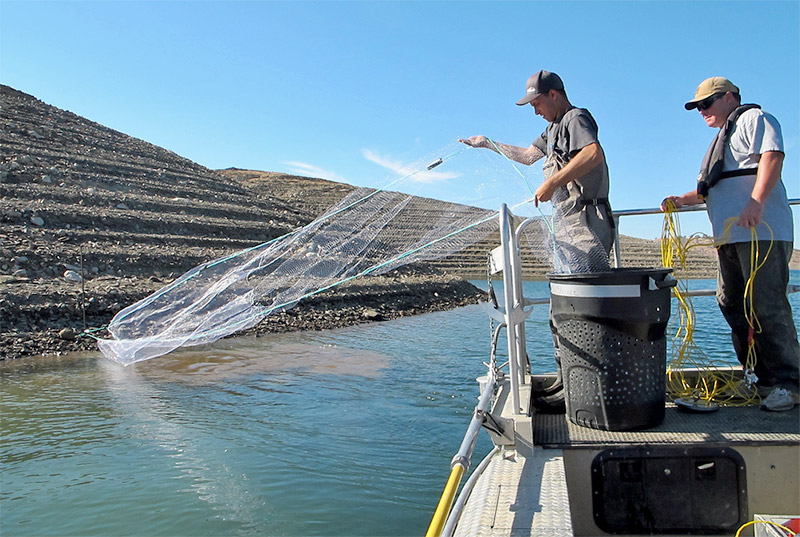 The FISHBIO crew is in the middle of a busy week of lake sampling and thought it would be worth sharing a bit about the methods we’re using. Biologists often need to employ multiple methods to sample fish populations. We have written about our use of electrofishing to sample fish in lakes, but this technique also has some limitations. Electrofishing usually takes place along the shoreline and shallow-water habitats, which doesn’t catch the larger fish that inhabit the middle of the lake or deep water. The most common method for sampling the deeper water in lakes is gillnetting, the technique we’re using this week. 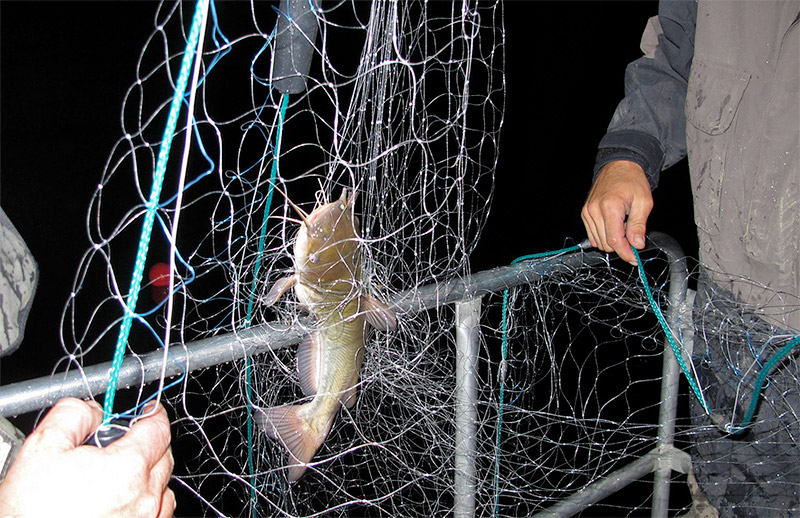 Gillnets are common for sampling inland waters because they are versatile and low-cost. The large net hangs vertically in the water column, suspended from floats on top and weights on the bottom. Fishes that swim into the net snag their gills or fins in the mesh. Factors such as where, when, and how deep we deploy the net, as well as the size of the mesh openings, determine the size of fish the net will snare. For the current study, we are evaluating the whole fish assemblage, so we catch a variety of species including black bass, sunfish, crappie, kokanee and rainbow trout. We are targeting juvenile fish with shallow nets near the shoreline and adult fish in deep water. By changing the length of the line hanging from the floating buoys to the top of the net, we can position the net at various depths such as the thermocline, a temperature boundary layer in the water that fish often inhabit. After setting the nets, we leave them in place for a fixed amount of time, then pull them aboard the boat to recover and process the fish. We identify, weigh and measure everything we catch. With sampling happening around the clock, we will be glad when the job is finished so we can catch up on some sleep.