In drought years, there is often little concern for flood control or California’s levee system that was designed a century ago, but wildlife and fisheries biologists have begun to realize that these structures can be useful in any season. Flood control was a huge priority in the early development of California, and levees were constructed to prevent the Sacramento river from flooding inhabited areas, such as the densely populated city of Sacramento. In the event that the river stage might breach the levee, a system of five weirs was constructed between 1916 and 1933 to divert excess runoff into both the Sutter and Yolo bypasses. The weirs are areas along the levee that are graded lower than the rest of the bank to direct flow in the desired direction. Chances are, you may not even realize the weirs were there if you were to pass by them.

The levees and bypass channels have played an important role in the settlement and cultivation of California. When humans first began to settle in California, flooding of the Central Valley’s great basin was a constant threat that often destroyed homes and claimed lives. Over the years, people learn to control the river’s power, and the engineering of dams and levees changed the ecosystems of California. Flooding was still a risk after levees were constructed, and a contingency plan was devised in the form of five weirs: the Tisdale, Moulton, and Colusa weirs, which spill into the Sutter Bypass, and the Sacramento and Fremont weirs, which dump into the Yolo Bypass. Farmers have long utilized the bypass channels’ fertile soils for growing rice crops, but in recent decades other untapped potential uses of the bypass channels have been recognized. The California Waterfowl Habitat Program, which was established as a result of the California Waterfowl Habitat Preservation Act in 1987, was introduced to improve valuable wetland habitat along the Pacific flyway that has been degraded over the last 100 years. Sustained flooding of the fields of the Yolo and Sutter Bypass has made them a major destination for all sorts of waterfowl during the winter months. 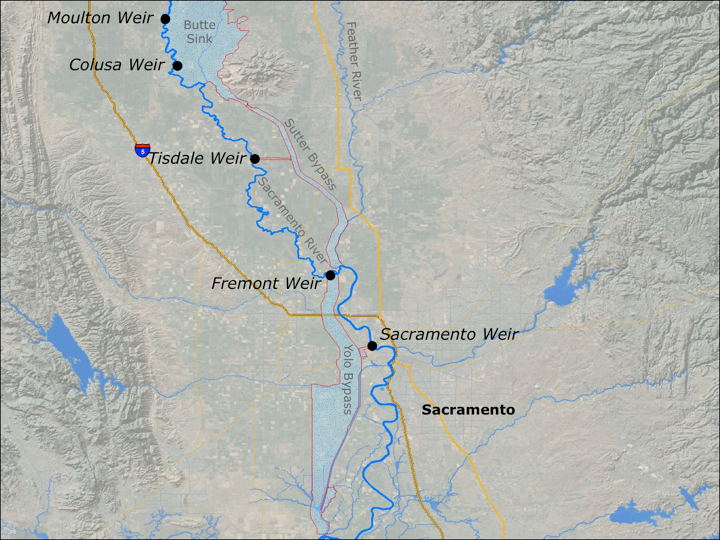 Another use of these channels has come about through the Nigiri Project, also known as “fish on rice.” Researchers from UC Davis, Cal Trout and the Department of Water Resources have teamed up in an experiment designed to test whether flooded rice fields of the Yolo Bypass make suitable floodplain habitat for young Chinook salmon during winter months. Historically, the banks of the Sacramento River flooded regularly, creating thriving conditions for salmon. Today, large riprap banks guard much of the floodplain, but the Nigiri Project may prove to be a valuable tool for salmon growth and survival, even in years of drought when the Colusa Drainage Basin feeds the Yolo Bypass. However, in order for naturally spawned fish to utilize the floodplain, better connectivity from the Sacramento River into the Yolo Bypass would need to be established. So far, studies have shown that the growth rate of the floodplain fish is much greater than their river counterparts, and could prove a valuable tool for the future of Chinook salmon. New innovations continue to arise from the historic structures that shape California’s water system.