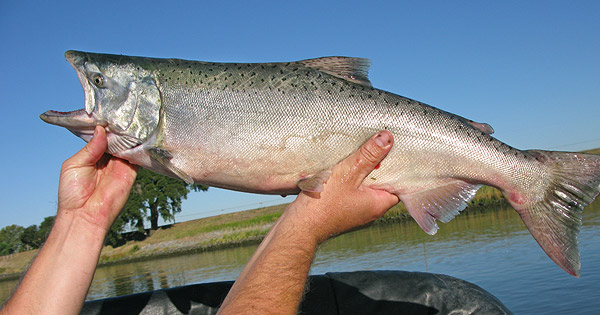 Each February, the Pacific Fishery Management Council (PFMC) releases their Pacific salmon abundance estimates from the previous year to compare with their preseason forecasts and to help develop management decisions for the upcoming season. Last year, the PFMC’s preseason forecast projected that the Sacramento Index (SI) for 2011 would be 729,900 Sacramento River Fall-run Chinook (SRFC), an incredible rebound from recent years of low abundance. The SI includes the number of SRFC expected to contribute to escapement (that is, the number of adults returning to freshwater to spawn) and the number available for commercial and recreational harvest, which, in 2011, was predicted to be 377,000 returning adult spawners and 352,900 harvested salmon, respectively.

On February 9th, 2012, the PFMC released the 2011 escapement estimates that proved rather dismal with only 121,742 SRFC adults returning to the Sacramento River basin for spawning (0.3% below the minimum conservation objective of 122,000). Based on the PFMC’s newly adopted status determination criteria (SDC), SRFC are considered “overfished” whenever the 3-year geometric mean spawning escapement is less than the minimum stock threshold (MSST) of 91,500. As such, the PFMC report indicates that the SRFC should be considered overfished since the geometric mean of SRFC escapement in 2009, 2010, and 2011 was 85,195.

A low number of returning adults could be explained by high harvest rates. However, based on preliminary California coastal catch numbers (commercial and recreational at 69,783 and 49,020, respectively) and the preseason Central Valley inland estimate of 61,400 (inland catch not available at the time of the PFMC’s report), it appears that combined California coastal and inland harvest was relatively low at approximately 180,203 fish. As a result, the SI for 2011 was approximately 301,945 or 41% of the preseason estimated SI of 729,900.

So what happened to the other 59% (427,955) Chinook salmon that were predicted to be along the California coast and migrating through the Delta this last Fall? Based on the recent history of PFMC predictions, it is not surprising to see such a large difference between their preseason forecast and the actual SI estimate (Figure 1). Last March, FISHBIO noted that in 2010 the PFMC’s preseason forecast was over 1½ times the actual post-season value (PFMC 2011), and in 2009 the preseason forecast was over 3 times the actual post-season value (PFMC 2010a). Although PFMC’s 2011 SI prediction was 729,900, they indicated that actual abundance could be as low as 231,671 Chinook salmon due to a wide 95% confidence interval around the estimate. Despite the possibility that actual abundance can be substantially lower than predicted values, the PFMC uses their annual predictions as guidelines to set fishing rules and regulations. By not using more conservative estimates, management strategies may be implemented that are not as protective as they should be, particularly when actual abundance is substantially lower than the forecasted abundance (for example, 41% of the predicted SI in 2011). 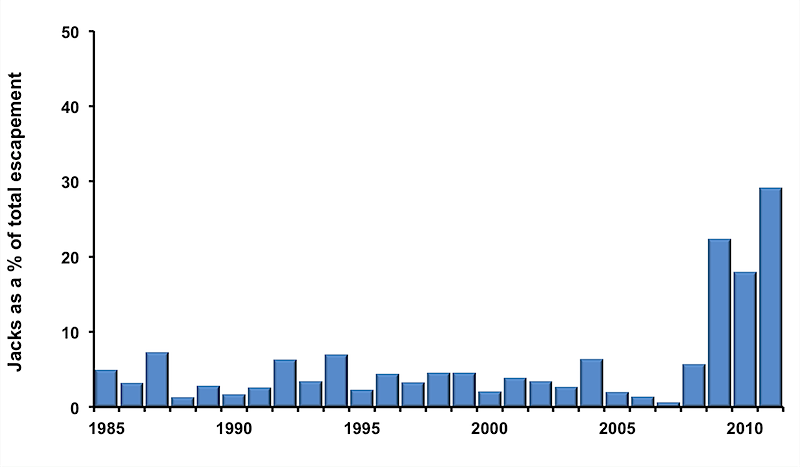 Figure 2. Percent of the Sacramento River Fall-run Chinook salmon that are jacks (PFMC 2012, Table B-1 and B-2). 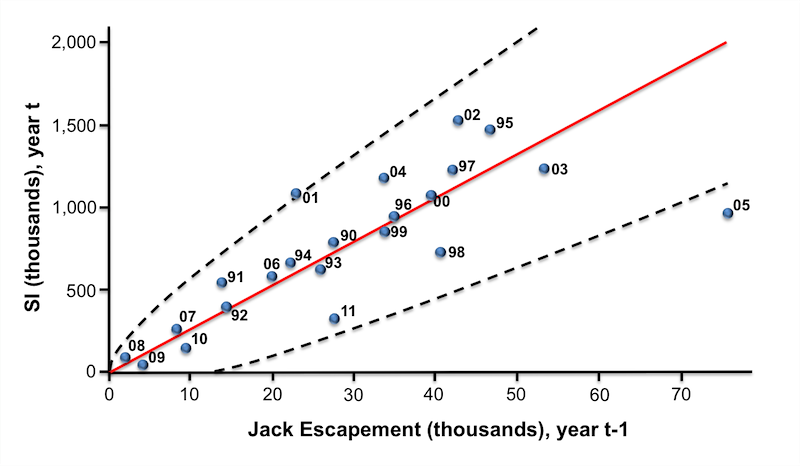 The data indicate that the accuracy of PFMC’s predictions has been worse in recent years and at the same time, jacks (male salmon that mature early and return at age 2) are making up a larger portion of the run (Figure 2). The SI forecast is calculated based on the number of jacks that returned in the previous year; for example, the 2011 abundance forecast of 729,900 was made based on the presence of 27,483 jacks that migrated through the Sacramento River watershed in fall of 2010. If the PFMC continues to forecast the SI based on this method and uses the total number of jacks observed in 2011 (i.e., 88,167), then their prediction for the fall of 2012 will be greater than 2 million Chinook salmon (Figure 3). The PFMC has acknowledged that due to the way that predictions are calculated, “there is a potential for the SI forecast to be biased high in years when the strength of successive cohorts is increasing” (PFMC 2011). If the PFMC continues to make predictions in the same manner, they are likely to drastically over-estimate the number of Chinook salmon, and fishing regulations may jeopardize the future of the SRFC population.