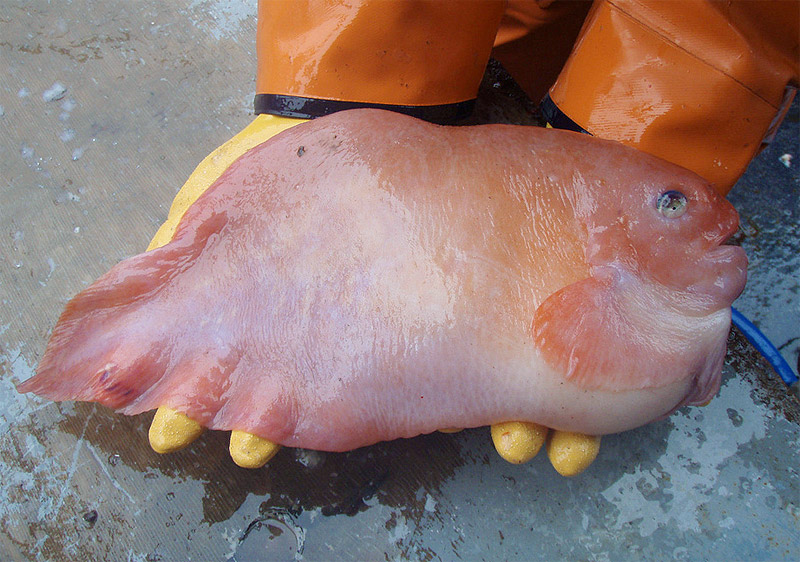 Resembling the intergalactic criminal in George Lucas’ Star Wars saga, this salmon snailfish (Careproctus rastrinus) clearly ranks among the more peculiar species FISHBIO staff have encountered during past research expeditions. This fish is one of over 350 species belonging to the snailfish family (Liparidae), which is represented in marine waters worldwide, provided sufficiently cool temperatures occur (Stein et al. 2001). While some members of this family can be found in shallow tidepools, snailfishes occur most frequently over soft bottom on the continental shelf and continental slope. However, they also inhabit deep-sea environments such as ocean trenches, setting the record for deepest living fish caught on camera when hadal snailfish were filmed in an ocean trench nearly five miles below the surface. Snailfishes are a poorly studied family of fishes, and previously undescribed species are documented at an astonishing rate as the boundaries of scientific exploration continue to expand to novel territories, in particular the deep ocean (Stein et al. 2001).

Commonly shared morphological features of snailfish include a tadpole shaped, scaleless body, and pelvic fins that are fused into a suction disc (though the fins may be absent altogether in some species). Reduced skeletal ossification and a watery, jellylike skin minimize their density and aid in maintaining neutral buoyancy (Eastman et al. 1994), allowing them to glide along the seafloor with only a minimal expenditure of energy. Sensory organs resembling taste buds on the ends of their pectoral fins allow them to “feel” for food items along the seafloor, which include crustaceans, worm and other invertebrates (e.g., Sakurai and Kido 1992). Some members of this genus exhibit unusual reproductive strategies, depositing their eggs in the gill chambers of large crabs where they incubate in a well-aerated, protected environment (e.g., Somerton and Donaldson 1998); an unusual strategy fitting of this odd fish.