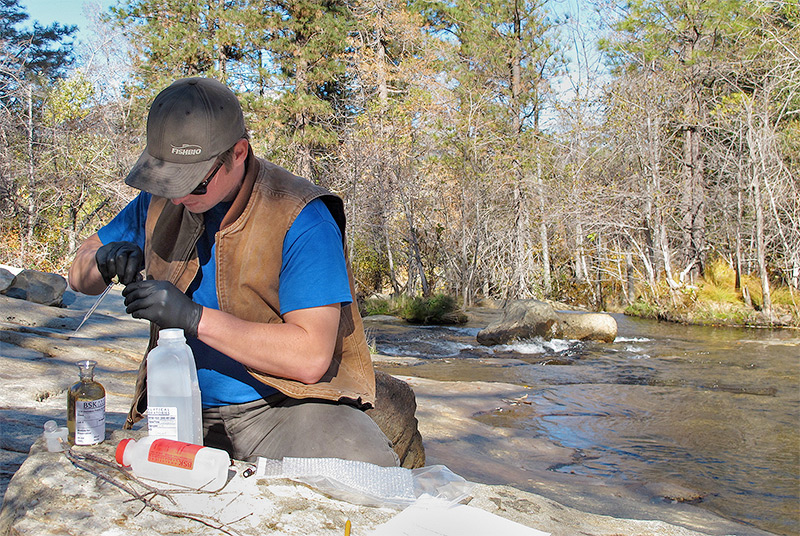 We all know water is the essence of life—it participates in vital chemical reactions that sustain us, grows the food we eat, and helps produce the electricity we consume. For fishes, whether a rainbow trout in a high mountain stream or a tuna in the open ocean, water is also the medium in which they live. Since freshwater fishes must share this precious medium with humans, sometimes there is not enough to go around. As fisheries biologists, we continuously study the quantity and quality of water in rivers, lakes, and streams, and its effect on the fish inhabitants, from the cellular level to the population level. We examine the optimal conditions for particular species as well as their tolerance of extremes. Rainbow trout, for instance, do best in cold, clean, highly oxygenated water. Scientists have studied rainbow trout tolerance extensively: in the Sierra Nevada, their optimal temperature range is 59-65°F (15-18°C; Moyle 2002) and their critical thermal maxima, the temperature at which normal activity is no longer possible, is approximately 75-79°F (24-26°C; Molony 2001).

Dissolved oxygen is one of the most critical factors for fish survival and is closely related to temperature, since cold water holds more oxygen. The technician in the photo above is conducting the Modified (Azide) Winkler Test for dissolved oxygen. This procedure involves adding a series of chemicals to a water sample that “fix” the oxygen concentration, or cause it to become stable. Then, we carefully titrate some of the water with another chemical to measure the amount of dissolved oxygen. Trout can tolerate dissolved oxygen as low as 2.6 mg/L, but do best in levels higher than 5 mg/L (Molony 2001). With the demand for water ever increasing and temperatures predicted to rise, monitoring water conditions will likely continue to be an essential element of fisheries biology.