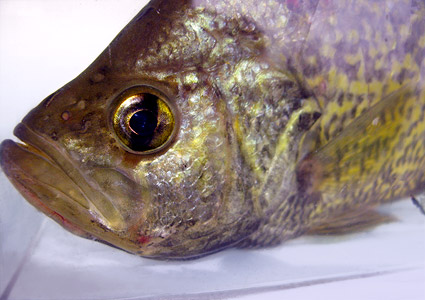 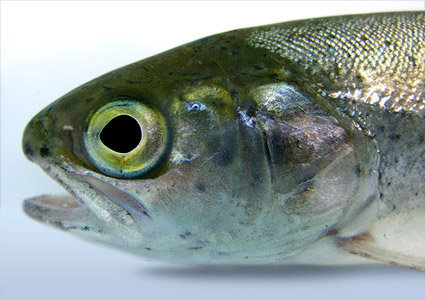 Like with people, the eyes can tell you a lot about the habits and behavior of a particular fish. For instance, the eyes of these fish are distinctly different, yet the fish were utilizing the same stream habitat prior to capture. Why would two fish using the same habitat have such dramatically different eyes?

The eyebars on the black crappie (Pomoxis nigromaculatus – top photo) are generally believed to camouflage the eye from predators by visually confusing potential predators, especially when the fish is seen against the complex background. When the eyes are disguised or vanish in the background, a primary target for predators is concealed. Eyebar configuration is tailored to the morphology of the fish so that the camouflage effect is maximized. The direction of the eyeband is correlated with relative body depth. Deep-bodied fish have predominantly vertical eyelbars, whereas fusiform, or shallow-bodied, fish display longitudinal ones.

Predatory fish also have eye adaptations that help them to locate and capture prey. These adaptations include eyes placed farther forward on their head and/or elongated pupils, providing them with greater depth perception needed to judge the distance to a potential prey item. Notice the eyes on the rainbow trout (Oncorhynchus mykiss – bottom photo) are farther forward on the body and the pupils are elongated, helping it more effectively catch invertebrates and other fish, its two preferred food items.