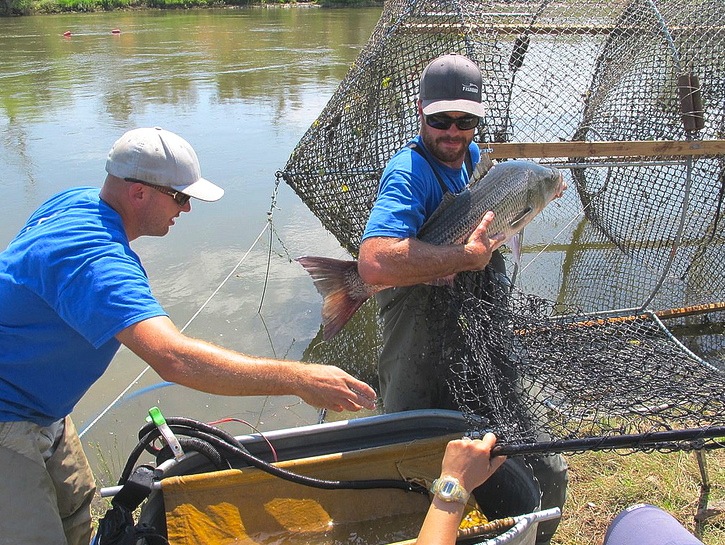 This past spring, FISHBIO used a pair of large fyke traps to target striped bass migrating from the Sacramento-San Joaquin Delta into the San Joaquin River as part of a mark-recapture abundance feasibility study (See Counting striped bass). Specifically, we wanted to evaluate trap catch rates, tagging procedures, and trap deployment locations. FISHBIO fabrication experts constructed two massive fyke traps, similar in design to traps that have been used by the Department of Fish and Wildlife (DFW) in the Sacramento River for decades (See What the fyke). After a three-week deployment, the results are in, and demonstrate the effectiveness of fyke traps for this purpose. However, more effort would be needed to mount a full-scale striped bass abundance survey. 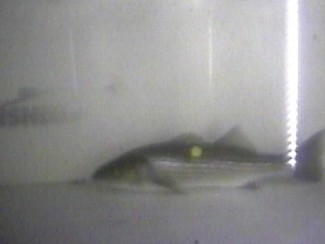 The traps were deployed last May at two locations between the head of the Old River near the city of Mossdale, California, and the confluence with the Stanislaus River more than 20 miles upstream. Overall, 45 striped bass and 49 bycatch fishes (Table 1) were captured over the course of 438 trap-hours (total sum of the hours each trap was set). Striped bass catch per trap-hour was calculated for each day-long trap set, and ranged from 0 to 0.94 bass per hour. Forty striped bass were tagged with yellow disk tags and passive integrated transponder (PIT) tags, and were released in good condition. Similar to results of previous DFW monitoring, the male-to-female sex ratio was highly skewed at 19:1. No striped bass were re-captured in the fyke traps, but anglers reported recapturing one tagged striped bass near the city of Stockton, and another in Old River in the South Delta. Additionally, a striped bass bearing a yellow disk tag was visually identified in video footage from the Stanislaus River weir, indicating that at least one tagged striped bass entered the Stanislaus River in June.

The results of this pilot study demonstrate the successful use of fyke traps to capture and release healthy striped bass in the mainstem of the San Joaquin River. This capture method is less stressful for the fish than gill netting (Hopkins and Cech 1992), and has minimal impacts on other species, such as listed salmonids (all captured salmon were released in good condition). However, the lack of recaptured striped bass indicates that a much greater effort (through increasing the number of traps and the number of hours of sampling) would be needed for a successful mark-recapture study. The mark-recapture of striped bass would not only provide an opportunity to monitor and count individual striped bass in the San Joaquin Basin, but the sampling could also provide a platform for other valuable research on striped bass movements, such as using PIT and acoustic telemetry technologies. For more details on our pilot effort, please see the final report (Ainsley et al. 2013). 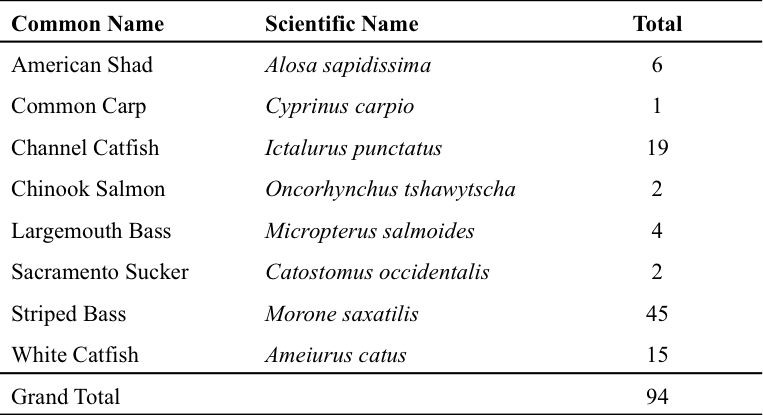