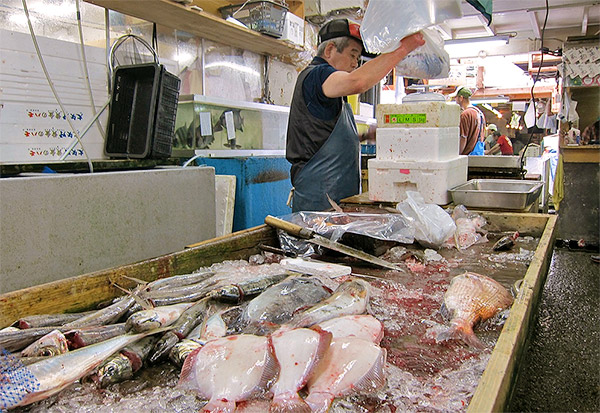 When you buy fish from a store, restaurant, or sushi bar, it might seem reasonable to assume that the fish you order is the fish you get. But check that fillet again. Seafood substitution, or selling one species of fish as another, is a practice that dates back decades and remains a major issue around the country. Although such mislabeling is illegal, swapping a cheaper fish like tilapia for a more expensive fish like snapper is an all-too-tempting way for a business to turn a quick profit. And it’s tricky to spot the deception as a consumer: removing a fish’s head, tail, skin, and fins (essentially all of its key identifying features) makes one slab of fish on a plate virtually indistinguishable from another.

The ocean conservation group Oceana has confronted the problem by turning to forensic sleuthing. Using fish DNA analysis, the group has documented rampant seafood fraud across the country, from Los Angeles to Boston. Oceana’s most recent study in New York City found that more than a third (39%) of the 142 seafood samples tested were labeled incorrectly. More than half of the 81 fish sellers (58%) sold mislabeled fish-including all 16 sushi bars. In almost all cases, “white tuna” was actually escolar, an oily fish known to cause gastrointestinal problems. “Red snapper” proved to be a catch-all label of sorts, applied to everything from white bass and tilefish to tilapia and other species of snapper. A quarter of the salmon samples were mislabeled-usually farmed Atlantic salmon passing as wild-caught Pacific salmon. Sushi restaurants were the most frequent offenders, and small markets had more mislabeled fish than larger chain grocery stores.

Besides being illegal, this seafood duping can harm both human health and the ocean. Oceana’s study found that tilefish, which is on the FDA’s do-not-eat list for women of childbearing age because of its high mercury content, was sold as red snapper or halibut, which do not carry health warnings. And not all fish are equal when it comes to fishing sustainability­. Some fish live longer and grow more slowly than others, so their populations can’t withstand heavy fishing, and some fish are caught or farmed with more destructive methods. Despite media attention surrounding seafood fraud, many businesses are slow to change practices unless they are penalized. In the meantime, as a customer you can take precautions by asking lots of questions of your store or restaurant, opting for a trusted certification label, and, if you’re coastal, buying local. The fewer hands a fish passes through on its way to your plate, the fewer chances for fraud.