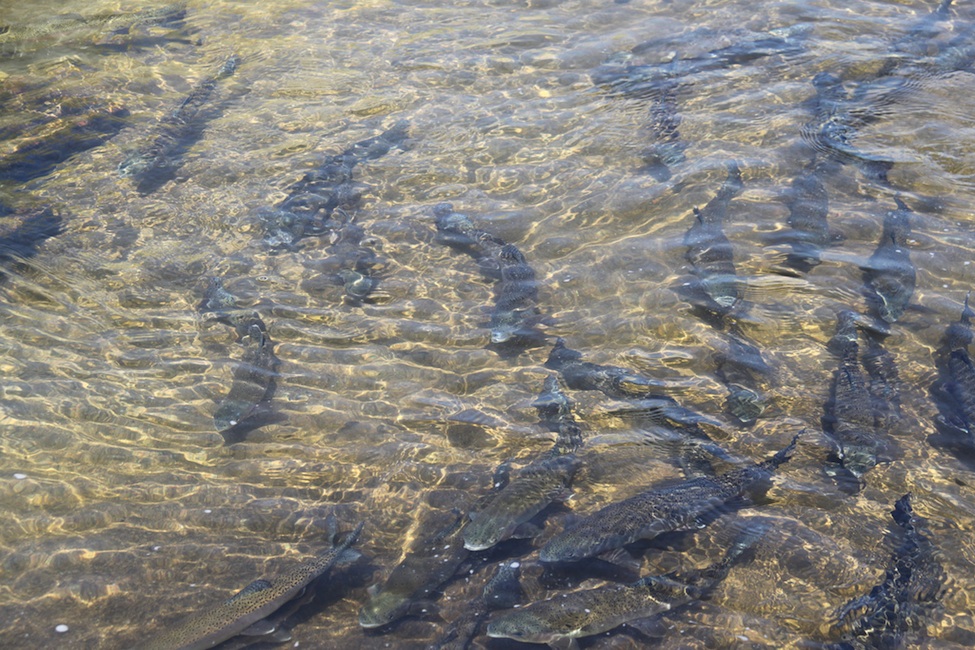 Steelhead, the migratory form Oncorhynchus mykiss, once abounded in California’s Central Valley. But its populations have crashed from estimates of 1-2 million (McEwan 2001) to a mere 10,000 in the 1990s (NMFS 1996), and this group of steelhead has been listed as “threatened” under the Federal Endangered Species Act (ESA) since 1998. The primary reason for this decline are the dams that have severed access to 80% of the habitat steelhead historically used for spawning and rearing (Lindley et al. 2006). Additionally, hatchery management has been identified as a factor that contributed to the Central Valley steelhead’s threatened status (Federal Register 1996, Federal Register 1998). Transferring eggs and fish for breeding among various hatcheries has homogenized the genetics of the steelhead population, and new research also highlights a concerning amount of inbreeding occurring at California steelhead hatcheries. Similar to the challenges posed to Chinook salmon, current hatchery practices threaten the viability steelhead as well.

One federal and three state-operated hatcheries currently propagate juvenile steelhead to mitigate for the impacts caused by dams. Steelhead from the federally run Coleman National Fish Hatchery and state-run Feather River Hatchery are considered part of the Central Valley Distinct Population Segment, the group of steelhead considered threatened, whereas fish from the state-run Nimbus and Mokelumne River hatcheries are not. However, genetic research by the NOAA Southwest Fisheries Science Center presented at the CalNeva American Fisheries Society meeting in Reno revealed that fish from the Mokelumne River and Feather River fish hatcheries are essentially the same stock, which is a violation of the Endangered Species Act listing. The researchers also found that across all hatcheries, more than half of fish used as broodstock in the Central Valley hatchery programs have at least one full sibling that is also used as broodstock. About a quarter of the mated pairs at Nimbus, Feather, and Mokelumne Hatcheries are first cousins, which results in some amount of inbreeding, and the researchers even discovered that some mated pairs consist of half siblings or full siblings. Such inbreeding could compromise survival or reproductive success of these fish.

Genetic mixing is observed across O. mykiss populations within the Central Valley complex (Pearse and Garza 2015), and is due to hatchery stocking practices such as transferring eggs and fish between hatcheries for breeding, and releasing hatchery fish off site, or far from the hatchery location (California HSRG 2012). Conservation efforts are wasted when hatchery fish interbreed with wild fish on natural spawning grounds because hatchery genes considered less evolutionary fit than wild genes, and once they are mixed with wild genes, the effects are largely irreversible (Pearse and Garza 2015). Unfortunately, hatchery-origin fish appear to dominate the Central Valley DPS (Lindley et al. 2007): best-available estimates indicate that 60-92% of all Central Valley steelhead smolts outmigrating past Chipps Island in the Sacramento-San Joaquin Delta are artificially produced (Nobriga and Cadrett 2001 , NMFS 2003, U.S. Bureau of Reclamation 2008).

The contribution of hatchery fish can be very high on certain rivers, such as on the American River, where hatchery fish accounted for more than 90% of the O. mykiss at natural spawning grounds from 2002-2010 (California HSRG 2012). These values are much greater than those observed historically; during the 1950s, hatchery fish only comprised  about 12% of the total Central Valley steelhead population (Hallock et al. 1961 as cited in Nobriga and Cadrett 2001). Influxes of these straying hatchery fish can mask the declines happening in natural populations, which begs the question of whether wild O. mykiss populations would be self-sustaining if not for the constant supply of hatchery subsidies.