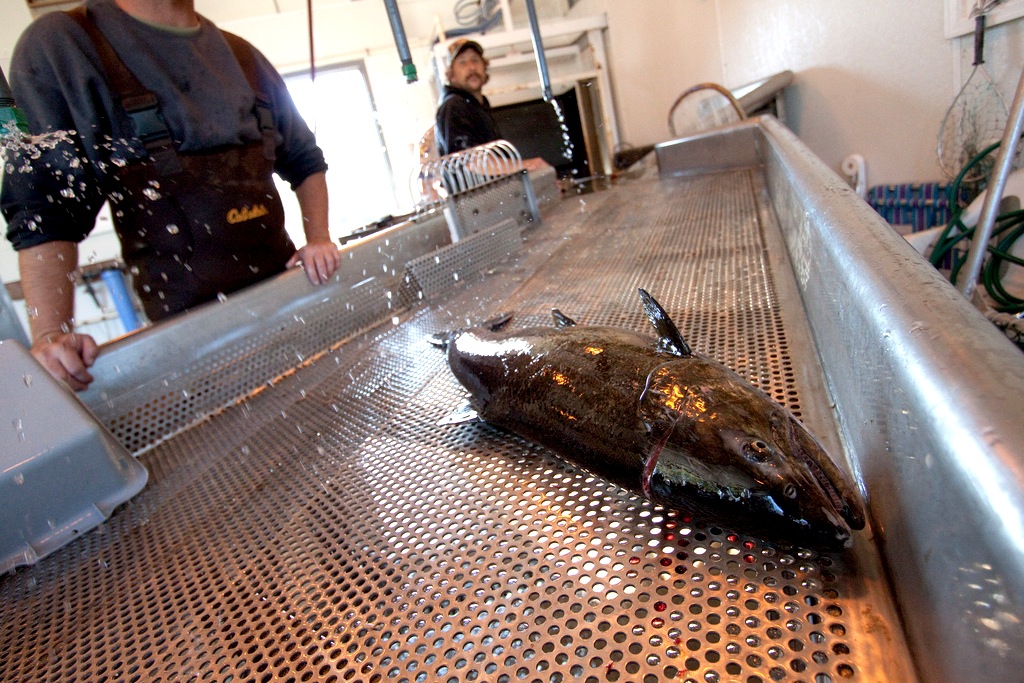 Fish planting from hatcheries is a more-than-100-year-old solution to supplement stocks that have declined due to a range of issues and impacts. While many stream fish populations depend heavily on these practices, this reliance can come at a cost. In California today, 10 state and federally operated anadromous fish hatcheries produce upwards of 50,000,000 salmon and steelhead every year. Both fry and smolts are released into waterways across the state, from the Klamath River to the Merced River, and even into San Francisco and Monterey Bays. The current hatchery system was constructed primarily to mitigate the loss of fish spawning habitat above dams. Dam construction in California began in the late 19th century, subsequently preventing Chinook salmon from accessing over 80 percent of their historical spawning and holding habitat (Yoshiyama et al. 1996). Coupled with habitat loss, the introduction of invasive species as well as overfishing and pollution have also contributed to the decline of Chinook salmon.

Hatcheries originated as a logical solution to these declines: artificial fish propagation in hatcheries is intended to offset the high mortality of young salmon and increase the abundance of adult fish in the wild. From a sheer numbers standpoint, hatchery production is an unquestionable success. But while the fish production of California’s hatcheries is both immense and technologically impressive, there remain uncertainties about how effectively these artificially sustained populations can serve as surrogates for their wild counterparts. It may seem illogical that hatcheries could actually impact the very species they are meant to proliferate; however, many studies have raised concerns about hatchery practices, backed up by empirical evidence (Waples 1999).

While it is unclear exactly how many wild-origin Chinook salmon hatch in rivers each year, it has been estimated that more than 90 percent of the total ocean population of this species originated in hatcheries (Barnett-Johnson et al. 2007). As hatcheries churn out numbers of fish meant to rival the historical size of salmon and steelhead runs (estimated at 2 million Chinook and 1-2 million steelhead annually; Yoshiyama 1998, McEwan 2001), competition for the little remaining spawning and rearing habitat has intensified. Juvenile salmonids released into rivers from hatcheries often out-compete their wild counterparts for the same resources because hatchery fish are frequently released at a larger size (Tatara and Berejikian 2011). After a few years, as the surviving adults make their way back up the rivers to spawn, large numbers of hatchery-origin fish mate with each other, as well as with wild populations. Whether one or both of a fish’s parents came from a hatchery, these offspring often have lower reproductive success. They can reduce the fitness of the entire population by essentially erasing generations of natural selection for traits adapted to the local environment (Araki et al. 2008, Christie et al. 2014). Additionally, hatchery production masks the declines of natural-origin fish populations by inflating the overall size of the salmon population, which allows for increased commercial and recreational harvest. Harvest can comprise as much as 70 percent of the total population, with no way of knowing if harvested fish are of natural-origin because only a small percentage of hatchery fish are marked.

Hatchery managers are not complacent, and many develop strategies to evolve and remedy some of these issues; however, many less desirable practices are still commonplace. While most hatcheries have ceased the practice, some continue to use broodstock from sources outside the natal fish basin. Many hatcheries attempt to incorporate wild-origin fish into their broodstock; however, complications exist because these fish generally spawn in-river and thus do not enter the hatchery trapping facilities (where their reproduction can be controlled) as readily as hatchery-origin fish. Once fish have entered the facilities, mating practices are traditionally conducted randomly with no regard for fish size or other characteristics, which can lead to unintentional selection for unwanted traits, such as younger age at maturity (Hankin et al. 2009). Furthermore, mating practices at many facilities involve mixing eggs and sperm from multiple individuals in the same batch. Due to differences in fertilization success amongst males, this can result in unnecessarily reducing the effective size of the breeding population. Once fish are hatched and raised to a requisite size, they are often trucked to downstream release locations to avoid degraded and hazardous migration corridors. While these off-site releases can improve survival rates, this practice does not allow the young fish to imprint on their migration route, and has resulted in occurrences of straying hatchery adults that interbreed with wild fish. Genetic mixing as a result of straying has lead to a lack of genetic diversity in the population of Central Valley Chinook salmon (Williamson and May 2005).

These potential impacts identified through research have lead to several attempts to create a more sustainable hatchery system. In 2010, following the success of a similar program on the Columbia River, Congress approved funding for a California hatchery review. The report of the California Hatchery Scientific Review Group was completed in 2012 and outlined a number of recommendations to meet the goals of the hatchery system. Additionally, many conferences and workshops, such as the upcoming Hatchery vs. Wild Salmonid Symposium hosted by the Oregon Chapter of the American Fisheries Society, help draw attention to these issues. With the hatchery system seemingly intertwined with anadromous fish survival in the state of California and along the West Coast, such discussions and reforms are integral in protecting our region’s iconic fish species. Research, reform, and advancement of hatchery science and management will help reduce the potential for impact. Hopefully, this reform in conjunction with improved management of naturally produced fish will allow for a more balanced and representative wild fish population.