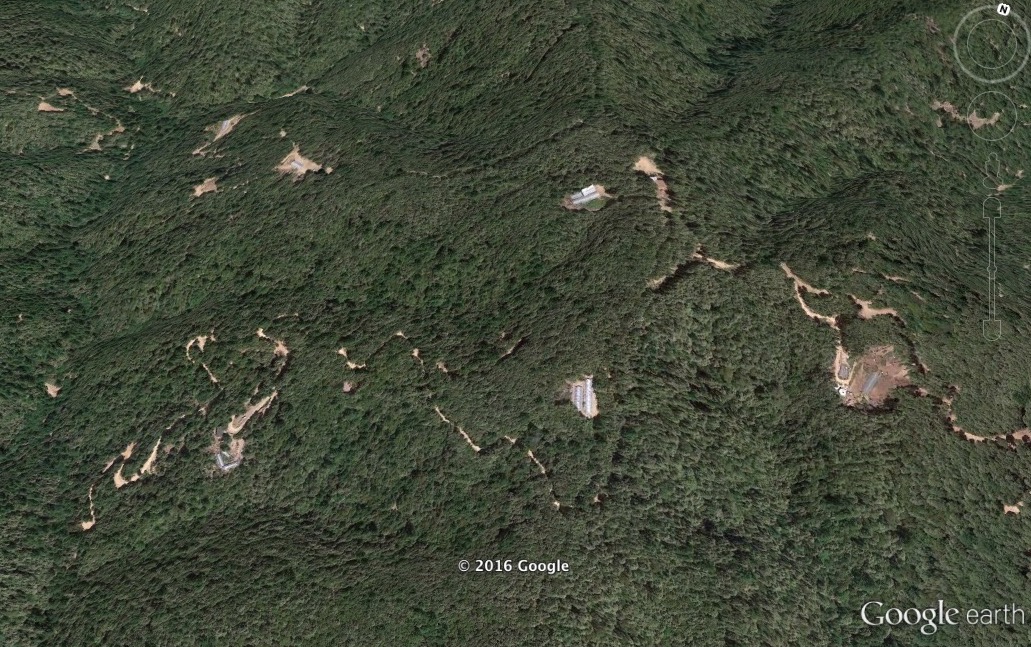 It just takes a Google Earth tour to spot the rise of marijuana growing in California. Navigate through aerial imagery of Humboldt County forests, and patches of cleared trees lined with greenhouses quickly come into view, like those shown above. Many people hope the legalization of recreational marijuana in California will enable the state to finally regulate marijuana growing and reduce its associated environmental impacts. However, others argue that until a national policy is implemented to regulate marijuana effectively, a black market will persist to skirt regulations. It has become increasingly clear that a host of environmental issues associated with this industry must be addressed for California to make it a sustainable part of the state’s economy and healthcare system. Many scientists and resource managers are currently investigating the impacts of marijuana cultivation on aquatic ecosystems, while working to prevent further ecological damage in sensitive areas.

The most urgent environmental concerns related to marijuana grow sites are water diversions for irrigation that reduce streamflow, contaminants released into streams, habitat loss through deforestation, erosion that can bury streams, and use of rodenticide that can kill terrestrial wildlife (Bauer et al 2015). Although water use was a more pressing issue during California’s recent drought, it still presents a problem for many important fish-bearing waterways. Pesticides, petroleum products, nutrient loading, and sediment transport from marijuana grow sites continue to be major concerns. Both deforestation and grading of hillsides contribute to erosion, which can bury streams already suffering from water diversions. Meanwhile, countless terrestrial wildlife, including rare mammals such as fishers, are being poisoned by rodenticides meant to prevent herbivory at grow sites.

Altered streamflow and water pollution from marijuana cultivation are growing concerns for sensitive amphibian species in California, many of which are already under a variety of pressures. The southern torrent salamander (Rhyacotriton variegatus) and coastal tailed frog (Ascaphus truei) that live in northwestern California are especially vulnerable to streamflow changes. Reduced flows often cause an increase in fine sediment, large woody debris, and warmer water temperatures in headwater streams where many sensitive amphibian species reside. Another issue for amphibians is the release of pollutants such as pesticides into nearby waterways, causing the spread of toxic chemicals downstream from marijuana grow sites. A presentation at the recent Cal-Neva AFS 51st Annual Meeting demonstrated that foothill-yellow legged frogs (Rana boylii), a California Species of Special Concern, are vulnerable to pesticide contamination at all stages of development. It is likely that similar amphibian species are also at risk from toxic chemicals used at illegal marijuana grow sites.

Marijuana cultivation is taking its toll on California salmonids as well, especially California coho salmon (Oncorhynchus kisutch) and steelhead trout (Oncorhynchus mykiss). The most direct impact to these fish species is streamflow reduction from water diversions – which sometimes drain streams dry. In 2014, the California Department of Fish and Wildlife (CDFW) documented or received reports of more than 24 salmon and steelhead streams drying out in northwestern California at least partly due to marijuana cultivation. CDFW also found evidence of fish kills from marijuana cultivation in 2013, and flows affected by upstream grow sites. Unregulated land use practices have a significant impact on coho salmon and steelhead trout, resulting in juvenile and adult mortality. Less water in streams often means warmer water temperature, which lowers oxygen concentration and can reduce salmonid growth rates making the fish more susceptible to predation and disease. Low oxygen levels are especially threatening to juvenile fish, often reducing their survival. Decreased streamflow also affects other aspects of water quality, habitat availability, and fish movement. While California’s multi-year drought has subsided, there is still potential for serious water-related impacts during summer months and future drought periods.

Research and monitoring continue to demonstrate the negative effects of illegal marijuana grow sites on the environment, from water quality to terrestrial wildlife health. Resource managers in California must consider these impacts to make decisions that will help prevent the increase of illegal cultivation, while better regulating legally operated sites. Public outreach and education on these issues is also important, without alienating those who support legal cultivation for medical or recreational purposes. Marijuana can greatly contribute to California’s economy and medical system, but some serious environmental impacts must be addressed to make it sustainable.