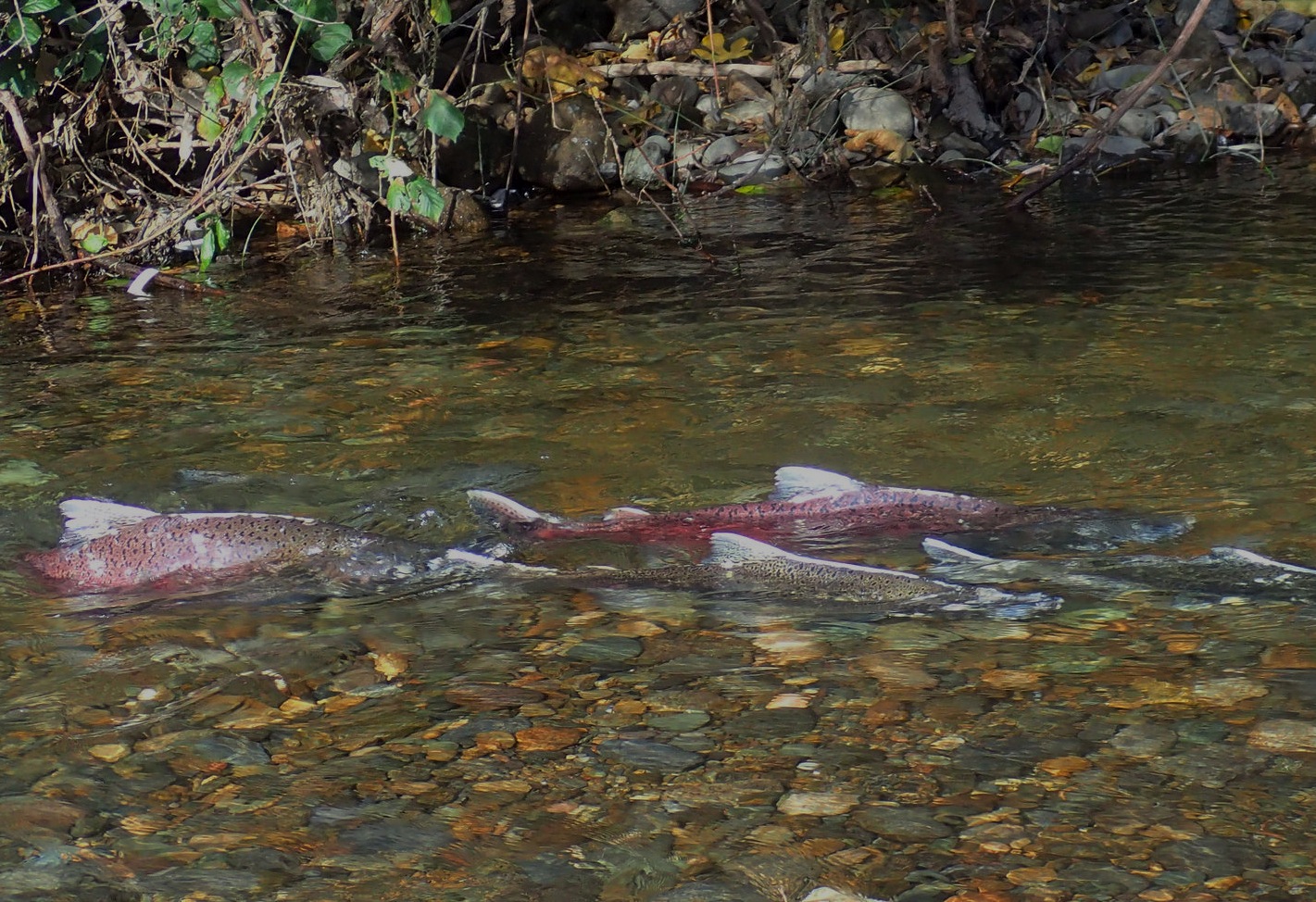 Each February, the Pacific Fisheries Management Council (PFMC) breaks out a crystal ball of mathematical models to predict salmon abundance on the West Coast. The Salmon Technical Team, comprised of experts in salmon management, is responsible for assisting the PFMC by summarizing monitoring data from the previous season and calculating the forecasts. They use data on the number of fall-run Chinook jacks (two-year old fish) that returned to the Sacramento River the previous fall to calculate a forecasted index of abundance for Sacramento River Fall-run Chinook (SRFC) salmon. This forecast, called the Sacramento Index (SI), is the number of adult fish (ages 3-5) projected to be available in the ocean that will either be harvested or will escape to natural areas and hatcheries in the Central Valley (Figure 1). PFMC uses the Sacramento Index to set salmon fishing regulations for the year.

Salmon run forecasting is difficult to do, and PFMC has a history of using forecasts that underestimate the abundance of SRFC. Since 2005, PFMC has overestimated the SI in nine out of 11 years (Figure 2). PFMC has tried numerous approaches to address this issue. In 2012, in an effort to develop a more realistic forecast, the Salmon Technical Team used data from only recent years (2009-2011) in a modified regression; this decreased the 2012 SI forecast from over 2 million to a more reasonable estimate of 819,400 Chinook salmon. This modified forecast was much closer to reality, yet still overestimated the postseason SI value of 618,258 Chinook salmon. Starting in 2014, PFMC began using a logarithmic regression model with additional parameters to account for uncertainty in the estimate to forecast the SI. 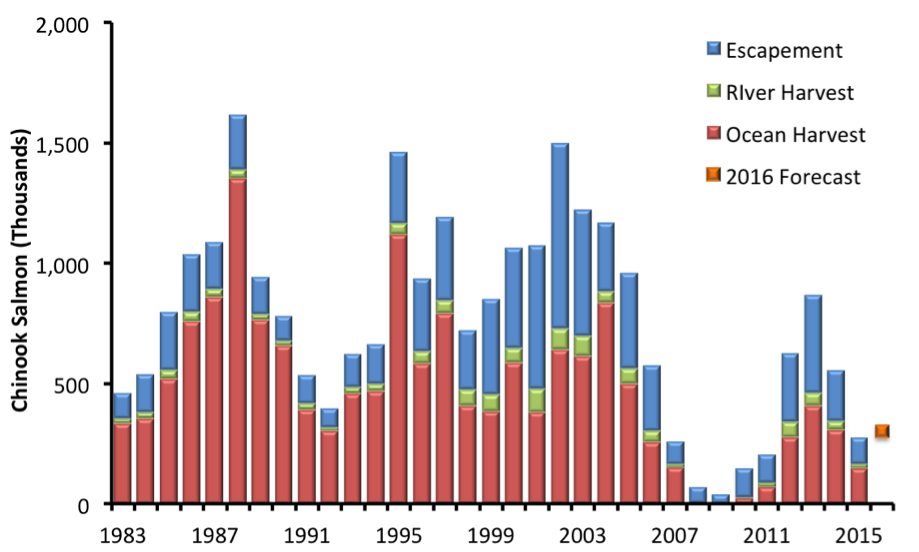 Unfortunately, the new model continued to overestimate the SI. In 2015, PFMC forecasted an SI of 650,000 Chinook salmon, with an estimate that 341,000 of these fish would escape to spawn in the Sacramento River basin. However, the recent 2015 Review of Ocean Salmon Fisheries found that the actual SI was 255,287 salmon (Figure 1), which was only 39% of the forecast. The actual SRFC escapement of 112,434 salmon was only 33% of the forecast, which is below the minimum conservation objective of 122,000 salmon, thus continuing the trend of overestimating abundance and escapement.

PFMC’s current SI estimate for SRFC in 2016 is 299,609 salmon. While this 2016 forecast for SRFC was adjusted down due to the overestimation of the SI in 2015, it still represents an increase over the observed SI in 2015 (Figure 1). It seems like a stretch to expect that there will be more adult salmon in 2016 than in 2015, given the relatively consistent hatchery production, the ongoing drought, the strong El Niño conditions, and declining trends in abundance and escapement. During the 1987-1992 drought, salmon abundance declined over four consecutive years. The current drought began in 2012, affecting juvenile salmon that began returning as adults in 2014, and such effects on adult returns should continue though at least 2017.

Caution is warranted when salmon abundance is already low and should be expected to decline further over the next year or so. In the 2016 Preseason Report I, the Salmon Technical Team also expressed concern that “abundance forecasts presented in this report may prove to be optimistic,” noting that salmon returns tended to be over-predicted during the previous El Niño events in 1982-1983 and 1997-1998. The team also expressed concern that setting high harvest limits for SFRC based on overly optimistic estimates may increase the bycatch of endangered Sacramento River Winter-run Chinook salmon in the SFRC fishery. Clearly, PFMC’s own technical team is concerned about the potential consequences of an overly optimistic forecast, and it seems a more conservative forecast of SI is desirable.