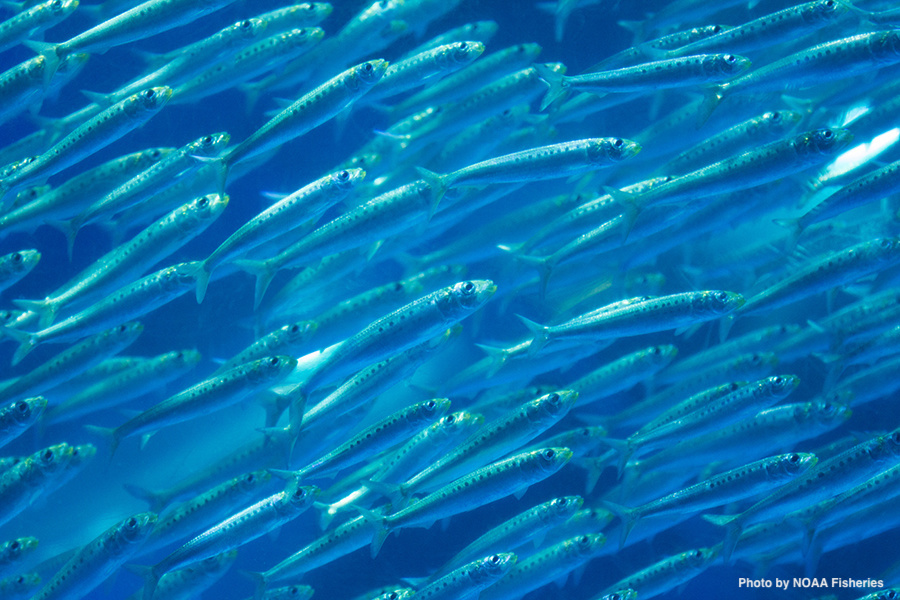 Swirling, silver schools of sardines seem to embody the abundance of the Pacific Ocean, whether filling the nets of purse seiners or the mouths of lunge-feeding humpback whales. But the population of this once bountiful forage fish appears to have collapsed – for the second time in the last century. In April of this year, the Pacific Fisheries Management Council prohibited the opening of the Pacific sardine commercial fishing season for the fourth year in a row. The West Coast season is traditionally managed on an annual basis between July 1 and June 30, with different regulations set during three time period throughout the year.. However, the 2018 stock assessment of sardine biomass fell far short of the 150,000-metric-ton threshold needed for commercial fishing to commence. The latest assessment by NOAA Fisheries estimates the current sardine biomass to be 52,065 metric tons (down from last year’s 86,586 metric tons), which is only about three percent of the 2006 peak year of 1.77 million metric tons. This has scientists worrying that it could be a long road to sardine population recovery.

The Pacific sardine fishery was at one time the largest fishery in North America, as these small, schooling fish produce high-volume catches. However, it is also a fish population that fluctuates with a somewhat predictable decadal trend in ocean temperatures. During the 1930s and ‘40s, peak sardine catches were as high as 700,000 metric tons, fueling the booming fishing and canning industry immortalized in John Steinbeck’s Cannery Row. But then the sardines vanished. In the late 1940s and ‘50s, the fishery began to decline due to a combination of overfishing and natural population fluctuations. Harvest fell to an average of about 24,000 tons in the final years of the fishery, and a moratorium eventually shut down commercial fishing from 1967–1986. The stock rebuilt and rebounded throughout the 1990s, resulting in a thriving fishery in the 2000s valued at $10-20 million annually. But after hitting a peak in 2006, the stock again began to slide. In 2012, fisheries scientists published a study warning that the sardine population was on the brink of another collapse (Zwolinski and Demer 2012). But fishing continued until the stock fell below the commercial threshold, and the fishery was closed in 2015. It hasn’t reopened since.

Ranging from Mexico to the Canadian border, the sardine fishery provides fish oil high in coveted omega-3 fatty acids, fresh and canned food, and bait for other fisheries. Pacific sardines are also an important food source for marine species: whales, sea lions, sea birds and even Chinook salmon rely on forage fish like sardines and anchovies as important prey. With declining populations of Pacific sardines and other high-caloric fishes, scientists have observed increases in sea lion deaths in recent years. Mother sea lions spend more time away from their young in search of food when forage fish populations are low, resulting in malnourished and dehydrated pups stranding on beaches in large numbers – and as many as 70 percent of sea lion pups died between 2013 and 2014. Changing ocean conditions can cause natural fluctuations in sardine populations, but scientists think overfishing can also contribute to a steep drop in biomass (Essington et al. 2015). Taking too many fish during a natural population decline was attributed as the cause of the historic Monterey sardine fishery collapse – and history now appears to be repeating itself.