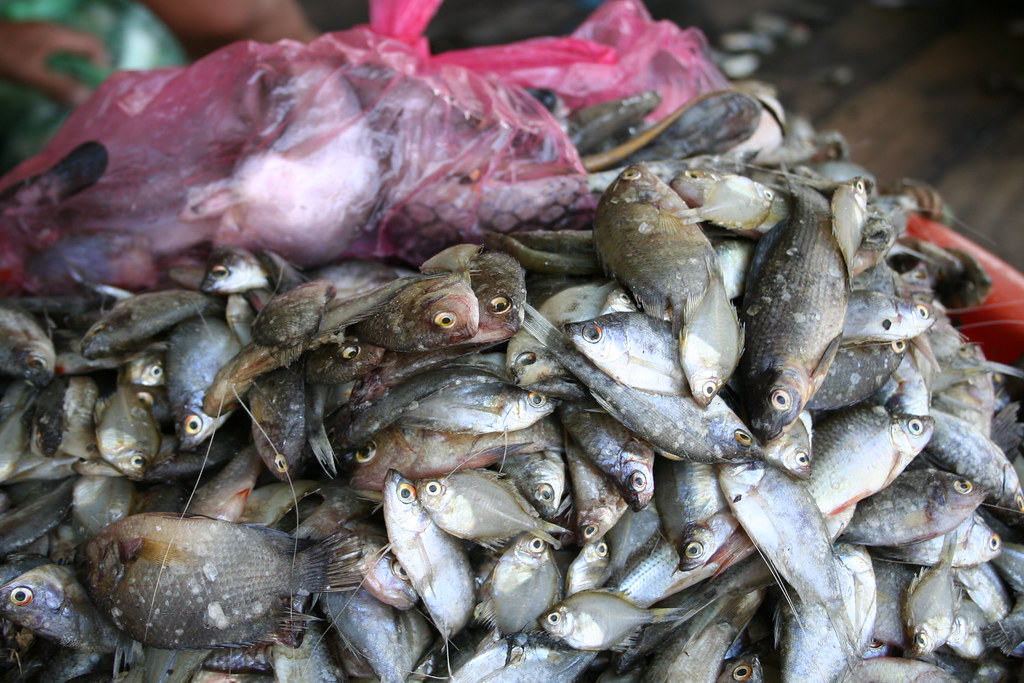 Tonle Sap Lake is unique in its status as Southeast Asia’s largest natural inland lake and largest wetland area. This biodiverse water body has the capacity to sustain almost 300 fish species, and contributes to the health and prosperity of over 15 million Cambodians. The benefits of Tonle Sap fishes to human communities above the water is well understood, but little is known about the spatial distribution of important species below the lake’s surface (which fish are found where), or what drives those patterns. A group of scientists recently completed an analysis of past fish catch data and known characteristics of the lake’s habitat types to determine the distributions of eight important commercial fish species (Chan et al. 2020). These included giant snakehead (Chana micropeltes), striped snakehead (Chana striata), striped catfish (Pangasianodon hypophthalmus), and silver barb (Barbonymus gonionotus), among others. The researchers found that while each species responded differently to local habitat and climate factors, none of the fish showed benefits from the presence of agricultural fields. The study also noted areas of consistently high fish biomass that could be considered for fish conservation efforts.

The team consulted GIS data to map and classify former fishing lots (privatized fishing areas) on the Tonle Sap Lake into percentages of three main habitat categories – flooded forest, open water, and agricultural fields (which may be flooded during certain times of year). Next, commercial fish catch data collected by the Mekong River Commission from 1994–2000 were analyzed to determine where different species were caught in relation to these habitat types. The team evaluated the relationship between habitat and the biomass of each study species caught to outline individual spatial ranges and identify causal factors. To assess the effect of climate on fish distribution patterns, both temperature and rainfall patterns were assessed in relation to observed species patterns.

Results showed that the eight fish species studied exhibited a heterogeneous distribution, meaning different species reside in different areas of the lake. Migratory species that require highly oxygenated water, such as the striped catfish and silver barb, had the highest biomass in open water habitats and were mostly found in central and southern portions of the lake that are subject to wind mixing, water currents, and various algae species to feed on. Floodplain residents and non-migratory species, such as the two snakehead species and the moonlight gourami Trichopodus microlepis were found to be more abundant in the northern section of Tonle Sap, an area that has a higher abundance of the flooded forest and optimal shallow water spawning grounds.

Of the three local habitat factors, the presence of agricultural fields near the lake had the strongest negative effect on fish biomass across all eight species. In particular, the most abundant species with the highest total biomass in commercial fish catch (Gymnostomus spp.) was disproportionately affected by the presence of agricultural habitat. The authors attribute this to low water quality that results from high amounts of pesticides, fertilizers, and herbicides that are used to enhance rice production. Some areas exhibited high abundances of several species (such as fishing lot 2 in Kampong Thom Province), whereas others were important for one species, not others (for example, fishing lot 6 in Pursat Province was characterized by high abundance of striped catfish). These areas could be the focus of future conservation actions.

Together, the eight species highlighted in this study contributed to an average seasonal catch of more than 6,500 metric tons on Tonle Sap Lake, or 64% of the average total seasonal catch over the study period. Fisheries productivity greatly depends on sustaining the health of these species, and this paper highlights that Tonle Sap fish species exhibit a diversity of environmental requirements. Understanding these requirements can help inform fisheries management strategies. Species-habitat relationships in Tonle Sap Lake are influenced by climate, vegetation, floodplain features, and varying human land use. These elements, coupled with unique life history characteristics of each species – like dietary preferences, migration patterns, and reproductive behavior – shape the pieces of this fish distribution puzzle. This research can serve as a vital resource for informing future fisheries conservation strategies, and help Tonle Sap Lake support its diverse ecosystem and vital fisheries.