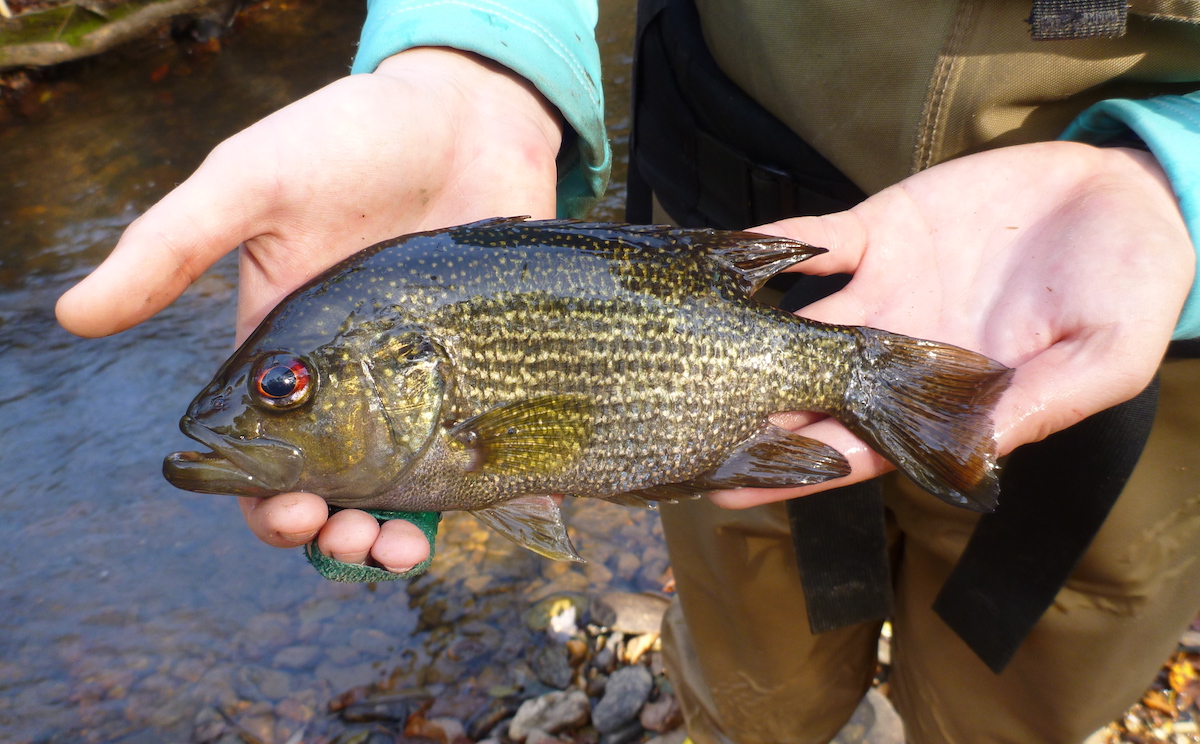 Lakes and streams are naturally isolated, acting as “islands” of aquatic habitat. However, humans have amplified this isolation by creating physical barriers and turning once suitable habitat into disconnected patches. Isolated populations of animals face a number of risks, including loss of genetic diversity and an inability to recolonize areas after a population decline. Understanding how changes to watersheds have impacted fish populations can be difficult given a lack of information on what things were like prior to centuries of human activity. Fortunately, scientists have molecular tools that can assess the current status of populations while also granting a glimpse into the past. Changes in a population are reflected in the DNA of individuals, providing an encoded history that extends back to a time before human alteration of the environment. A recent publication based on the master’s thesis of one of our biologists used such a molecular approach to assess the status of a rare freshwater fish, the Roanoke bass (Ambloplites cavifronsl; Eschenroeder and Roberts 2019). Delving into the history hidden in genetic code revealed the saga of a fish struggling to get by in a changing world.

The Roanoke bass is endemic to just four river drainages in Virginia and North Carolina. This member of the sunfish family has one of the smallest native ranges of any sport fish in the United States – a range that appears to be shrinking. This fish has faced over a century of challenges as a result of human activity, including the introduction of its cousin the rock bass (A. rupestris), which rapidly took over many streams through a combination of competition and hybridization, as well as the construction of dams and conversion of watershed forests to agricultural and urban development. Effectively managing the Roanoke bass that remain today requires understanding the structure, size, and genetic diversity of populations, as well as historical and contemporary connections between them.

To this end, fish collected from throughout the range of the species were analyzed using a suite of microsatellites, which are strings of repeating DNA base pair sequences – “GTCGTCGTC,” for example – that occur at thousands of locations in the genomes of most organisms. The length of these repeated sequences varies, resulting in different “alleles,” and different combinations of alleles form different genotypes. As populations become isolated from one another, the frequencies of the various genotypes in each population diverge from one another primarily by chance – a process known as genetic drift – and analysis of these varying genotype patterns can help differentiate populations. In addition, the diversity of genotypes within a population can be used to estimate the size of that population.

A statistical analysis of Roanoke bass genotypes clustered individuals into 12 distinct populations, which aligned closely with the streams where the fish were collected and reflected the presence of barriers like dams and reservoirs isolating these populations. Assessment of effective population size – an index of the total number of individuals contributing to the gene pool – revealed that all but one population fell below the estimated number necessary to maintain genetic diversity in the long term. More troubling still, further analysis indicated that several populations have experienced “bottlenecks,” or sharp reductions in population size. This suggests that the low effective sizes observed may be the result of a relatively severe bottleneck that occurred within the past six to 50 Roanoke bass generations, or about 20 to 150 years – a time span that corresponds to dam construction and increasing urbanization in this region. Analysis of mitochondrial DNA (which changes much more slowly than microsatellites) suggests that historically, the populations were much more connected throughout their range, lending further support to the notion that the development of small, fragmented populations are a relatively recent occurrence.

The DNA of the Roanoke bass tells a story of a fish that has been slowly forced into smaller and smaller disconnected habitats, but there is hope yet for this unique species. With the knowledge that populations historically experienced more connectivity, managers could undertake a translocation program and move individuals among populations that are separated by barriers like dams or poor habitat. Even the movement of a few individuals could have a significant impact on boosting genetic diversity. Having determined which populations have the lowest effective sizes and are most at risk, managers can also target efforts to bolster diversity and restore habitat. The DNA hidden in the cells of an animal may be microscopic, but the insight it provides for conserving a species is immense.