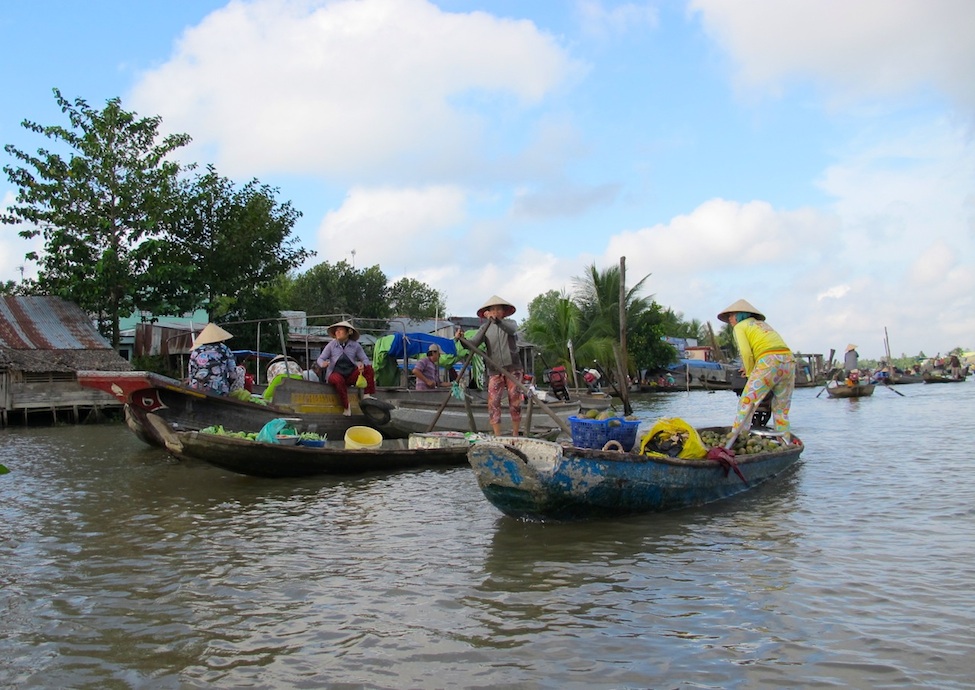 El Niño may have brought some drought relief to California in 2016, but the same weather pattern has induced drought-related stress in other places around the world, including the Mekong River basin. When an El Niño event takes shape, waters warm up near the equator in the Pacific Ocean. This in turn affects global weather patterns, brining heavy rainfall to some areas of the world, and searing drought to others. Welcome rains from the 2016 El Niño made a dent in the multi-year extreme drought parching California. However, El Niño triggered the opposite effect in many other countries: a lack of rain or shifts in regular weather patterns has caused serious droughts around the world. Such El Niño-related droughts can occur from Australia to east Africa at various times of year. An area hit particularly hard by the 2016 El Niño is the Asia Pacific region, including the Mekong River basin in Southeast Asia.

El Niño can intensify the regular monsoonal weather pattern in Southeast Asia: the dry season between November and April is so dry that it becomes a scorching drought, while the storms during the May–October rainy season become intensified. The Mekong region saw an uptick in storms during the 2015 rainy season as the El Niño weather pattern was brewing. Scientists believe that this extreme weather is also related to climate change, and has reportedly resulted in more deaths related to lightning strikes in Cambodia. An ongoing drought has affected all of the Mekong River basin countries, and is the worst on record in Vietnam. A lack of water for key crops like rice and cassava has prompted fears about lost food security. Normally lush green fields of rice are now cracked, empty expanses of dried mud. Earlier this year, Thailand announced plans to drill 4,300 more wells across the country to provide more drinking water for its drought-stricken citizens, and began pumping water from the Mekong River to help irrigate farms. This has raised the concerns of downstream neighbors in Cambodia and Vietnam, who also point to dam operations in China and those planned in Laos as other factors that will adversely affect the level of water in the shared Mekong River.

As the most downstream country on the Mekong, Vietnam is home to the Mekong Delta, where this massive international river meets the sea in a highly modified maze of branching channels and farm fields. The level of the Mekong River is currently the lowest it has been since 1926, according to Vietnamese researchers, which gives the ocean the upper hand at this meeting of the waters, and allows saltwater to push inland. This advancing saltwater has destroyed at least 159,000 hectares of rice paddies, an area larger than the size of Los Angeles, and threatens many more. Some saltwater intrusion is expected annually during the region’s dry season, but the process began two months earlier than usual this year. The salt water marched as far as 90 km inland, affecting groundwater and rice paddies along the way.

The drought may be a harbinger of what the future holds for the region in a changing climate. Climate projections estimate that the local sea level could rise by as much as 1 m over the next 100 years, which would drown more than one third of the Mekong Delta. The threat of sea level rise is profound in the low-lying Delta region, and the population must adapt to the creeping advance of saltwater at its doorstep. Some farmers are shifting to shrimp aquaculture, while others are experimenting with genetically modified rice varieties that exhibit increased tolerance to salt. In the short term, international NGOs have committed to donate millions of dollars to provide drinking water and food to hard-hit communities in Vietnam. Even as the El Niño weather pattern wanes, its lingering effects will be felt strongly in the Mekong region for months to come.