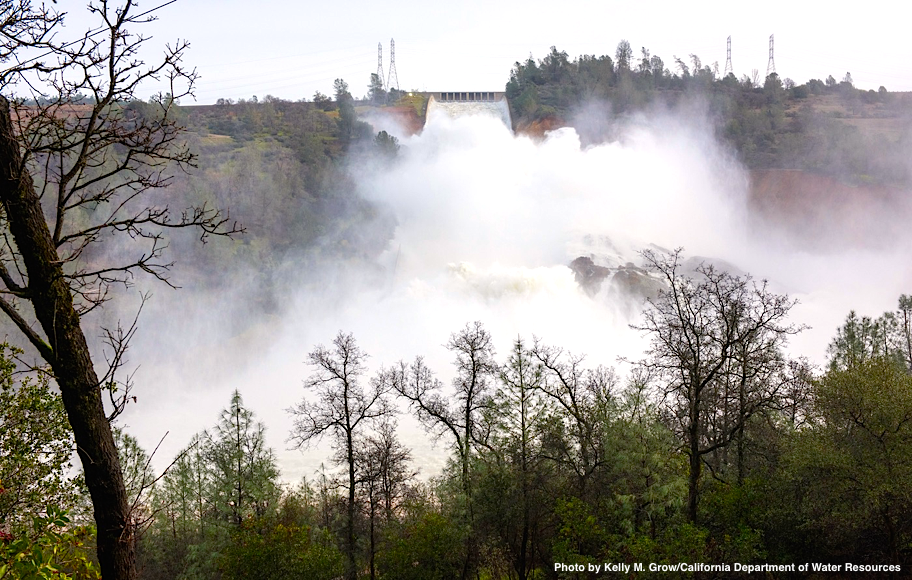 The Oroville Dam made headlines this winter when Lake Oroville overflowed onto its emergency spillway for the first time in its history, raising safety concerns and prompting the evacuation of almost all residents of Oroville and some communities further down the Feather River. Since the February evacuations, the state of California has been working tirelessly to make sure this situation does not occur again. The dam, constructed on the Feather River from 1962–1968 as part of the California State Water Project, is the tallest in the United States at 770 feet. The recent drama began when the dam’s main spillway suffered serious damage. This prompted the first use of the dam’s emergency spillway, which was built in case uncontrollable inflows to the lake would need an extra outlet to prevent the lake’s elevation from rising to dangerously high levels. In 2005, concerned state environmental organizations called the effectiveness of this earthen emergency spillway into question, and recommended it be lined with concrete. However, these concerns were dismissed, in part due to costs. The Oroville Dam emergency spillway was finally put to the test this February for the first time in 50 years, with disconcerting results.

The situation at the dam illustrates just one of many infrastructural issues plaguing California’s aging water storage system. However, the recent ‘perfect storm’ of events is largely due to environmental processes that will continue to impact the state for years to come. The 2016-2017 water year has been incredibly wet for California, with January and February surpassing even the wettest year on record. A series of warm ‘atmospheric rivers’ brought storms that drenched the state, especially in February when the Oroville Dam emergency occurred. These storms coupled with melting snowpack produced an extraordinary amount of runoff into Lake Oroville, making it necessary to release large amounts of water from the main spillway. This led to damage of the main spillway and adjacent hillside, and outflows were decreased to prevent further destruction. Continued storms filled the reservoir at an uncontrollable pace, eventually leading Lake Oroville to overflow onto the never-used emergency spillway, and dangerous erosion ensued. Although a concrete lining would have helped reduce the rate of erosion, record-breaking precipitation played a major part in the emergency.

In hindsight, spending to improve the safety of the spillway in 2005 would have been a better economic move than the current costs of inaction. The Chico Enterprise-Record reports taxpayers are paying $4.7 million a day to deal with the Oroville spillway emergency project. The spillway issues and above-normal snowpack (179% of normal on March 9) may also prompt water managers to keep the reservoir level below capacity until repairs are completed, resulting in less water for agriculture and urban use despite all the precipitation the state has received, which could translate into higher costs for consumers. Furthermore, the cost of repairing the Oroville Dam main spillway could total $200 million according to the Department of Water Resources (DWR), likely paid in part by State Water Contractors with the rest passed on to ratepayers.

The Oroville Dam spillway issues also present environmental ramifications, especially for the Feather River ecosystem and its fish species. The Feather River Hatchery spawns about 30 percent of the fall-run Chinook salmon in California, as well as large numbers of spring-run Chinook and steelhead trout. Erosion from the dam spillway failures transported large quantities of sediment to the hatchery downstream, making the water very muddy. Consequently, five million juvenile salmon had to be relocated to a nearby facility for clean water. The hatchery also received municipal water supplies to support the remaining one million steelhead trout, which were not evacuated. Further issues developed when DWR halted Oroville Dam flows to assess spillway damages and conduct repairs, and the Feather River abruptly receded downstream. This stranded many fish in low spots of the floodplain, including Chinook salmon and steelhead trout, and prompted fish rescues by the California Department of Fish and Wildlife. Despite the setback, Feather River flows will probably recover over the course of the spring, which could greatly benefit wild fish populations that have suffered through the recent prolonged drought.