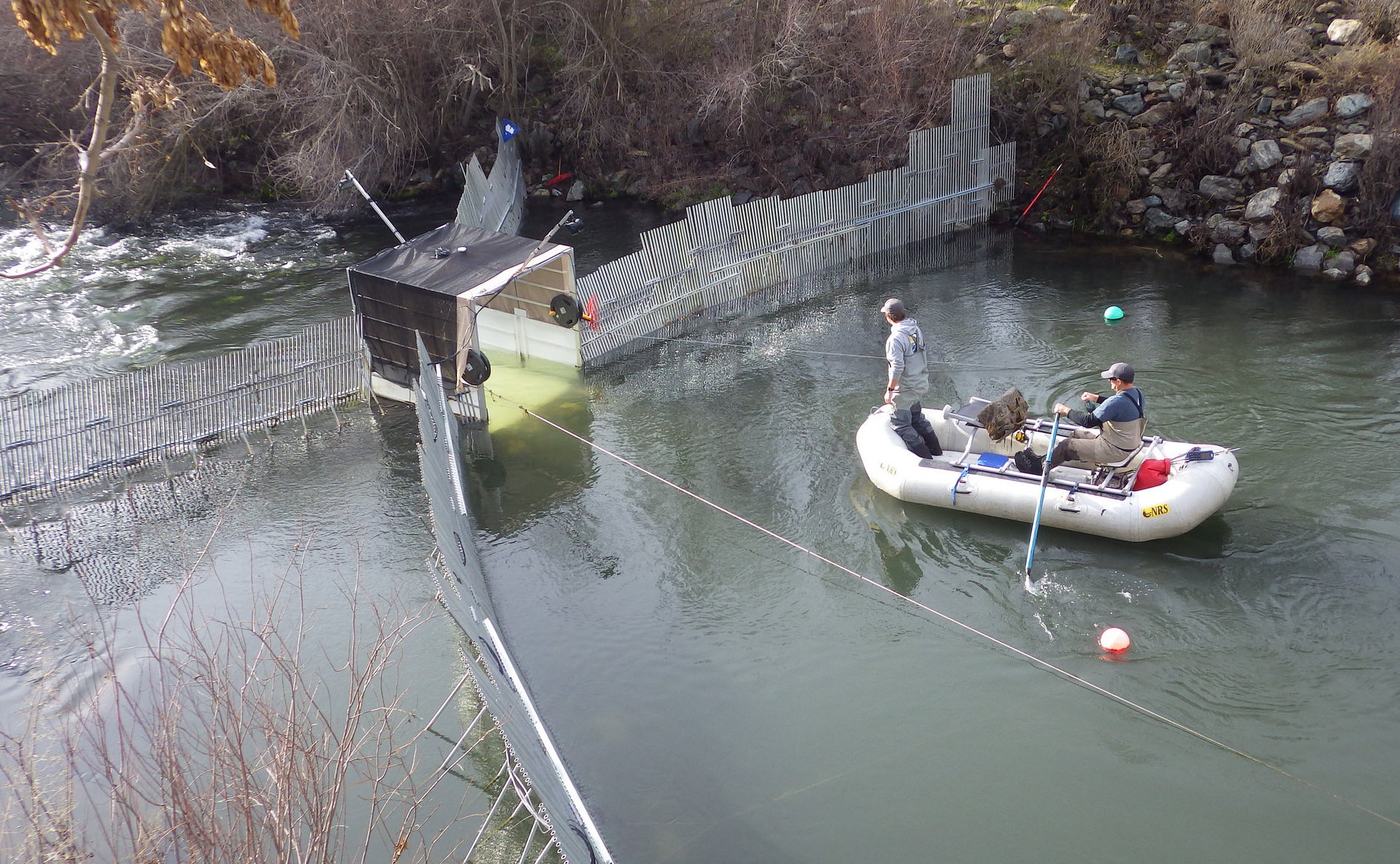 With 2016 winding down, we’ve compiled some highlights of the year to share with you, along with a video of our favorite moments. It was a busy year in the field, with our fish counting weirs documenting record numbers of adult salmon migrating to the Stanislaus and Tuolumne Rivers. We released a report on seven years of snorkeling surveys that showed a precipitous decline in the rainbow trout population on the Stanislaus River, and made a video about the issue. We tested predation tags in our fish lab with HTI, relocated fish as part of a power plant decommissioning, and maintained a rigid weir amid high river flows. We also tested our ARIS sonar camera to survey restored wetlands in San Francisco Bay, designed a custom camera system for monitoring fish passing through a fish ladder, and built a unique rigid weir for Cornell University.  We coordinated the sale of five Vaki Riverwatcher fish counters, constructed three giant fyke traps for the Bureau of Reclamation to monitor Chinook salmon on the Mokelumne River, and participated in electrofishing surveys to relocate predatory fish from Clifton Court Forebay in the Sacramento-San Joaquin River Delta with the Department of Water Resources.

2016 was definitely a year for adventures off the beaten track. In February, two of our staff ventured into the remote mountains of northern Myanmar, where they worked with Fauna and Flora International to survey streams for unique mountain fishes, and discuss conservation strategies with local villages. Another of our staff traveled by tractor to reach distant wetland sampling sites among the forests of Cambodia. We had our share of adventure in California during a habitat survey of the Upper Tuolumne River, which required navigating some Class-V whitewater rapids. We also traveled to Summit Lake, Nevada, to film a video about the Lahontan Cutthroat Trout and the fisheries work of the Summit Lake Paiute Tribe and the University of Nevada Reno. Our short film on studying fish on the Tuolumne River also made the rounds of a few film festivals in the San Francisco Bay Area.

We attended 13 interesting conferences and meetings this year, including the American Fisheries Society Meeting in Reno, Nevada (complete with a tour of the Monster Fish museum exhibit), the international conference for Fish Passage in Amherst, Massachusetts, and the Bay Delta Science Conference in Sacramento, California. We also traveled to Washington, D.C., to testify before Congress on the issue of predation, organized a session on aquatic protected areas (both marine and freshwater) at the World Fisheries Congress in Busan, Korea, and attended the IUCN World Conservation Congress in Honolulu, Hawaii. We hosted our own workshop on Fish Conservation Zones in Laos, and attended a number of meetings in Southeast Asia on hydropower, fish passage, and fisheries science. We also established a new fish conservation zone in Laos (complete with a blessing by Buddhist monks), conducted gill net surveys to assess fish biodiversity, studied the stomach contents of hundreds of fishes, and continued communications efforts for the Mekong Fish Network.

Around our offices, we added a Prius to our fleet of cars, planted a variety of different trees and peppers in our garden, made our own hot sauce, started aging our homebrewed beer in barrels, and brewed more than 300 gallons of beer following seven different recipes. We celebrated our 10-Year anniversary with a successful salmon run, a flashback blog series, and a video of then and now. It was another year of animal rescues, from saving a lucky tortoise from the soup pot in Laos, to relocating a young Swainson’s hawk from the middle of a busy road. Our Oakdale office also became nesting habitat for a visiting killdeer. On the education front, we trained students at Chico State University in how to do snorkel surveys of Big Chico Creek, visited a number of classrooms, and celebrated World Fish Migration Day with school students in Laos. We hope you enjoy our highlights videos of a busy year to cap off a great decade – we’re looking forward to many more exciting projects in the year ahead!