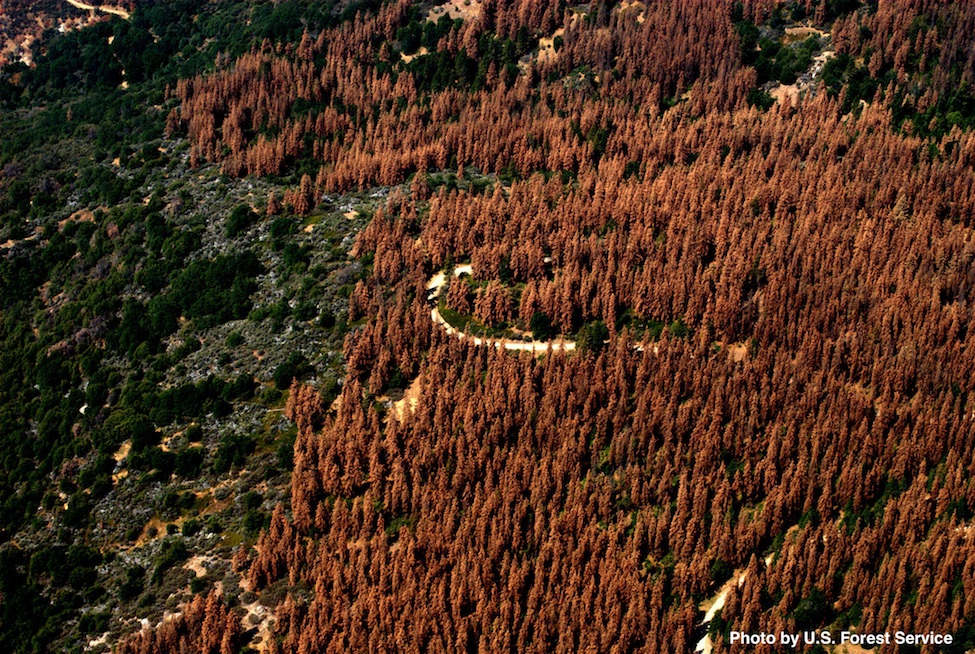 As the Western drought comes to the end of its fifth year, forests are revealing the toll the drought has taken. While trees have been dying off in massive numbers throughout the Sierras and Coast Ranges since 2010, the pace has accelerated greatly in recent years. The Forest Service recently released new estimates that more than 100 million pine, fir, and oak trees have died in California’s forests alone, with more deaths likely in the coming years. Many familiar places in California look drastically different today compared to just a year ago, as vast patches of mature green forests continue to turn orange in a matter of weeks. Aerial images show the magnitude and severity of the die-offs: blotches of brown expand across the land, leaving few survivors and showing no sign of slowing until the drought comes to an end. It seems shocking that huge areas of forest could die so quickly, but these visual indicators reflect years of stress and other conditions that combined to create the “perfect storm” for mass tree mortality.

Decreased water supply, increased temperatures, and overcrowding in forests due to fire suppression have created the opportunity for a native bark beetle epidemic, which has been accelerating die-offs at an unprecedented rate. Normally an integral part of a healthy forest, the mountain pine beetle (Dendroctonus ponderosae) and other native beetles play a role in decomposition and serve as a food source for other wildlife. However, trees such as the ponderosa pine (Pinus ponderosa) have become more susceptible to bark beetle infestations since the forests have been stressed by drought and overgrowth. Whereas healthy trees could fend-off bark beetle induced mortality, scientists believe that the drought and decreased winter precipitation has let the bark beetles get out of control, killing off drought-stressed trees in massive quantities.

Homeowners, agencies, and contractors are struggling to keep up with the rapid die-offs and remove dead trees before they become a safety hazard, especially because immense stands of dead trees create an increased risk for large wildfires. The governor of California issued a state of emergency in 2015 in response to California’s tree mortality and created a taskforce of state, federal, and local agencies to prioritize dead tree removal. According to many experts, unprecedented weather events and natural catastrophes such as these are becoming more common, especially in the West. Historically, regular small-intensity wildfires would naturally thin the forest while preserving most of the large trees. However, this natural system has been disrupted by practices such as fire suppression and planting trees of the same age, which along with the drought have greatly increased the occurrence of tree mortality and wildfires in California. The resulting loss of over-story and root systems is likely to disrupt the nutrient and energy cycle of the ecosystem, along with altering snowmelt timing and decreasing water quality (Edburg et al. 2012).

Fortunately, many practices are being revised as new research is continually presented on the best forest management options. Since there simply aren’t enough funds or time to manually thin out all areas of overgrown forest to prevent massive wildfires, agencies are now allowing some areas to burn naturally, while focusing their efforts on maintaining a buffer zone around communities. Forest restoration is also being used in key areas where the ecosystem and wildlife would most benefit from it. It is unclear how severe the economic and ecological impacts will be from the mass tree mortality because the crisis is the first of its size in modern history. This makes predicting and dealing with this natural disaster a challenge for everyone. With the State Water Resources Control Board recently issuing long-term water conservation rules for residents in preparation for a longer drought, it’s clear that both people and forests have to adjust to changes in our changing world.