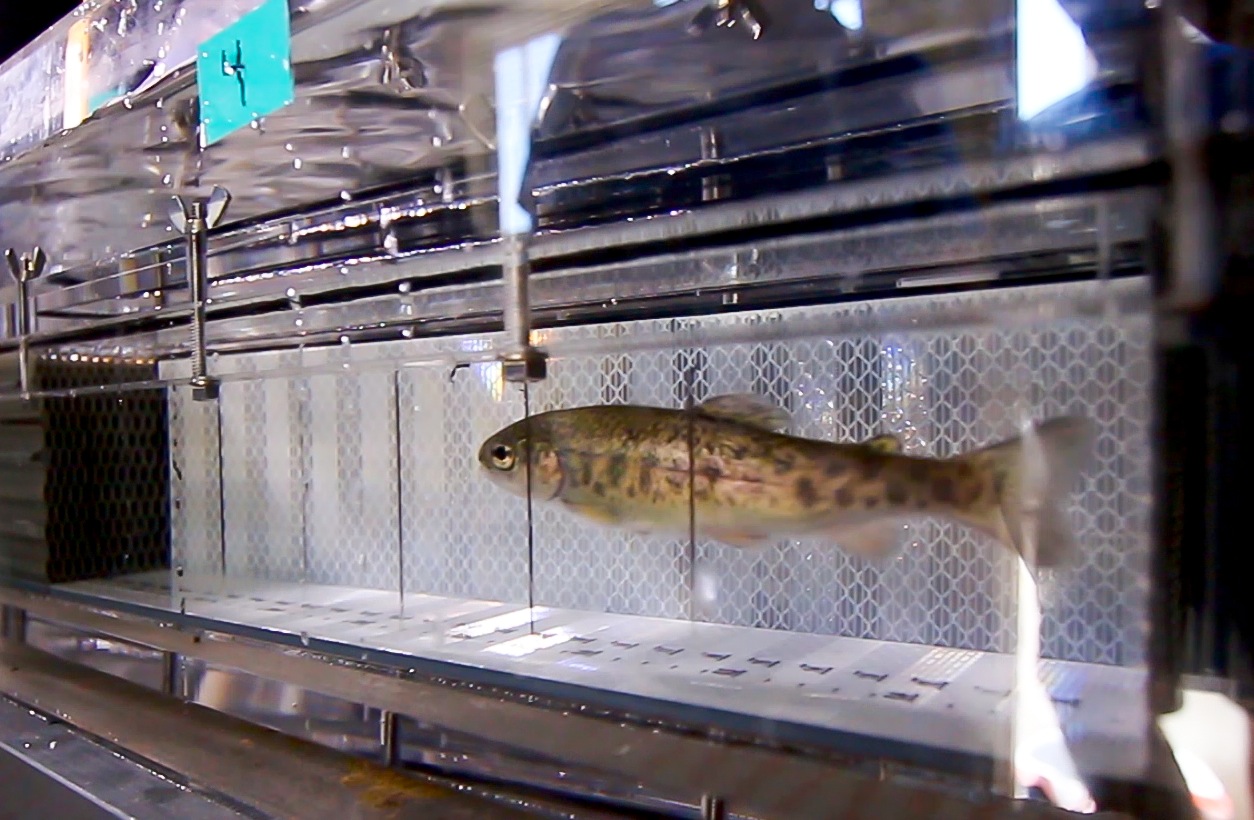 When salmon and trout are exposed to very high temperatures, they often die. Thanks to the study of physiology, we now know that one cause of death in fish living at high temperatures can be a heart attack – fishes’ hearts try to speed up to accommodate the warm temperatures, but eventually can’t keep up. Physiology is the study of how an animal’s body functions and responds to its environment. In fishes, physiology studies often involve measuring factors such as swimming performance, heart rate, oxygen consumption, body chemistry and hormones, and survival under a variety of conditions. Knowledge of fish physiology is essential for managing fish populations, especially in modified waterways like those of California’s Central Valley.

To study potential impacts of temperature on fish, scientists at FISHBIO have used swim tunnel respirometers (which are like treadmills for fishes) to measure the metabolic rate of Central Valley steelhead while they were resting and swimming at a range of temperatures. The difference between a fish’s resting and swimming metabolic rates is called ‘aerobic scope’ because it is the scope or range of the fish’s ability to increase its metabolism. A steelhead’s aerobic scope is usually quite large, but becomes very small at high water temperatures. This is because at very warm temperatures, the heart reaches a point where it cannot speed up any more, even though the fish is just resting – the fish’s resting metabolic rate becomes almost as high as its swimming metabolic rate. Fish are in big trouble when their aerobic scope approaches zero because their hearts cannot pump enough to support swimming, eating, or escaping predators. In this study, we were able to identify the temperatures at which the fish’s aerobic scope became dangerously narrow. Knowing this relationship between water temperature and Central Valley steelhead and salmon aerobic scope can inform more efficient management of water resources to best protect the fish.

Such physiological studies can provide many valuable insights to inform fish conservation and management. These include how fishes respond to and tolerate a range of environmental conditions, and how fish bodies and internal processes change throughout different life stages (including smoltification and reproduction). Physiological studies can also reveal the extent to which individuals within and among populations vary in their physiological responses, and which stressors produce particular physiological consequences in fishes. Although population-level monitoring and tracking studies, such as surveying fish abundances, movements, and habitat use, are also essential tools for fish conservation, many important questions can only be addressed by studying physiology.

Physiological tools are particularly valuable for improving predictions of how fish populations will respond when faced with novel conditions. When creating management plans, scientists often look at population monitoring data to determine how fish populations responded to a set of environmental conditions in the past, and use this information to predict how a population will respond to contemporary or future conditions. However, without knowing the underlying mechanism that determined why populations responded in a certain way, we can only reliably use this approach to predict population responses under conditions that have been observed in the past. In contrast, physiological tools that measure the responses of individual fish to environmental changes can be combined with population monitoring to actually explain why population characteristics change, and can therefore be used to predict population responses to novel conditions in nature.

For example, a study on the metabolic responses of coral reef fishes to warm temperatures, similar to the work of FISHBIO scientists in California, has provided essential knowledge for scientists’ predictions of how global warming will affect fish populations. Scientists have learned that marine species living near the equator are more susceptible to warming water temperatures due to global climate change than fish living at higher latitudes (Rummer et al 2014). This is because the warm equatorial water is already close to the highest temperatures that fish living there can tolerate. These findings may have relevance for salmon and steelhead populations in California, which are living at the most southern and warmest limit of their global distribution.

Global climate change and rising human water demands make balancing the health of wildlife and the requirements of growing human populations increasingly challenging. Results of physiological studies are a powerful asset for developing management policies that allow both society and aquatic species to utilize river resources. However, when it comes to salmon and steelhead in the Central Valley, there are few studies related to the physiological effects of temperature, partly due to challenges of conducting on-site studies with wild fish, which limits our understanding of how these fish will respond to temperature changes. This lack of studies on local populations also means that temperature studies conducted in more northern and cooler climates are usually the basis for developing temperature tolerances and management criteria for southern populations, which may not be relevant. With the new FISHBIO wet lab up and running, we are excited to incorporate physiological tools into our fisheries work to find ways to best recover and restore California fishes, while still maintaining water resources for the future.