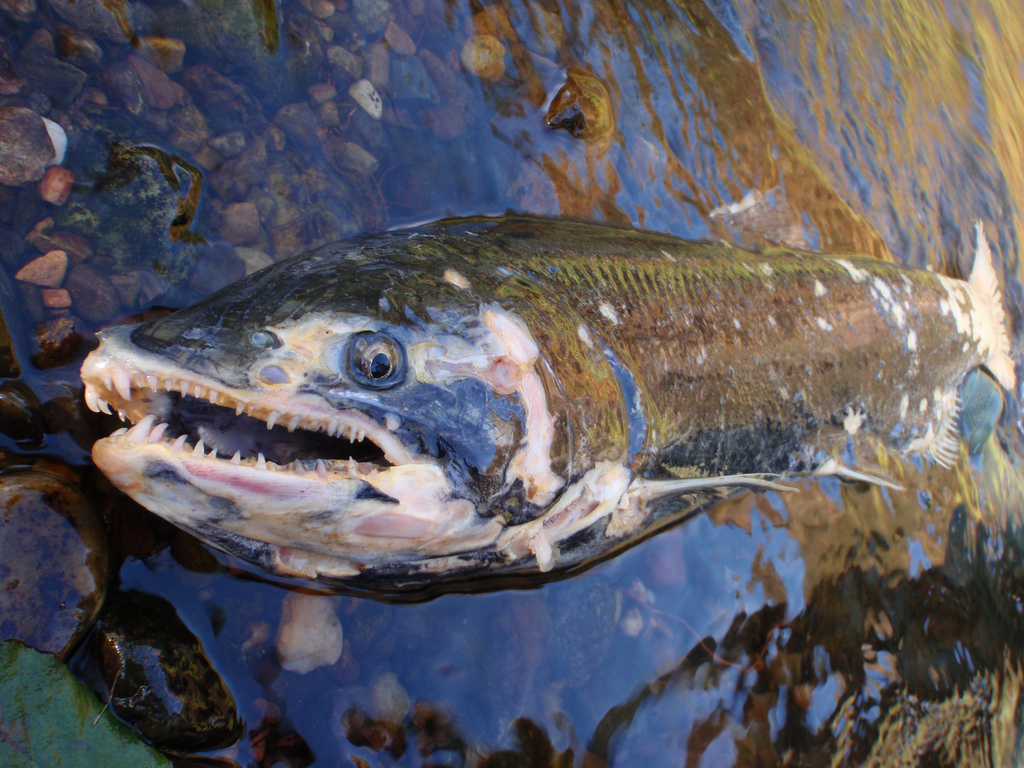 As the seasons change and the days grow shorter, the Chinook salmon spawning season in the Klamath Basin is well underway. As salmon return to the Klamath and Trinity Rivers, recent water releases have occurred in both systems in an attempt to prevent a fish die-off like one that occurred 12 years ago. The reason for the water releases is the discovery of the parasite Ichthyophthirius multifiliis (commonly known as ich; pronounced “ick”) in a relatively high proportion of fish sampled from the Klamath River. This historic drought year has produced perfect conditions for an outbreak of the deadly parasite – low flows, high temperatures, and high densities of adult fish.

The protozoan parasite ich is a common disease among freshwater fish, and has been found in watersheds worldwide. The largest outbreak among salmonid species occurred in the Klamath Basin in 2002, when ich was responsible for the largest salmon die-off in the history of the American West. The disease is sometimes referred to as white-spot disease because infected fish appear to have salt-like flecks on their bodies and gills, and it can spread quickly in warm and crowded conditions. In this instance, water releases were the only tool that regulators and fisheries biologists had to slow the spread of the disease, as higher flows can result in lower temperatures (which slow the life cycle of the parasite) and lessen crowding of fish (which slows the movement of the parasite from one fish to the next).

Ichthyophthirius multifiliis is a protozoan with three distinct life stages that can be completed in as little time as four days (at a temperature of 24 °C), or more than five weeks (at a temperature of 7 °C) (Durborow et al. 1998). The first stage is the feeding stage (a single-celled organism called a trophozoite), in which the protozoan feeds in a nodule formed on the skin or gills of the salmon. After feeding, the protozoan (now called a tomont) falls off the fish and adheres to plants, gravel, or sediment, where it encysts. In the river’s substrate, the tomont can divide multiple times by binary fission to produce hundreds of microscopic tomites, which ultimately burst from the cyst and drift into the water column. The tomites quickly develop cilia, producing an infective stage called theronts, which begin actively swimming in search of a new host to begin the life cycle again.

On September 15 of this year, the U.S. Fish and Wildlife Service’s (USFWS) Fish Health Center examined 20 fish from the lower Klamath River and found the ich parasite present in nine of those fish, with six cases being considered severe. The Bureau of Reclamation, in accordance with the emergency response criteria outlined by USFWS and the National Marine Fisheries Service in August 2013, immediately began increasing water releases from the Lewiston Dam on the Trinity River to double the flow rate in the lower Klamath River (which the Trinity flows into) to approximately 5,000 cubic feet per second. While it appears that these flows helped curb the spread of the deadly fish parasite in the lower river, the releases into the Trinity River did not counteract the warm and low flows in the Klamath River upstream of the confluence. Additional sampling revealed that the majority of both Coho and Chinook salmon in the upper and mid Klamath River were infected with the deadly parasite.

To help curb the spread of ich into the upper stretches of the river, the Bureau of Reclamation began increasing water releases by 75 percent out of PacifiCorp’s Iron Gate Dam on the Klamath River on October 4. The increase in flows lasted ten days and used an estimated 16,000 acre-feet of water from PacifiCorp reservoirs.  According to the Bureau, the water releases from Iron Gate Dam had no effect on the water levels of Upper Klamath Lake, home to the endangered Lost River and shortnose suckers. Although the water from these upper reservoirs is often warm and sometimes riddled with toxic algae, it seems as if the timely water releases have cooled the river enough to avoid a fish die-off in the Klamath Basin. While water conservation is key in times of drought, the potentially disastrous impacts of ich require prompt action to protect salmon populations.