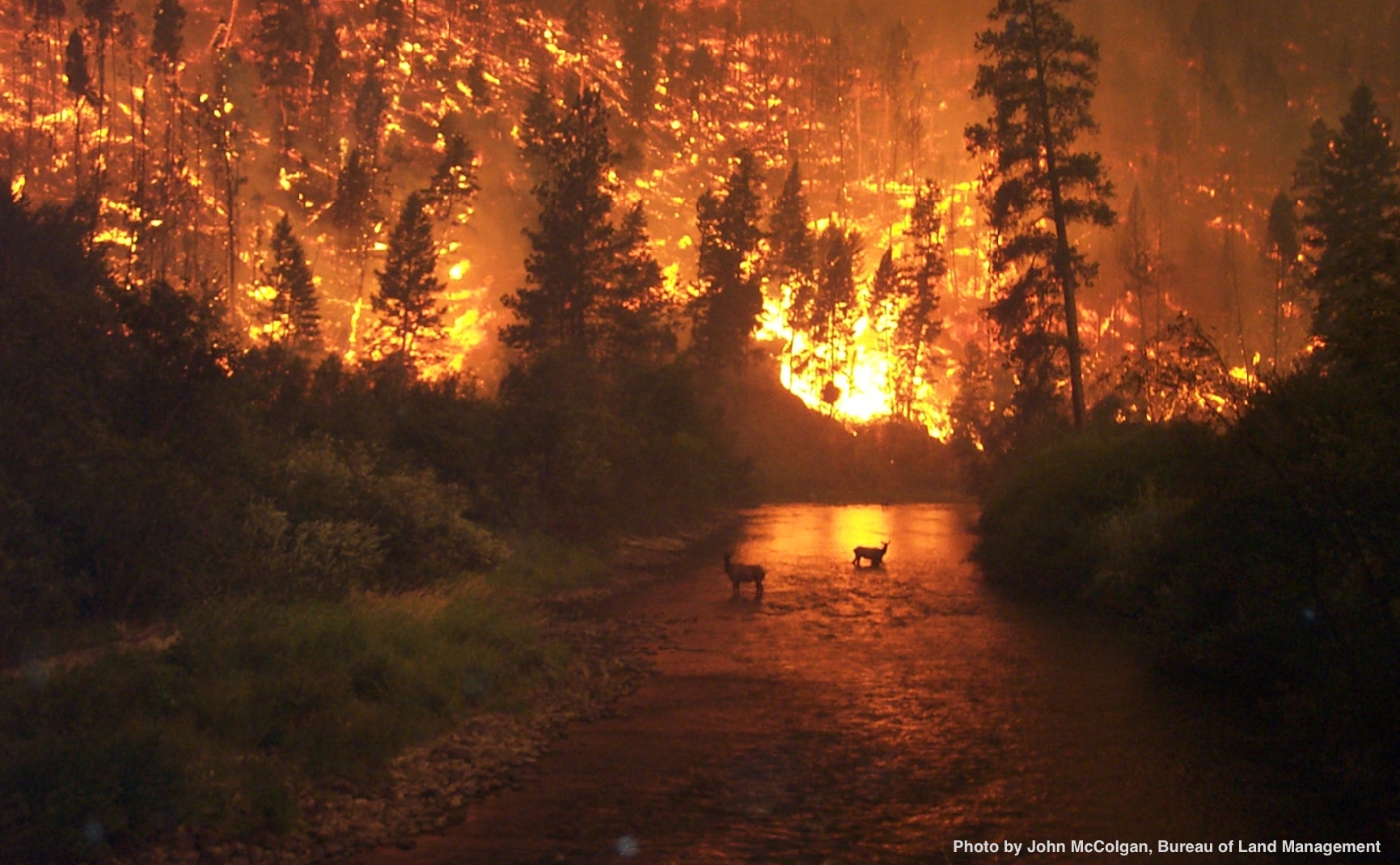 It is fire season once again in the American West, and with it comes a litany of frightening news headlines announcing economic and ecological devastation. (Wildfire Leaves ‘Complete Devastation’ in Rural Community, “B.C. Wildfire’s Impact on Animals ‘To be Horrific’”). The last three decades have witnessed massive changes in fires across the region.  Scientists who study fire regimes, which are the duration, interval, intensity and size of fires across a landscape’s history, have found that wildfires have not only become more frequent, but have also increased in intensity (burning hotter and longer) and are burning larger areas (Westerling et al. 2006). These changes in fire regimes (from characteristic historical fires to uncharacteristic mega-fires) are a result of changes in climate, most notably warming temperatures and prolonged droughts that lengthen the fire season, as well as policies of fire suppression that have led to a buildup of fuels. The wildland-urban interface, or the zone where houses and urban development meet undeveloped vegetation, has also rapidly expanded over the last three decades, resulting in more burned homes and forced evacuations (Rasker 2015). The cost of fire suppression and fuel management alone now totals tens of billions of dollars, but can be vastly greater when considering societal costs such as emergency services or post-fire rehabilitation (Hoover and Bracmort 2015). It is unlikely that trends in climate change or human development will abate anytime in the future. Fortunately, society can take steps to minimize the impacts of changing fire regimes, and can also manage for the positive impacts of fires.

Despite the negative consequences of uncharacteristically large wildfires, scientists now understand that wildfires can play a beneficial role in fire-prone ecosystems. Recently, scientists have called for a paradigm shift in how the public and managers view wildfires (Schoennagel et al. 2017, Kelly and Brotons 2017). They point out that wildfires are natural disturbances that have a way of “resetting” an ecosystem by altering the physical structure and changing nutrient inputs. Wildfires may even promote species diversity. “Pyrodiversity” is defined as the diversity of a fire regime, and describes how a particular landscape might be influenced by wildfires. For example, two otherwise identical landscapes would look very different if one had a fire regime of small fires burning every two years, while the other had a single large fire burn every 10 years. The landscape with more frequent, smaller fires would likely host a greater diversity of habitats and species (due to the varying stages of post-fire recovery) than the landscape burned by a single large fire. Thus, pyrodiversity begets biodiversity. Recognizing wildfires as a structuring force in fire-prone ecosystems changes the perspective of fires as solely destructive events that should be suppressed to one of managing for fires to maximize their ecosystem benefits while mitigating for changing fire regimes.

Environmental legacy effects of large fires, like the 2013 Rim Fire in California, include impacts on fish populations from increased runoff of fine sediments, debris, and mud slides in the first five years. Researchers that followed 17 years of fire disturbance on stream habitats in Idaho found these short-term negative effects were more pronounced following uncharacteristically large fires. Yet, trout populations and habitat conditions had dramatically improved five to 10 years after a fire, regardless of fire severity (Burton 2005). Stream fish appear to benefit from post-fire flooding events that scour away fine sediments and deposit large woody debris in the stream. This cleaning of the riverbed can increase the quality and availability of food and provide spawning habitat. Large wood that falls into streams helps create scour pools and increases habitat complexity. Another study comparing genetic diversity in rainbow trout populations affected by wildfires found that populations in unfragmented streams exhibited no loss of genetic diversity after fire, but nonnative fishes and fragmentation by road culverts might have contributed to less genetic resiliency in other rainbow trout populations (Neville et al 2009).  Clearly, the effects of fire-related disturbances on aquatic ecosystems are varied and complex.

So how can wildfires be used positively to promote healthy ecosystems that benefit fish and wildlife, while minimizing impacts on humans? Guidelines to help shift management policy should focus on adaptive resilience, which means planning for fire regime changes to limit vulnerability of people and wildlife (Schoennagel et al. (2017). We need to recognize that regional fire trends are not affected by fuel reduction practices (Barnett et al 2016); however, targeted fuel reduction can help the local ecosystem and residential communities adapt to changing fire regimes. Actively managed fires and prescribed burns can help promote pyrodiversity, while the use of incentives and risk management in residential planning can promote fire resilient neighborhoods at the wildland-urban interface. Wildfires are inevitable, but by shifting our perspective, we just might be able to reduce the ecological and economic impacts of uncharacteristic wildfires in the future.