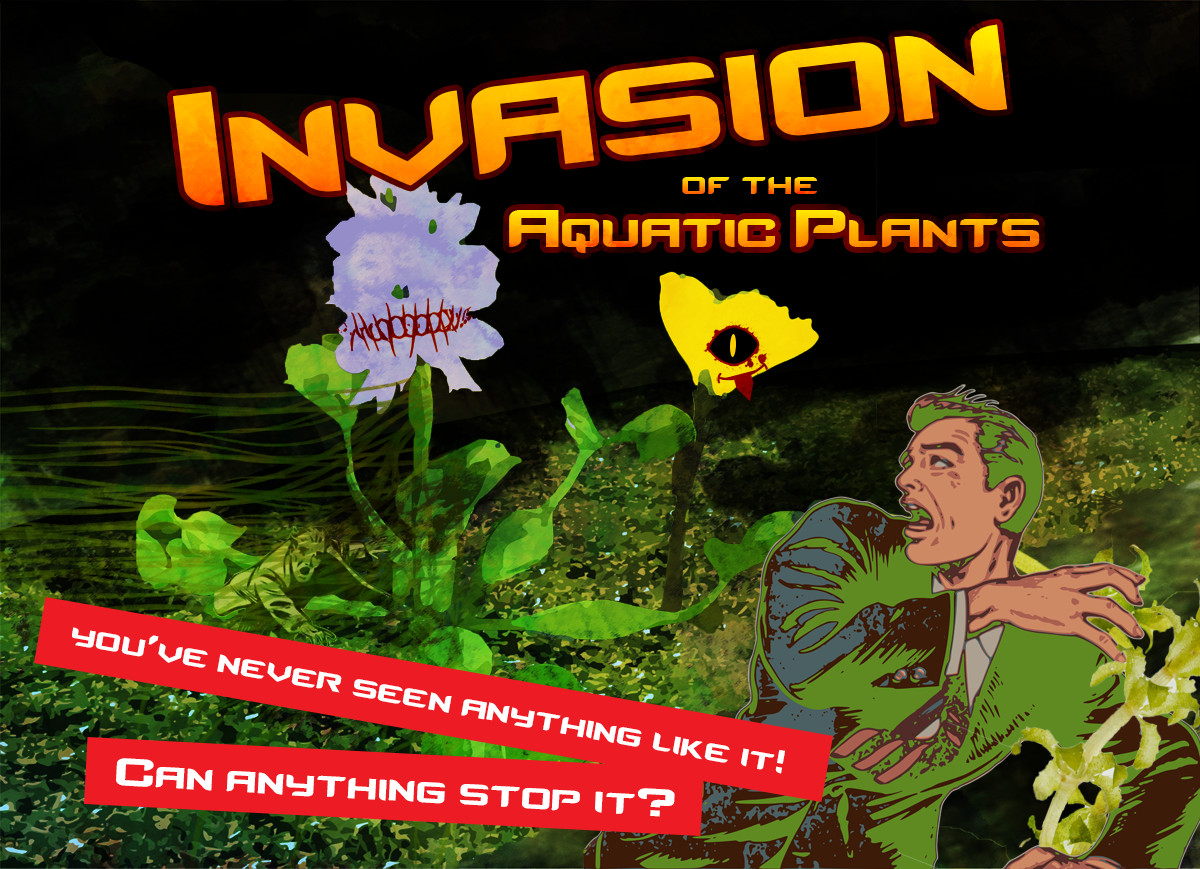 While it may sound like a B-rated Halloween movie, parts of California really are under a floral invasion. Non-native species introductions are a familiar topic in the Sacramento–San Joaquin Delta when it comes to animal species, but the Delta faces significant pressures from plant invaders as well. The California Department of Fish and Wildlife defines an invasive aquatic plant as any aquatic plant or algae species whose proliferation or dominant colonization causes ecological or economic harm. Such invaders can also harm public health, and can have a significant socio-economic impact by impeding recreation and water operations for agricultural, municipal, and industrial needs. One of the more recent examples is the water hyacinth invasion of the Port of Stockton, which shut down an annual boat parade and significantly affected shipping access. In addition to hyacinth, there are other alien plant species of concern found throughout the Delta region and its tributaries.

On September 15, the Delta Stewardship Council Delta Science Program, the Delta Conservancy, and the UC Davis Department of Environmental Science and Policy hosted The Symposium on Invasive Aquatic Vegetation in the Sacramento-San Joaquin Delta at the University of California, Davis, to facilitate communication, collaboration, and management around invasive aquatic plant species. Speakers discussed a wide variety of topics, including several species of concern in the region, what’s being done to control them, and the threats they pose to the Delta ecosystem. Cliff Dahm of the Delta Science Program noted that the biomass of non-native plants in the Delta seems relatively high in comparison to other systems worldwide, and may be exacerbated by the drought.

Although there are a wide variety of non-native aquatic plants with which to contend, speakers highlighted several species that are of significant concern in the Delta region. Water hyacinth (Eichhornia crassipes), originally believed to be introduced to the United States from its native range in the Amazon River in 1884, reached California by 1907. It has been found throughout the Delta and has been observed creating significant blockages of the San Joaquin River and Tuolumne River (see Hyacinth Woes: From A Gift To A Curse). Proliferation of hyacinth can occur by several methods: water-borne seeds, fragmentation of established plants, vegetative growth by rhizomes, and by watercraft inadvertently transporting it into new waterways. Once water hyacinth has become established in a system, it can quickly dominate a waterway due to its ability to double its biomass in roughly seven to eight days.

The water primrose (Ludwigia hexapetala) was another focus of the symposium. One presenter, Shruti Khanna of UC Davis, is involved with mapping invasive species in the Delta and could not stress enough that compared to water hyacinth, water primrose is the real problem of the future. Its native range is waterways in Uruguay, and it has been naturalized in California for at least 25 years, but has only been considered invasive for the last 5 years. Growing along the margins of rivers, lakes, and ponds, it also forms dense mats of vegetation. However, unlike water hyacinth, the primrose’s tissues become more woody over time, making removal all the more difficult. The dense growth of these mats can impact water movement, block out native plants, and reduce the habitat of both fish and waterbirds. Not only does primrose pose a threat to the waterways, it can also choke out native plants along the shoreline due to its creeping, emergent growth. 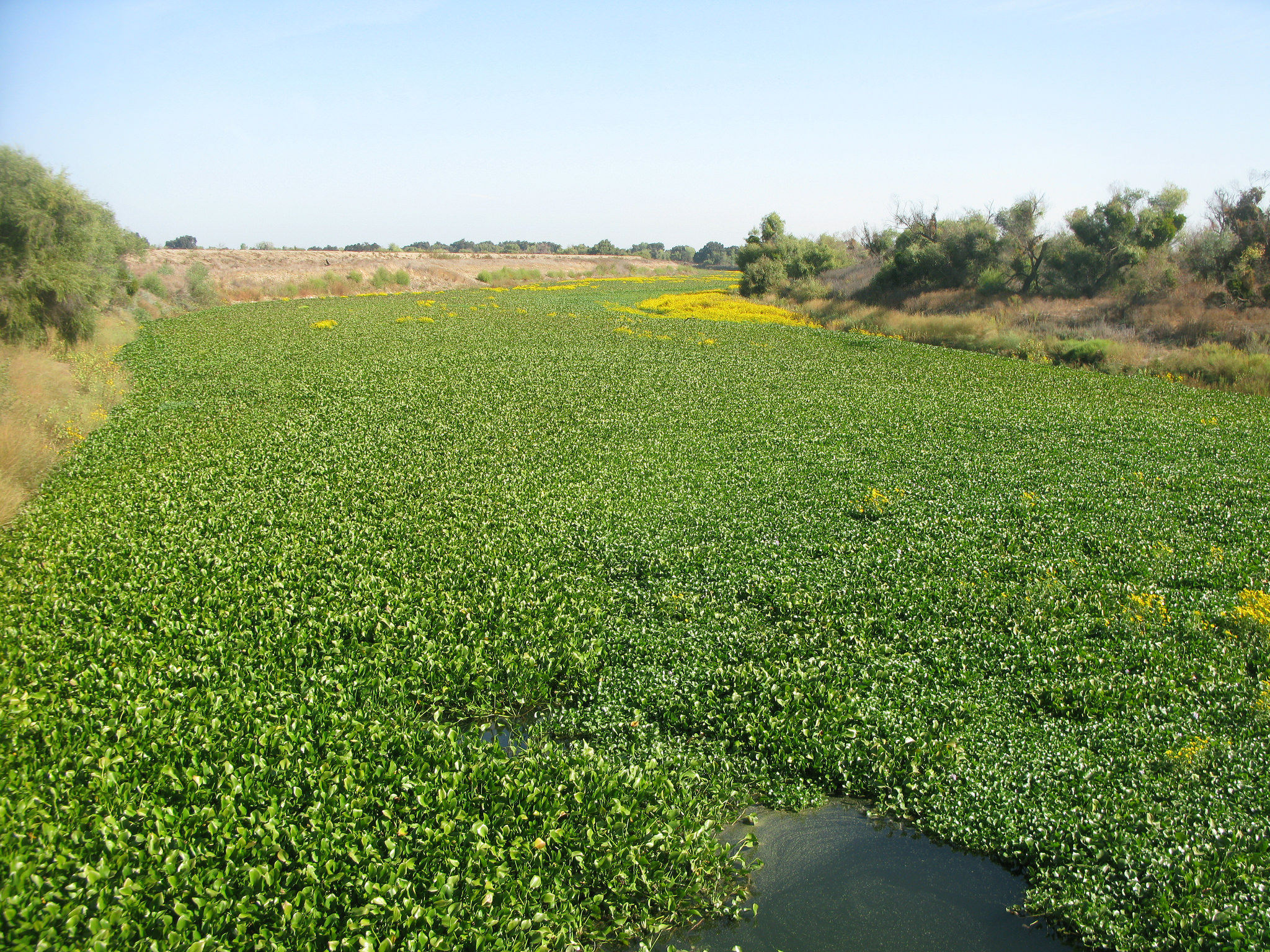 California can learn from Florida’s experience developing their successful aquatic plant management programs. Hyacinth was originally introduced to Florida in 1890, and for the past 40 years, the state has been able to significantly reduce its total coverage by practicing an adaptive management program. Jeff Shardt, a symposium speaker from Florida’s Fish and Wildlife Commission, shared that the group constantly reevaluates their priorities based on public water usage, and conducts annual assessments to detect, prioritize, and evaluate new or current infestations. Floating plants are given first priority in management, followed by plants that may be blocking access and the navigation of waterways. He went on to stress the need to manage water hyacinth infestations year-round, specifically during the colder months where its growth ability becomes significantly impaired.

Recent surveys of both the San Joaquin and Tuolumne rivers by our field team have shown significant water hyacinth blockages at numerous sites throughout the system. Although the severity of the blockages has decreased at several sites, the plants have persisted over the past year of surveys. Several of these sites exhibit hyacinth affected by chemical treatments applied by the Department of Boating and Waterways; however, due to the plant’s vigor and new recruitment, these damaged areas can usually be found enveloped in fresh growth. While there is no sure eradication method, hopefully with continued management these hyacinth infestations can be reduced to more controllable levels, and emerging threats from other species can be contained.