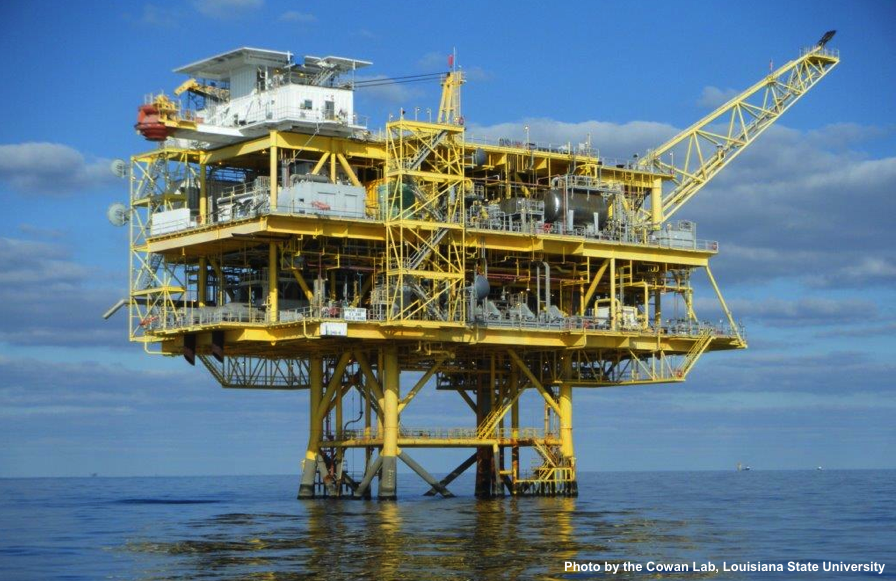 Picturing the ocean’s edge often brings to mind a broad, untouched skyline, broken only by birds and clouds. But in places like the southern California coast and the Gulf of Mexico, that flat horizon is transformed into a skyline dotted with towering man-made structures and lights glowing at night. These are offshore oil rigs (or platforms), and their role in the marine environment is highly debated. Despite their economic value, oil platforms can be an unpleasant sight, and have also been responsible for some of the worst environmental disasters in American history, including the Deepwater Horizon oil spill in the Gulf of Mexico in 2010, and more recently the Santa Barbara oil spill off the California coast in 2015. However, studies suggest these structures may provide shelter and prey resources for a variety of marine species, making them a valuable marine habitat.

Oil platforms vary in size and are located at a range of depths, from shallow (30 m) to deep waters (more than 200 m). Federal law requires these structures to be removed once they are no longer producing oil/gas, which also means potentially removing critical habitat for many marine organisms. In the Gulf of Mexico, a program called Rigs-to-Reefs allows decommissioned structures to be toppled and positioned to continue providing habitat and hard substrate for marine invertebrates and fish. In 2010, California adopted its own version of Rigs-to-Reefs, in which platforms may be toppled or partially removed on a case-by-case basis; however, no platforms have yet been toppled as part of the program. To date, there are 23 standing oil and gas platforms installed in federal waters and four in state waters off California. For comparison, more than 2,300 active oil and gas platforms currently stand in the Gulf of Mexico, and they are now being removed at a record rate before scientists and stakeholders can evaluate the potential risks to fisheries this may cause. 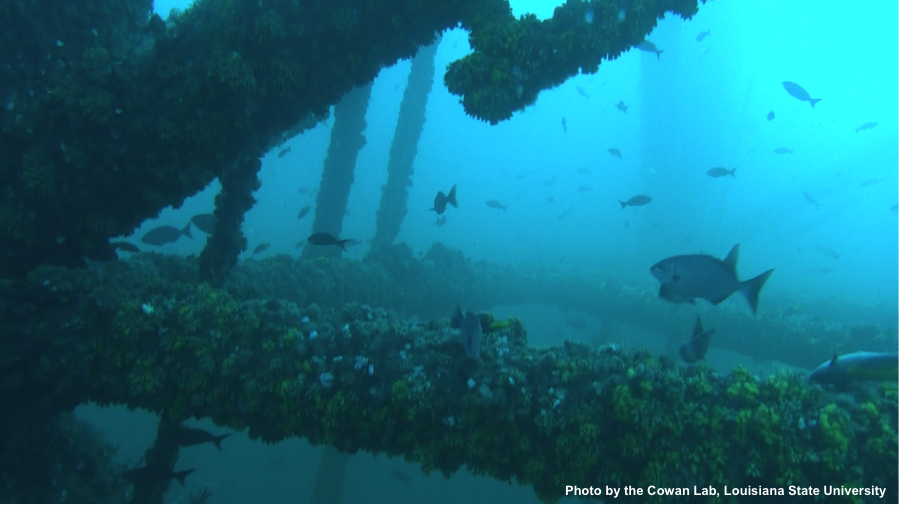 Worldwide, oil platforms provoke debate about their ecological role regarding whether they 1) actually produce more fish by providing critical habitat where fish can reproduce (i.e. production hypothesis) or 2) simply aggregate existing fish as a refuge that attracts fish and predators, such as larger fish or fishermen (i.e. attraction hypothesis) (Daigle et al. 2013). Much ongoing research is working to better elucidate the role of these artificial reefs as fish habitat, in light of recent U.S. government estimates that suggest all the quantity of oil and gas produced at California’s offshore platforms will cease to be economically viable in the next 15 years. A recent study by Claisse et al. (2014) concluded that at oil and gas platforms off the coast of California, associated animals grow more (produce more biomass) per swath of seafloor than in any other marine habitat that has been studied, suggesting these platforms should be considered valuable habitat for important fish species such as rockfish (genus Sebastes). 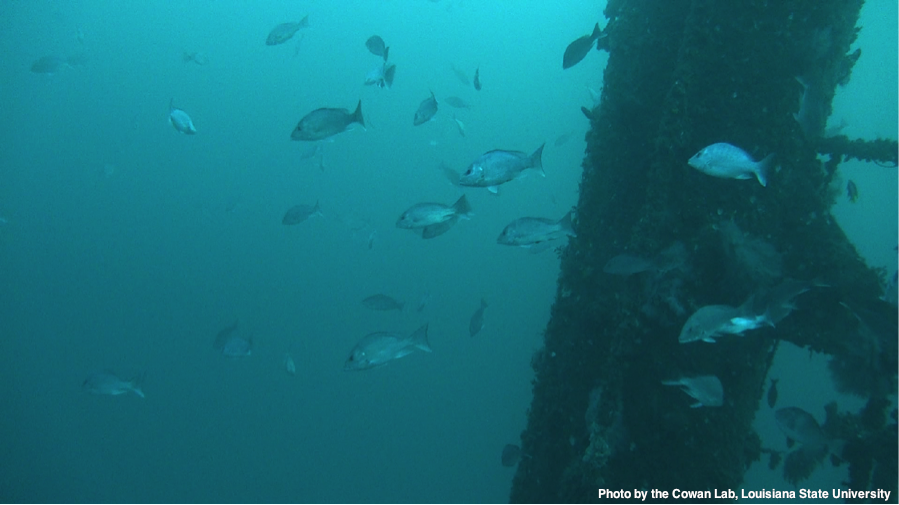 Similar research is ongoing in the Gulf of Mexico to determine if these dominant structures have an ecological impact on fish communities. Non-invasive sampling methods involving hydracoustic and video surveys are being used to better determine which fish species are using oil platforms and how they are distributed around the structures (Reynolds 2015). One species of interest found in abundance at platforms is the economically and ecologically important red snapper (Lutjanus campechanus). Despite their abundance at oil platforms, previous studies reported these fish are actually in better nutritional condition at natural banks in the Gulf of Mexico compared to toppled artificial structures nearby (Schwartzkopf 2014). This could mean the platforms may not be functioning as well as natural habitats, as once thought. Natural banks have also been noted to support more diverse fish communities than artificial reefs (Langland 2015). Additional research is necessary to determine how much benefit structures really confer on red snapper compared to natural habitats, as well as more studies comparing platforms across varying habitats, depths, and substrates in the Gulf of Mexico.

Oil platforms are a complex topic that bring both benefits and risks, and can influence the environment in a variety of ways long after they’ve served their primary purpose. These structures may even be able to contribute to energy collection in the future by harvesting wind or tidal energy if used correctly. It’s worth contemplating how oil platforms have changed the environment for fish with their installation, and how they may further change that environment with their removal.