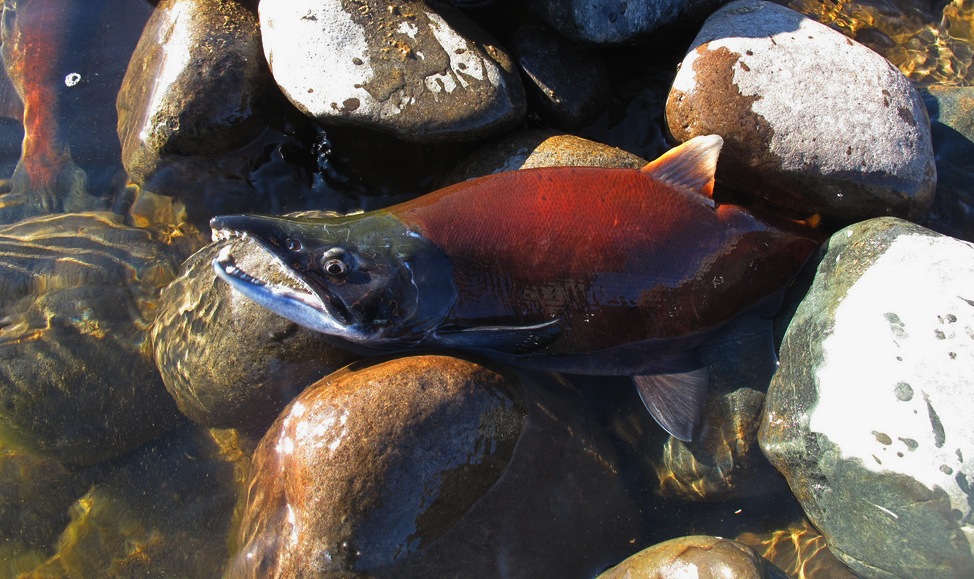 It’s been said that whiskey is for drinking and water is for fighting over. In this third year of one of the worst droughts in California history, these words most certainly ring true. The Klamath and Trinity Rivers in the northwest corner of the state have long histories of bitter water wars. Now, the current water balancing act to help Chinook salmon has lead to a fish kill of Kokanee salmon on the Trinity River’s Lewiston Lake, illustrating how one fish species can become collateral damage in the effort to save another.

The event occurred in an attempt to prevent another kind of fish kill from repeating itself. During similar drought conditions in 2002, low water levels lead to a large-scale die-off of thousands of Chinook salmon trying to enter the Lower Klamath River, which is partially fed by the Trinity River. More than 30,000 salmon were killed after being bunched together in small, warm-water pools, which created an environment where the common fish parasite ich (Ichthyophthirius multifiliis) was able to spread rapidly among the population. During this event, flows on the Klamath were recorded as low as 475 cubic feet per second (cfs), which were the fifth lowest flows in the period between 1978 and 2002.

To prevent another Chinook die-off of this scale happening now, a decision was made at the end of August to increase the current river flow from Lewiston Dam, with the goal to keep the Lower Klamath River at roughly 2,500 cfs until September 14th. This decision comes at a time when Trinity Lake, the reservoir upstream that feeds Lewiston Lake, currently stands at 28 percent capacity. The salmon fishery is an important part of the local economy in communities found along the Trinity and Klamath Rivers, particularly among local tribes. The decision to protect the Chinook salmon down river was weighed against the need to protect the water supply.

However, with the current low water level in Trinity Lake, resident Kokanee salmon smolts are now finding their way into the water being released to Lewiston Lake, and observations of 200-400 smolt mortalities recently surfaced around the lower reservoir, although other estimates are in the thousands. The Bureau of Reclamation and the California Department of Fish and Wildlife determined that the Kokanee were moving deeper into the lake to seek cooler water, and were drawn into the intake structure. The sudden change in pressure the fish experienced passing through the dam led to their death.

Kokanee salmon, a land-locked version of sockeye salmon (Oncorhynchus nerka), are commonly introduced to lakes and reservoirs as a popular sport fish. As a result, they have substantial populations, spread widely across the western United States and are a species of least concern of the IUCN Red List. Chinook salmon (Oncorhynchus tshawytscha) are anadromous salmonids, meaning they spend much of their adult life in the ocean and return to freshwater for spawning and rearing. California coastal Chinook salmon, whose range includes the rivers and streams south of the Klamath River to the Russian River, were federally listed as a threatened species in 1999 due to concern over diminishing population sizes. As salmonids, both species require cool, clean water for optimal health and quality habitat. But in a year where there doesn’t appear to be enough water to go around, one species unintentionally paid the price to help the other.

As we progress further into this historic drought, difficult decisions that weigh water use and wildlife must be made with care. Unforeseen events like this, or ones like the desiccation of fall-run Chinook salmon eggs in the Sacramento River in an attempt to help winter-run Chinook and steelhead, may become more common as low water conditions become more prevalent across the state. The struggle to balance the needs of agriculture, wildlife, and urban water uses has always been a difficult one with no easy answers. But one thing is obvious: water conservation is the responsibility of all Californians, even during periods of normal precipitation. For a list of ways to help you conserve, see saveourwater.com.