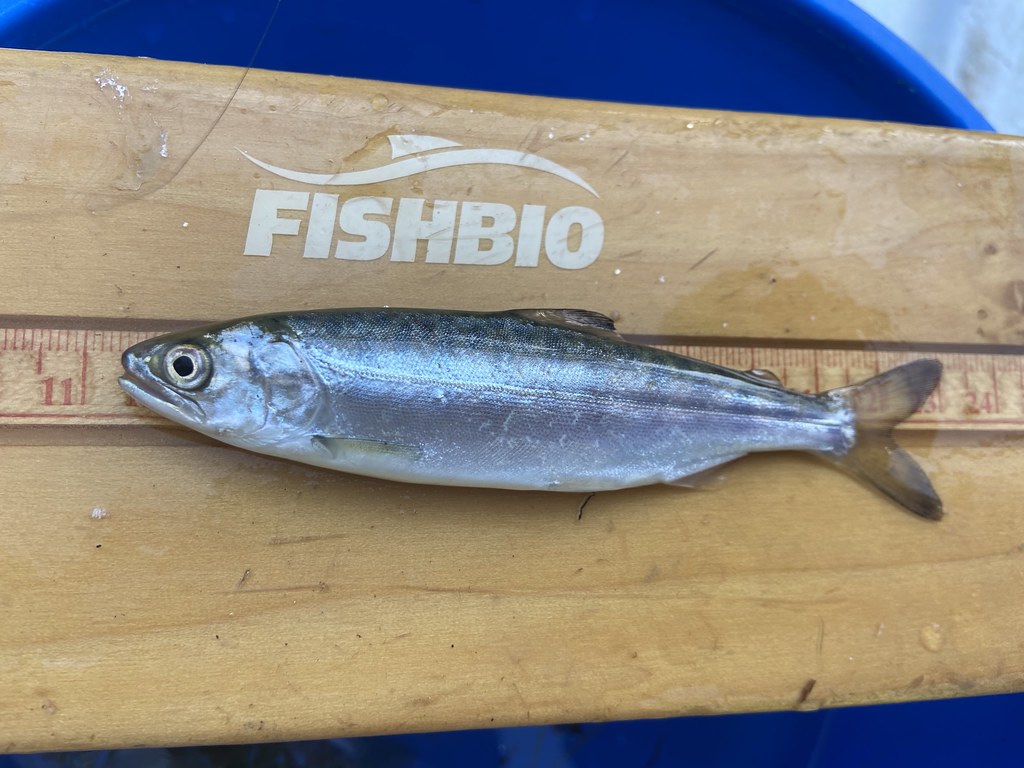 Evading a barrage of hungry mouths is a challenge for any young migrating salmon, but directly observing and quantifying predation isn’t easy when both predators and prey live hidden away underwater. Other challenges include understanding these predation dynamics at a large scale, such as across a watershed, and understanding how they are shaped by environmental factors such as habitat and temperature. Fortunately, statistical models provide a way to analyze and understand complex processes like predation and offer guidance for fisheries and water management. One such model constructed by National Marine Fisheries Service (NMFS) scientists focused on estimating juvenile Chinook salmon (Oncorhynchus tshawytscha) predation risk across the South Sacramento-San Joaquin Delta (Michel et al. 2020). By evaluating predation risk day by day and kilometer by kilometer in the region throughout the juvenile salmon migration season, this model sought to pinpoint locations and environmental factors associated with salmon predation. The resulting insights can help managers give beleaguered baby salmon a better chance of surviving the deadly gauntlet of piscine predators.

The researchers selected sample sites across the lower San Joaquin River and South Delta, as Chinook migrating through this region are known to have extremely low survival. Predation Event Recorders (PERs) – which consist of a buoy, a tethered hatchery juvenile Chinook salmon, a GPS tracker, predation-triggered timer, and a camera – were deployed to measure relative predation risk. The PERs were deployed at the upstream end of each one-kilometer-long study site and allowed to drift downstream at dusk, a period when predators are known to be more active. Multiple environmental variables were also measured at each site, including submerged aquatic vegetation, habitat complexity, water temperature, and predator density. These data were then incorporated into models to estimate the risk of predation to juvenile salmon across the entire South Delta. Estimates of relative predation risk were also used to estimate Chinook survival through the Delta along two migration routes: the San Joaquin River and Old River.

Importantly, the estimates in this study are not an exact measure of survival because the tethered salmon couldn’t evade predators, the trials were conducted when predators were most active, and calculations assumed that juvenile salmon would pass through each reach in a standard amount of time. Despite these caveats, this method still provides insight into changes in predation risk across the months of April and May when the study took place. The model that best described salmon predation risk included several key variables. Bottom roughness, warmer temperatures, and higher predator density all corresponded to increased predation risk. Predation risk also increased dramatically after sunset. Overall, both migratory routes had lower survival in May than they did in early spring, and by late May survival in the San Joaquin River was higher than the Old River Route.  Trawl surveys in the South Delta indicated that in 2017, most juvenile Chinook entered the Delta during the period when predicted survival was at its lowest.

Managers can address some of the habitat features associated with increased predator densities by modifying them to reduce predation risk. However, this study demonstrates that predation is also an issue of timing as well as location. Strategically timing the release of hatchery salmon or outmigration cues for wild salmon (such as increased flows) may allow them to pass through the South Delta when predation risk is lowest. Studies like these make it possible to incorporate environmental influences on predation into the ecological models that are increasingly being used to evaluate management actions in the Delta, and better understand  juvenile Chinook survival and mortality. Such information may prove useful in helping baby salmon go from predator entrée to successful emigrant.