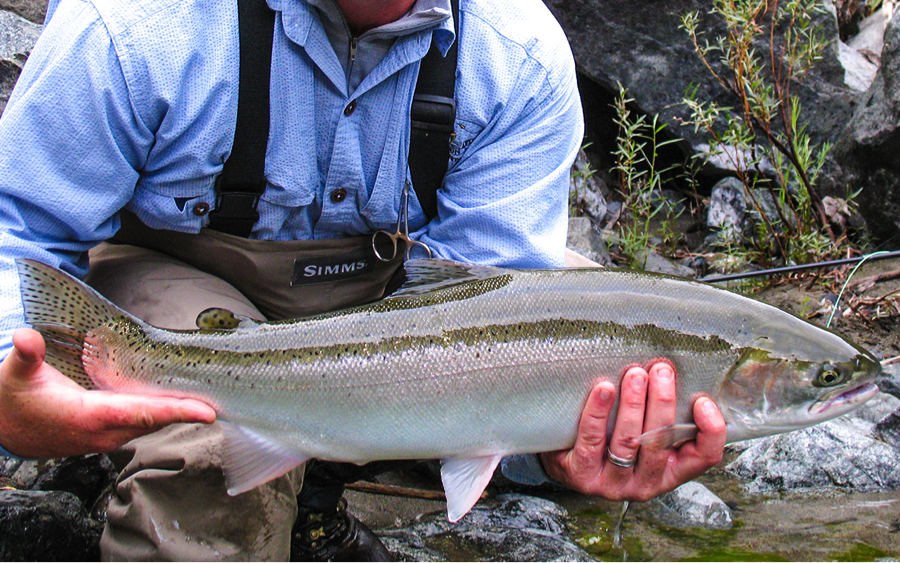 Diversity among fish populations helps provide resilience in unpredictable or harsh environments. We have written about such diversity in many forms, such as outmigration timing of juvenile Chinook salmon in Central California, diversity of reproductive timing among populations of tidewater goby, and diversity in age at freshwater re-entry among steelhead in the Klamath River basin. This diversity can help buffer populations against drastic swings in abundance, and is called the “portfolio effect,” a term borrowed from the financial field. Just like a diverse financial portfolio can help to buffer the unpredictable swings of financial markets, having diverse populations of fish can provide resilience to large stock complexes, such as multiple populations of salmon among many connected rivers.

As we recently described on our blog, steelhead (Oncorhynchus mykiss) throughout the Pacific Northwest, show diversity in their run timings, or the timing of their return to freshwater. Steelhead exhibit both summer-run and winter-run types, and understanding how these different runs evolved is important for deciding the amount and level of protections afforded to various populations under the Endangered Species Act. FISHBIO fisheries biologist Matt Peterson participated in a study (Arciniega et al. 2015) recently published in the journal Conservation Genetics that examined the question of run timing origin among summer-run and winter-run steelhead in Northern California and Oregon by combining genetic data and life history information of steelhead populations.

There are two primary ways that run timing may have evolved: all the summer-run steelhead populations from across the landscape may have descended from a single, ancient summer-run steelhead population (conceptual diagram #1). Alternatively, habitat and environmental conditions across the landscape could have allowed for a similar trait (such as run timing of summer-run steelhead) to evolve multiple times, independently of each other (diagram #2). The latter process is often called parallel evolution, which refers to repeated evolution of a similar ecological trait within the same species. Each scenario makes different predictions about which groups of steelhead would be most closely related to each other.

To investigate which mechanism was at work, the authors collected genetic information from four summer-run steelhead populations from the Eel, Klamath, Umpqua, and Columbia River basins, and 17 winter-run populations from throughout California and Oregon. The scientists extracted fish DNA from fin clips and used 102 genetic markers to test the genetic relatedness of summer-run and winter-run populations. These markers included 12 microsatellite segments (which are sections of a repeated sequence of DNA, such as CACACA) and 90 single-nucleotide polymorphism (SNPs) locations (which are variations that occur at a single point in the genetic code). The frequencies at which different alleles (or versions) occur at each genetic marker can be used to infer relationships between groups of fish.

Interestingly, these results from steelhead show both similarities and differences to a previous study examining similar questions about run timing in Chinook salmon in the Pacific Northwest (Waples et al. 2004), which found evidence for both potential mechanisms of run timing evolution. In coastal areas, the authors found support for parallel evolution (i.e., summer- and fall-run Chinook populations in the same river were more closely related to each other than to other rivers). However, there was also evidence for a distinct genetic lineage in spring-run Chinook populations from the upper Columbia River basin (upper Columbia, Snake, Deschutes, and John Day Rivers). In the upper Columbia basin, all spring-run Chinook populations were more related to each other than to other runs in the region.

The distinction between the two different processes is important for conserving and managing salmonid populations. As Waples et al. (2004) note, if a population was to be extirpated, it may recover more quickly (perhaps on the order of 100 years) under the proper conditions if that population had undergone parallel evolution: if the trait has evolved multiple times, it is reasonable to expect it to evolve again. However, in the case of the interior Columbia River populations that are derived from a single evolutionary event, it would likely be nearly impossible to recover that group of populations or lineage of Chinook salmon. The new study of steelhead highlights the importance of maintaining the habitat and environmental conditions that support the unique and more susceptible summer-run steelhead populations in the Klamath and Eel rivers.