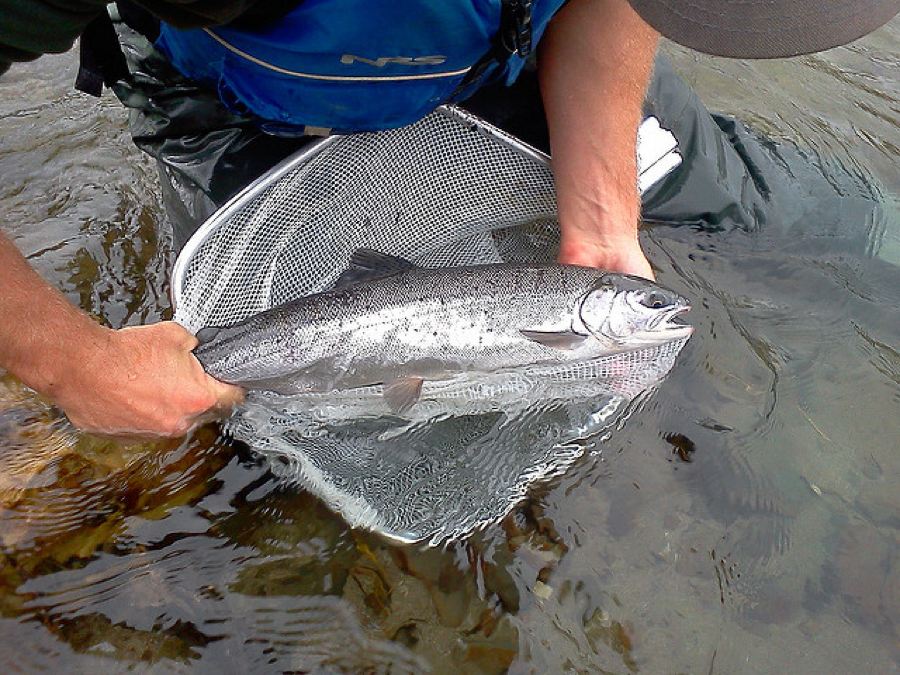 Watching salmon during spawning season makes one thing abundantly clear: the reproductive journey from the ocean back to freshwater and subsequent spawning take a heavy toll on the fish. Battered and beaten, most Pacific salmonids die after spawning only once. However, steelhead, or rainbow trout that swim to the ocean, can spawn repeatedly, undergoing multiple grueling journeys to the ocean and back. Steelhead that return to the ocean after spawning are termed kelts. Weak and exhausted, kelts drift downstream to estuaries or the ocean and resume feeding for one or two years, before undertaking yet another spawning migration – if they survive. With depleted energy reserves, kelts are more likely to die when they have to pass around dams, where downstream fish passage structures are typically designed to help juvenile salmonids, not adults. In dam-heavy river systems like the Columbia Basin, this results in fewer steelhead able to spawn repeatedly, adding strain to many already struggling steelhead populations. To promote steelhead population recovery, the Columbia River Inter-Tribal Fish Commission (CRITFC) and the Yakama Nation use a novel approach to improve the rate of successful repeat-spawning of steelhead by giving them special care, a practice known as “kelt reconditioning.”

The process of kelt reconditioning entails capturing kelts as they drift or migrate downstream, and holding them in large tanks where they receive a regimen of anti-fungal treatment, parasite medication, and a diet of specially formulated pellets and krill to help them recover from their arduous journey. The holding facilities are closed to the public to promote “R&R” in quiet surroundings for several months. Before releasing reconditioned steelhead back into the river, which is timed to coincide with the natural upstream migration of steelhead arriving from the ocean, fish either undergo an ultrasound examination to determine the maturity level of their reproductive organs, or are pre-screened for reproductive readiness by measuring their blood hormone levels (Pierce at al. 2017). While a small sub-set of the fish are spawned in facilities to evaluate the viability of their eggs, this process still allows the released fish to naturally select their mates and spawning sites, which eliminates the domestication effects often associated with hatchery operations.

Female salmonids invest much more energy into reproduction (in the form of large and energy rich gonads) than males, but perhaps surprisingly, female steelhead are more likely than males to survive multiple rounds of spawning. These females spend little or no time guarding their redds, and migrate back downstream shortly after spawning. Males, on the other hand, compete actively with one another and can mate with multiple females, meaning they spend a longer time in freshwater, and ultimately have lower survival. As a consequence, almost all (more than 90 percent) of reconditioned kelts are female. Helping increase the number of fish that survive to spawn repeatedly can bring many benefits, including increasing the lifetime reproductive fitness, or number of eggs produced, of individual fish; increasing genetic diversity by allowing repeat spawners to mate with fish that return at different ages; and increasing the overall population size.

A rigorous scientific data collection, monitoring, and evaluation network accompanies the reconditioning program, continuously tracking survival, growth, and health of fish at the facility. The researchers also individually mark fish with PIT or hydroacoustic tags to assess the fate of successfully reconditioned fish, and to confirm if they successfully build redds and spawn after release. Since the program’s inception in 1999, similar programs have been implemented elsewhere in in Washington, Oregon, and Idaho. Last winter, reconditioned kelts comprised about 15 percent of the spawning population in the Yakima River in Washington. Projected steelhead releases this year are expected to boost the spawning population in the Snake River by 20 percent, suggesting that “steelhead spas” can be an effective tool for population recovery.