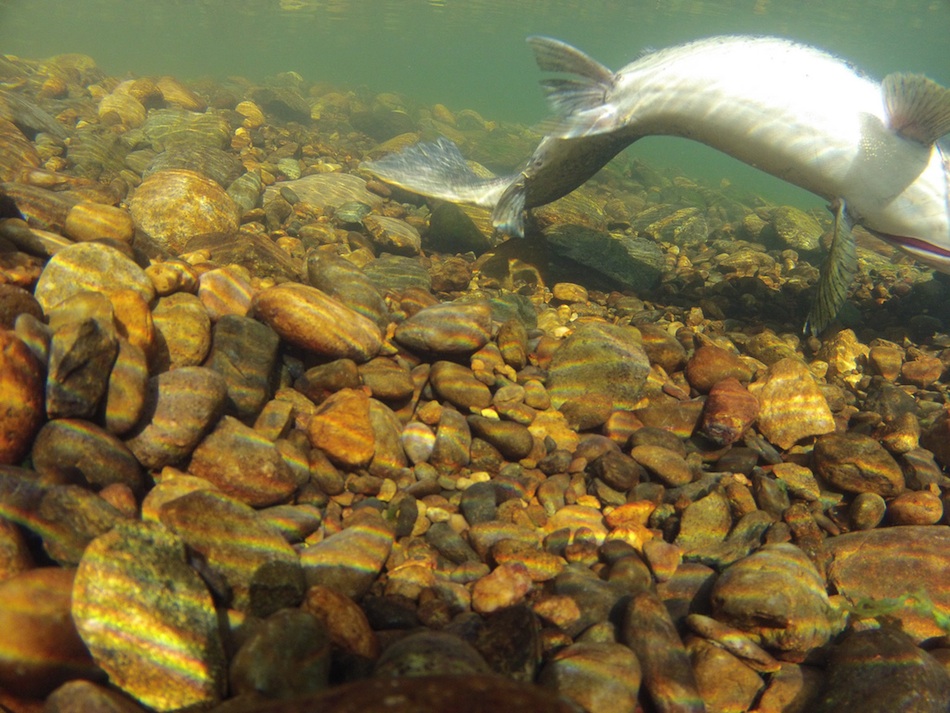 For a species to persist, individuals must survive, reproduce, and leave behind viable offspring. In the case of salmon, evolutionary fitness requires successful spawning. Salmon are prolific egg producers, but their reproductive success largely depends on how many of those eggs survive to become fry. A major reason why many salmon eggs may not survive is that adult salmon often dig their redds (nests) on top of redds already created by other fish. This “redd superimposition” is believed to be a major source of salmon embryo mortality because eggs are easily scattered or crushed by the digging behavior of females. Other threats to salmon eggs include predation, low dissolved oxygen levels, redds clogging up with fine sediments, and extremes of temperature and water flow (Quinn 2005). One reason for the success of salmon hatcheries is that they short-circuit this egg-to-fry survival bottleneck through the use of artificially controlled reproductive and early rearing conditions.

Salmon spawning success in the wild depends on factors such as egg number, egg size, and an adult’s ability to obtain a high-quality redd site and defend it from being dug up by other female fish (van den Berghe and Gross 1989). The damage to eggs inflicted by redd superimposition depends on the timing of redd construction as well as female size. Adults that arrive to the spawning ground earlier have top choice for nest sites, but must contend with fish arriving later that might superimpose their redds on top of ones already constructed. Larger females dig deeper and wider nests, so the damage is greater if a large fish builds a nest on top of one built by a smaller fish. If females possess sufficient energy to defend their nests for about two weeks after spawning, then their eggs have a much greater chance of surviving to the fry stage. During the first two weeks after fertilization, the embryo remains in a very fragile state as its cell layers continue to form. After 10-14 days, the embryo becomes hardier and able to withstand more mechanical shock. This is also the time when black pigment becomes visible in the embryo’s developing retina. These “eyed eggs” are recognized by hatchery staff as being the life history stage that is much safer to handle and transport.

Surprisingly, the effects of redd superimposition on individuals and populations have received little scientific attention. Challenges include linking parents to embryos and the time needed to count salmonid eggs which number in the thousands for just one individual. Hendry et al. (2003) performed one of the few studies that quantified the effects of redd superimposition on individual salmonids. The researchers marked eggs by injecting non-toxic dye into the body cavities of mature female sockeye salmon from southwest Alaska. The team closely monitored redd construction activities and noted if superimposition occurred. They then excavated two nests constructed by females with dyed eggs; one was superimposed by a female with undyed eggs and the other was not superimposed. After counting the eggs and correcting for female body size, the scientists found three times fewer eggs from the female whose nest was superimposed. The authors concluded that redd superimposition imposes a substantial fitness cost on members of a population.

Despite the negative effects on certain individuals, redd superimposition may actually confer some advantages to populations as a whole. Smoker et al. (1998). documented a remarkably strong genetic influence on the run timing of adult pink salmon in southeast Alaska. The authors hypothesized that the process of redd superimposition helped stagger the salmon run to peak at multiple times during a season by disproportionately favoring early and late returning fish. The genes of early arriving fish were preserved because adults guarded their nests to avoid superimposition, allowing relatively large proportions of their eggs to survive to the eyed egg stage. The genes of late arriving fish were preserved because their nests were less likely to be disturbed by additional spawning. However, fish returning mid-run were disproportionately selected against because they spent more energy waiting to spawn than nest guarding, making their progeny more susceptible to redd superimposition by late arriving females.

Multiple peaks in run timing within a reproductive season may confer resiliency to salmon populations (Hilborn et al. 2003). The progeny of early arriving fish emerge from nests sooner and are able to establish territories and achieve larger sizes than those of late arriving fish. However, larger salmonids are also more vulnerable to environmental extremes, such as very high temperatures or very low food availabilities. They are also more at risk of being swept downstream by late rainy season storms. Later emerging fish help the population hedge its bets against these environmental uncertainties. Clearly, much of the research is still in the theoretical stage. However, the dramatic decline of wild salmon populations in California (Katz et al. 2013), the high levels of hatchery strays to wild spawning grounds (Johnson et al. 2012, Kormos et al. 2012, Palmer-Zwahlen and Kormos 2013, Palmer-Zwahlen and Kormos 2015), intense drought, and climate change, all make a strong case for further study on how redd superimposition impacts the viability of California salmon populations.