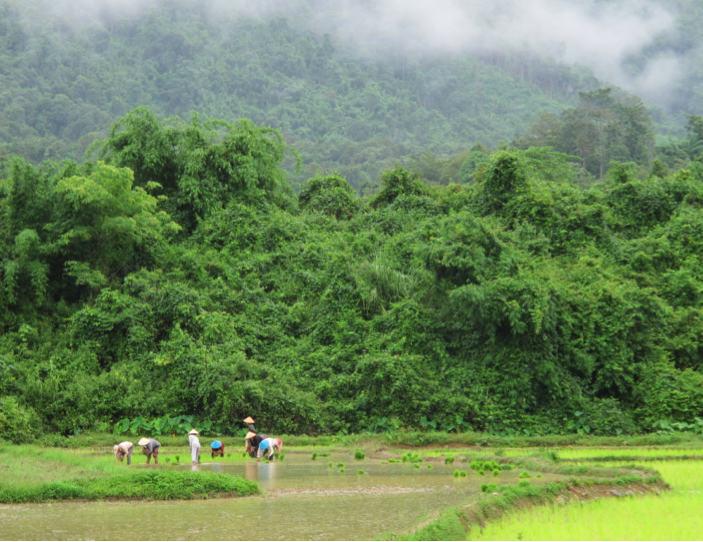 Since FISHBIO began working in the Mekong River basin in 2009, we have noticed subtle (and not so subtle) cultural differences between the United States and Southeast Asia. Often times the cultural differences lead to amusing stories, while other times they can create unfortunate misunderstandings. Generally, there is a stereotype that people from western cultures are more independent and analytical thinkers, while Asian cultures tend to be more cooperative and holistic in their thinking. A recent article published in the journal Science has proposed, surprisingly, that which group you fall into may come down to whether your ancestors farmed wheat or rice.

Over the years, several hypotheses have been proposed to explain why some cultures tend to be more individualistic, while others are more interdependent. Under the ‘modernization hypothesis,’ as a culture becomes increasingly wealthy, the people become more individualistic (Greenfield 2009). From an ecological perspective, the ‘pathogen prevalence theory’ argues that cultures with a higher historical prevalence of communicable diseases will be more loyal to their group and are less likely to be open to strangers (Fincher et al. 2008). Now, Thomas Talhelm from the University of Virginia, and his colleagues have developed a new theory, which they call the ‘rice theory.’ They hypothesized that communities historically practicing paddy rice farming, which requires complicated irrigation systems and intensive, coordinated labor, are more likely to develop cooperative relationships and think holistically. In contrast, wheat farming does not require irrigation, and a single family can perform planting and harvesting on its own. Thus, the wheat-growing cultures are more likely to produce individualistic and analytical-thinkers.

To investigate evidence for the ‘rice theory’ within a single culture, researchers tested 1,162 Han Chinese college students from six sites within China. The team chose to study China because the Chinese have traditionally grown both rice (in Southern China) and wheat (in Northern China). They asked the students to perform three tasks, which provided measures of cultural thought, implicit individualism, and loyalty/nepotism. The results of these tests indicated the most support for the rice theory, as people from rice-farming cultures tended to be holistic-thinkers who act more loyal to their community. For example, in one test participants were given a list of three items (e.g., train, bus, and tracks) and asked to pair two items together. People from rice-growing regions were more likely to make pairs of functional, holistic relationships (e.g., ‘trains run on tracks’), while people from wheat-growing regions were more likely to pair abstract categories, showing analytical thinking (e.g., trains and busses are both forms of transportation).

The researchers even tested this theory at a finer geographic scale to try to separate out the effects of climate, dialect, and other correlated differences. Their results show that people from neighboring counties within China that differed in the percent of farmland devoted to rice paddies also showed differences in their cultural thinking – the larger the area of rice paddies, the more likely people thought holistically. The modernization hypothesis did not hold, as wealthier regions actually responded more holistically, and neither did the pathogen theory, as provinces with higher disease rates actually thought less holistically. The researchers plan to test their theory in other rice growing areas such as West Africa and India. In the mean time, this study gives us some food for thought.