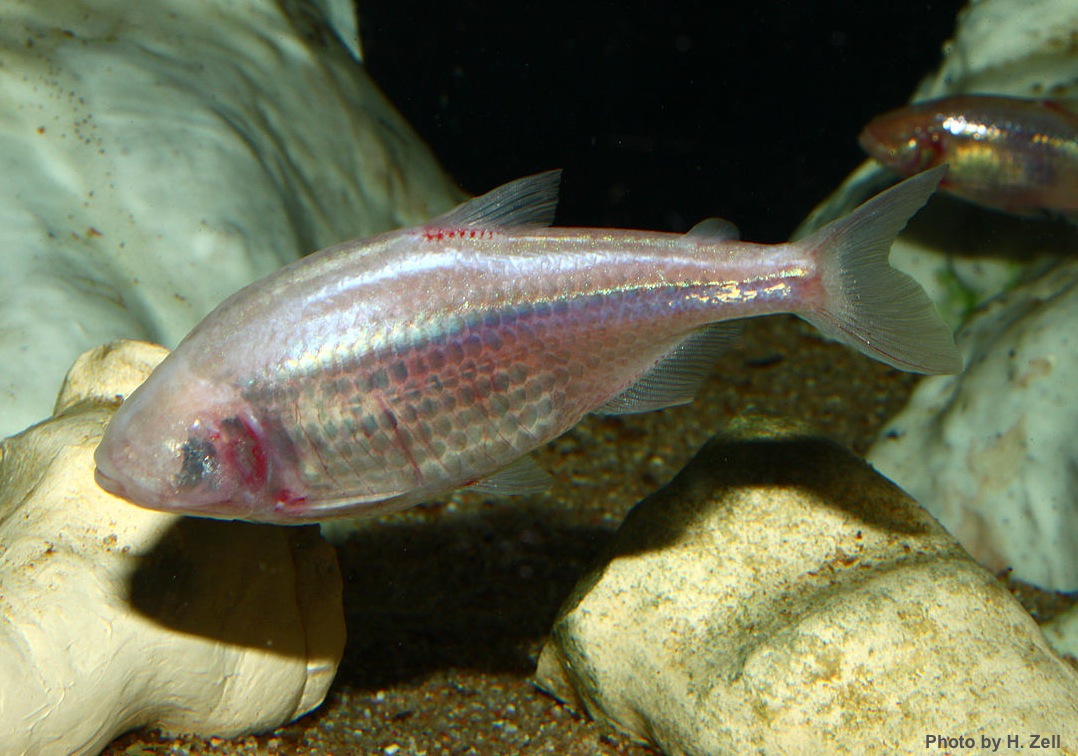 Food can be hard to come by for fish in harsh environments, such as the dark isolation of freshwater caves. Because caves are typically devoid of light, plants of any kind are limited or absent. Furthermore, the aquatic organisms that would eat these plants or algae, including insects and crustaceans, can also be very scarce. If fishes inside caves can’t scrounge up dinner at home, they must rely on a delivery coming from elsewhere. Most of the food that finds its way to these fishes is “allochthonous,” or derived from outside the waterway. Nutrients often come from nearby terrestrial sources, such as bat guano, decomposing animals, or terrestrial insects. This allochthonous food supply is rarely consistent, and may only be available during pulses in seasonal flow or from other transitory events (Aspiras et al. 2015, Yang et al. 2008).

Fishes living in these food-limited environments have developed interesting coping mechanisms to deal with the challenges of food scarcity. One such example is the binge-eating blind Mexican cavefish, Astyanax mexicanus, the focus of a recent study in the journal Proceedings of the National Academy of Sciences (Aspiras et al. 2015). More than 170 species of cave-dwelling freshwater fish species, known as troglobites, are found throughout the world (Soares and Niemiller 2013). The Mexican cavefish occurs in two forms: one that lives in surface rivers, and a blind, albino form that lives in caves. Considering their limited food supply, it might seem surprising that the cave form of Astyanax mexicanus can be fatter than its surface-dwelling conspecifics. But scientists from Harvard University and New York University discovered that cavefish from Tinaja, Mexico, have a greater appetite than their surface counterparts and pack on the fat by binge eating (Aspiras et al. 2015).

Despite their increased liver size and liver lipids, these fat fishes do not appear to suffer from health problems normally associated with obesity. However, the scientists discovered that the cave-dwelling fish had mutations in a protein called the melanocortin 4 receptor (MC4R), which is also associated with obesity in humans (Aspiras et al. 2015). A normally functioning MC4R protein is responsible for sending signals to the body that it is full, and to cease feeding (Walley et al. 2009). However, mutations in this receptor appear to cause binge eating, which helps the cavefish bulk up when food is present and withstand fasting periods when food is scarce (Aspiras et al. 2015).

Surprisingly, these are not the only fish that harbor a binge-eating propensity. Armstrong and Bond (2013) found this trait in Dolly Varden (Salvelinus malma) in the Alec River of Alaska. The Dolly Varden gorge themselves primarily on sockeye salmon eggs for a five-week period, during which time they obtain most of their energy for the whole year. These fish then put their digestive system on hold by absorbing or shrinking their guts and liver to compensate for the lack of food during other times of the year (Armstrong and Bond 2013). Hopefully, none of these overeating fishes will make their way into California rivers. With the population of non-native striped bass already capable of consuming every juvenile salmon migrating out of the Sacramento and San Joaquin Rivers, (Loboschefsky et al. 2012), the last thing native fishes need is a binge eater in town.