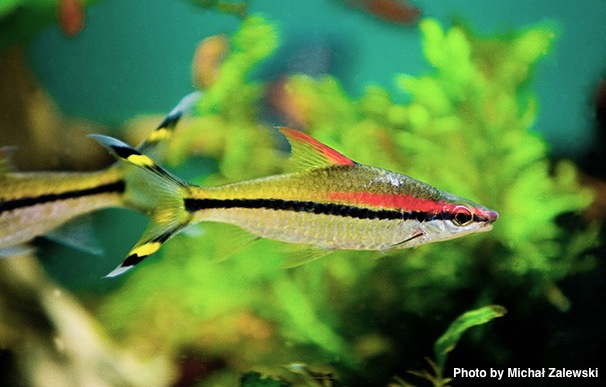 Flashy colors and feathery fins make tropical freshwater fishes the darlings of aquarium collectors and hobbyists worldwide. However, the multibillion-dollar aquarium trade, which involves some 5,300 freshwater and 1,802 marine fish species (Raghavan et al. 2013), can take a heavy toll on native fish populations (see Don’t dump that fish; The Mekong’s Amazon exotics). Only about 10% of freshwater aquarium fishes are bred in captivity – the rest are taken from the wild, which can threaten the viability of these populations. Of particular concern is the trade in threatened and endangered fish species, which, if unregulated, could push populations over the edge to extinction. A recent paper in the journal Biological Conservation (Raghavan et al. 2013) probes into the nebulous world of India’s aquarium trade, and highlights the need for industry regulation in this hotspot of freshwater fish biodiversity.

At the heart of the research is a case study of the Red Lined Torpedo Barbs, a pair of flashy fishes in the minnow family (Puntius denisonii and P. chalakkudiensis, photo above). These popular aquarium additions sell for $5 to $20 apiece, which has spurred a “boom and bust” fishery that has devastated local populations in the Western Ghats range of southwest India. Unmanaged collection during the last two decades has helped drive severe declines, resulting in these species becoming listed as ‘Endangered’ on the IUCN Red List. The species’ extremely low fecundity and a skewed sex ratio of nearly three males to one female in some locations (Solomon et al. 2011) has led scientists to argue that these fishes are not suitable for the aquarium trade. However, this has done little to stem the flood of endangered fishes shipped out of the country.

Because India’s official records of freshwater fish exports are often vague or incomplete, the researchers spent six years combing Internet records, interviewing collectors and exporters, and visiting aquarium shop owners across Europe and Southeast Asia. They identified 136 traded species from India and discovered that of the fishes exported during their study period, more than 1.5 million individuals (30% of the export volume) belonged to 30 threatened species. More than 300,000 Red Lined Torpedo Barbs were exported during the study period, and about 30% were collected and exported during their breeding season in October-March. Nearly half of the exported fishes had not yet reached maturity, and the actual number of fish removed from the wild is likely much higher than the number exported, because many of the fragile fish die after capture.

One of the first needed steps to clean up the trade is to require the official collection of basic data, the study authors argue, including species names, capture locations, and the names of collectors and exporters. The authors found no customs records at all for the exports of 24 species, including four threatened fishes, which ended up in international pet stores and were confirmed to have come from India. Fishes are clearly slipping through the cracks in this unregulated industry, but better record keeping alone will not protect fishes from decline, the scientists said. These data need to be combined with stock assessments to evaluate the health of wild populations, and enforcing regulations will require the cooperation of fisher communities. If managed sustainably, the aquarium trade can provide a needed source of income and help foster environmental stewardship among local communities. But as long as fishes are considered a free-for-all commodity for harvest, specimens in tanks may one day outnumber those in the wild.