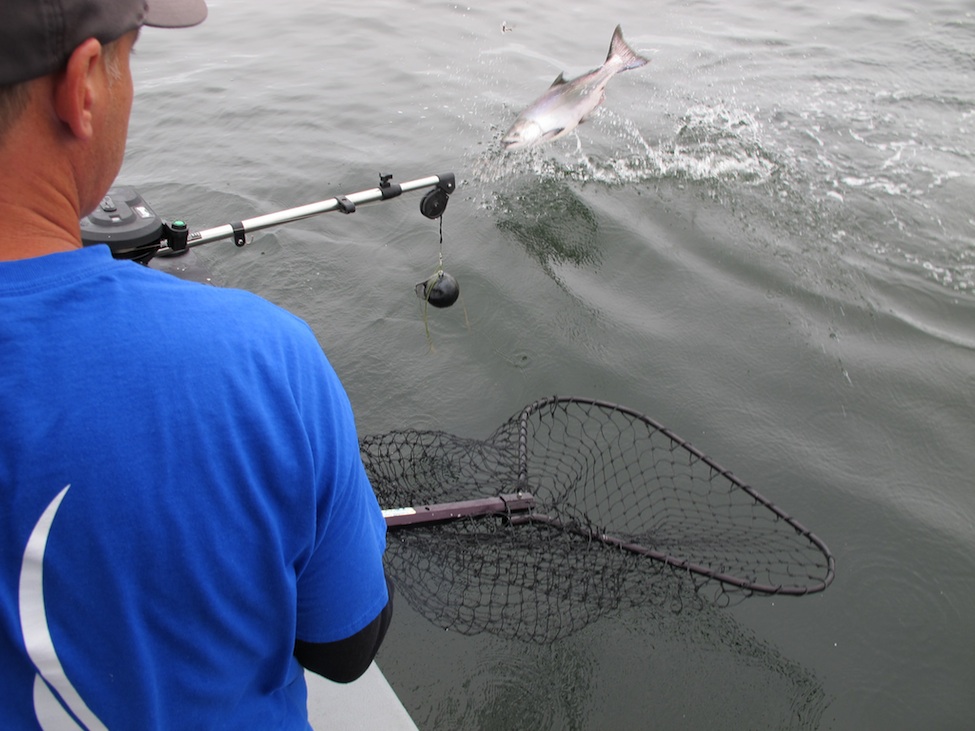 Determining what a salmon is worth is surprisingly ambiguous. Previously, we wrote a series of articles on the economic impact of California’s salmon fishery, which generated considerable interest and, as we hoped, inspired ample debate. Many readers noted that our economic impact estimates for commercial salmon in California were considerably lower than other available estimates. For example, a report often cited in the media, produced by Southwick Associates in response to the California salmon fishery closure in 2009, estimated the fishery to have an economic impact of nearly $1.4 billion per year and provide 23,000 jobs. Dividing the commercial estimate of impact by the number of fish caught in the commercial fishery that year reveals each individual salmon to be worth a staggering $16,779. However, other less publicized reports using slightly different methods have produced substantially lower estimates. One report by the University of the Pacific Eberhardt School of Business commented specifically on the Southwick report, and explained what the authors perceived to be errors in generating the estimate. The $1.4 billion estimate includes value and jobs resulting from retail sales, wholesaling, and distributing – a huge industry in California. The UOP Eberhardt researchers argue that if the salmon fishery were to close, as it did in 2008 and 2009, many consumers would simply switch to other seafood sources, so the seafood sales and distribution industry would not be so affected by the loss of California salmon.

One of the biggest surprises in conducting our research was the overall lack of information on the economics of California salmon. A general dearth of suitable analyses specific to West Coast fisheries, the wide array of reporting metrics, and numerous extrapolation factors pose challenges to conducting economic reviews. However, we continually seek out information on the subject to update our estimates. Here we present our most recent estimates of the economic impacts of California salmon, representing 2014 harvest data from the Pacific Fishery Management Council (PFMC), the National Marine Fisheries Service (NMFS) and the California Department of Fish and Wildlife (CDFW), along with metrics developed by a state economist with the U.S. Department of Agriculture’s Natural (USDA) Resource Conservation Service. 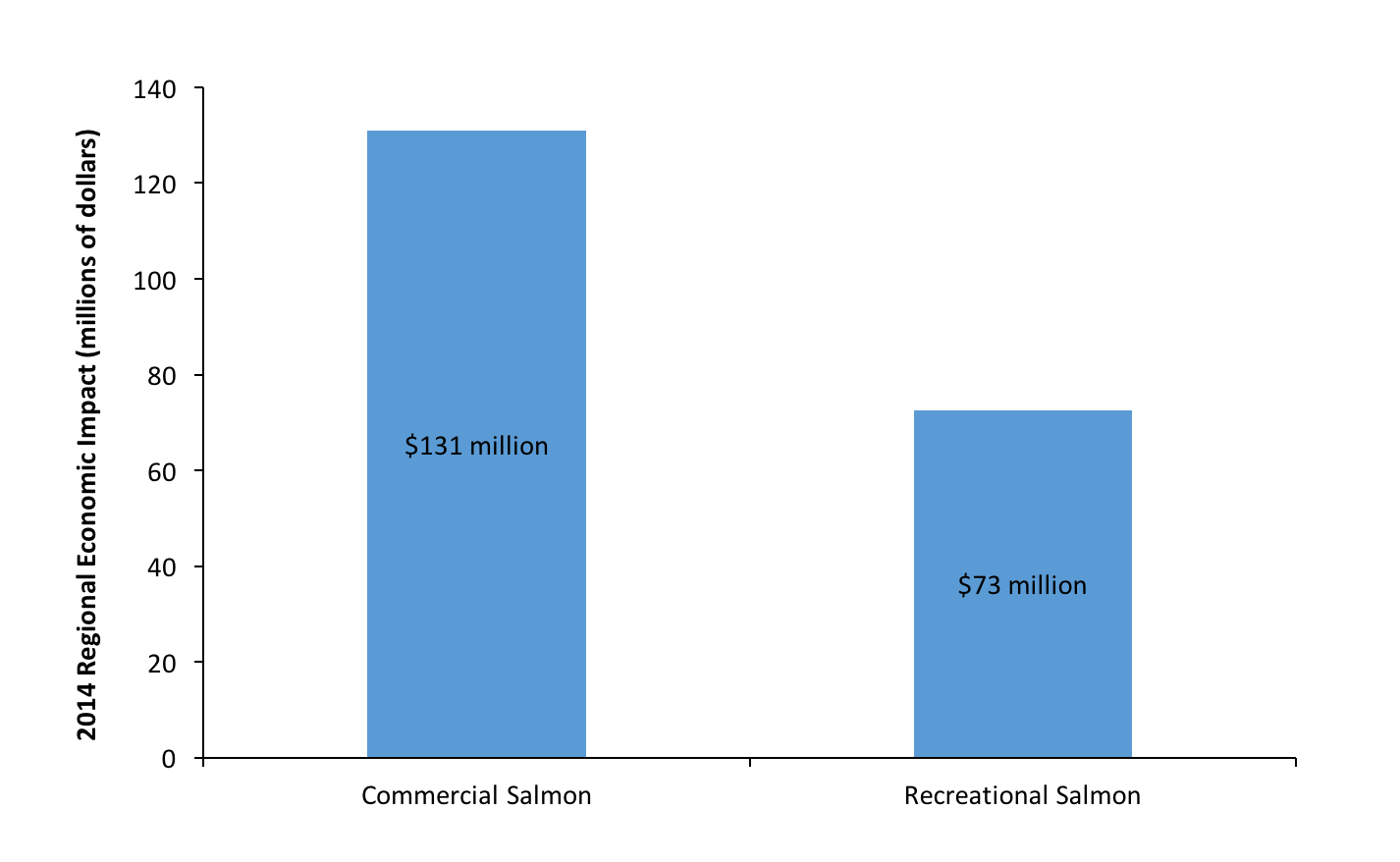 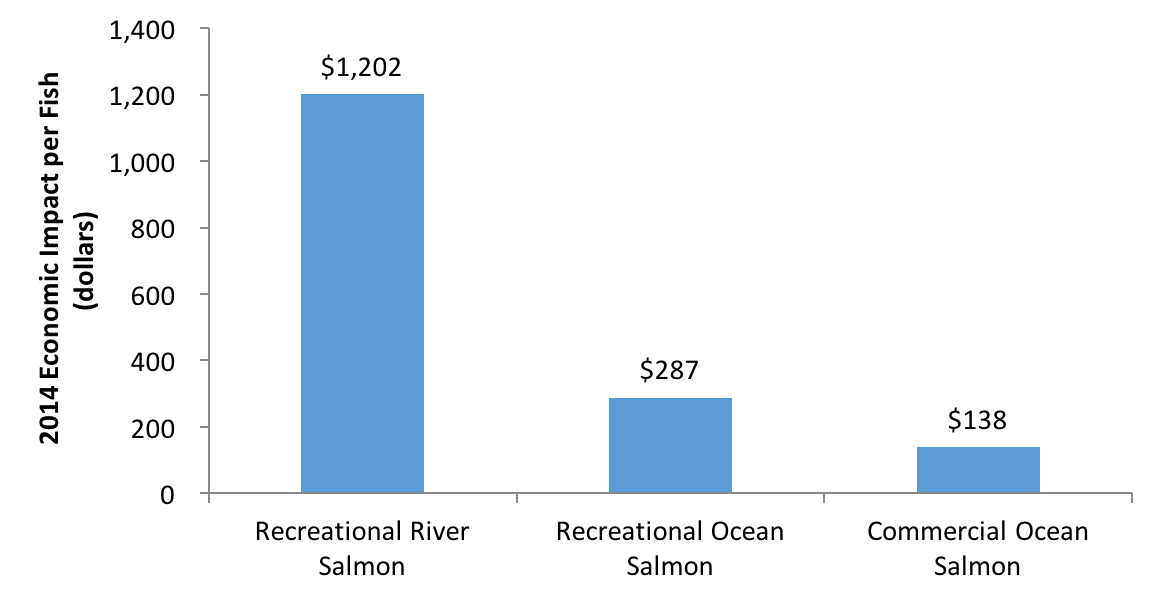 While this estimate of the value of a commercial fish is more than our previous estimate because of the increase in ex-vessel price, it is still much lower than the value of a recreationally caught fish. This is primarily a function of fishing effort and the necessarily higher efficiency of commercial fishing: one day of commercial fishing yields many more fish than one day of recreational fishing. We previously suggested that California could use these economics to its advantage by relying more on other Pacific states for commercially harvested salmon, while allowing more salmon to escape to the in-river fishery and natural spawning. Our colleagues from England suggested the same might be true in the UK, where each recreationally caught salmon is thought to contribute 3,000 £ to the local economy – a much greater value than a commercially caught fish. Whatever way you look at it, salmon in California are an economically important and culturally iconic species, and understanding their economic impact can only help in a state where water and fish can be such contentious issues.

*Editor’s note: These values were updated after this Fish Report was originally released to reflect increases from inflation.