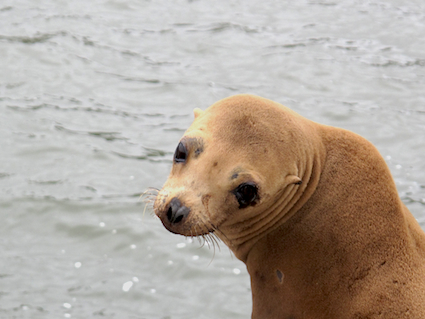 Competition is always toughest at the top, and this is especially true when the competition is over food. On the West Coast of the US there are two species of sea lions, the California sea lion (Zalophus californianus), which was the topic of a recent Field Notes post, and the Steller sea lion (Eumetopias jubatus), which made headlines early last week. Steller sea lion populations are separated into two stocks the Eastern stock is found from California through Southeast Alaska and the Western sock is found in the Gulf of Alaska and Aleutian Islands. Both California and Steller sea lions are protected by the Marine Mammal Protection Act (MMPA); however, California sea lion populations are robust and are not listed under the Endangered Species Act (ESA), while the Western stock of Steller sea lions is listed as endangered and the Eastern stock is listed as a threatened species.

The conflict between human salmon consumption and sea lion predation was discussed in detail in the recent post and has lead to the tagging, removal and sometimes euthanization of California sea lions on the Columbia River (Eastern Steller sea lions are present but are protected by the ESA). Interestingly, the two species not only compete with humans for food but also with each other, and the U.S. Army Corps of Engineers recorded 483 instances this spring of Steller sea lions stealing fish from California sea lions.

In stark contrast to the scenario on the Columbia River, the draft of the 2010 Groundfish Biological Opinion (BiOp) released by the Alaska Region of NOAA Fisheries on August 2, states that actions are needed in the Aleutian Islands to protect the food source for the endangered Western population of Steller sea lions. The adult sea lion population in this region has declined around 45% from 2000 to 2008, and the production of pups has declined by 43%. The Reasonable and Prudent Alternative (RPA) in the BiOp calls for the year-round closure of the Atka mackerel and Pacific cod fisheries in the Western Aleutians and a partial closure in the Central Aleutians, a move that some say could cost the fisheries tens of millions of dollars.