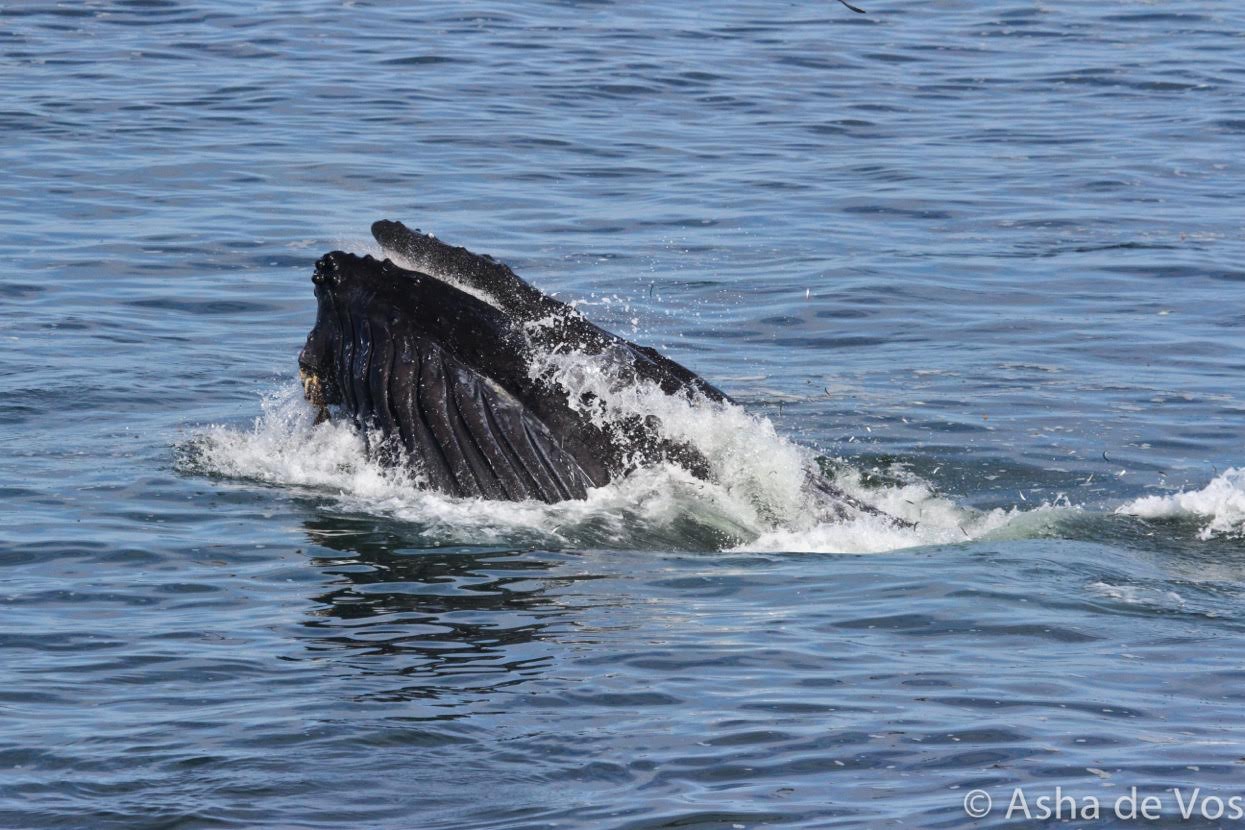 Our Santa Cruz office recently experienced quite a wildlife encounter when our community welcomed a very large visitor. Late summer and early fall are prime months for whale watching in Monterey Bay, as the water roils with animals feasting on giant schools of small fish. But whale watching took on a whole new dimension when, for nearly two weeks, a humpback whale regularly appeared just yards from shore, cruising in a small, shallow cove off the Santa Cruz coast. Often the whale could be seen swimming in circles, periodically breaking the surface with its giant head to feed – usually greeted by a chorus of cheers from spectators on shore. The whale lunged forward and gulped up huge mouthfuls of water, then squeezed the water out through its brush-like baleen plates, trapping the fish inside. This incredible close-up below shows anchovies flying in the wake of a giant bite. 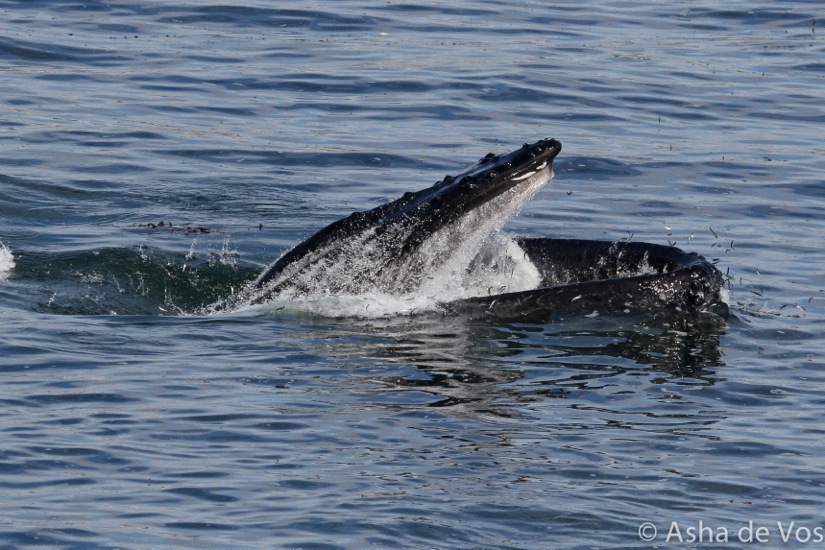 Dr. Asha de Vos, a marine biologist and educator who specializes in blue whales at UC Santa Cruz, observed and photographed the whale multiple times during its visit. Based on its markings, such as the white marks on its upper lip in the photo above, she determined it was the same animal returning for extra helpings. Even as someone who has spotted whales around the world, she noted: “It’s pretty special to be able to relax under a tree with a snack and watch this real live show.” de Vos said the cove is as shallow as 16 feet in some areas, and the whale’s feeding meant that food was clearly the motivating factor for its nearshore visit. The flurry of feeding activity in the cove also included flocks of seabirds, sea lions, harbor seals, and dolphins, all getting in on the anchovy action. When people talk about a “productive” ocean ecosystem, this is what they mean.

The whale served as a wonderful ocean ambassador for the community, bringing together hundreds of viewers, from joggers to policemen to hospital workers to the Fed Ex guy. “As a whale biologist and educator who is constantly trying to create fun ways to connect people with the oceans, it has been amazing to watch people flock to the cliffs and sit patiently for hours on end,” de Vos said. The reaction of the crowds to the whale’s activity demonstrates the value of bringing people close to nature. However, she expressed concern about the clusters of kayakers, paddleboarders and swimmers trying to get a little too close to the wild animal. “These animals are huge, and sometimes people tend to underestimate just how large and strong they are,” she said. 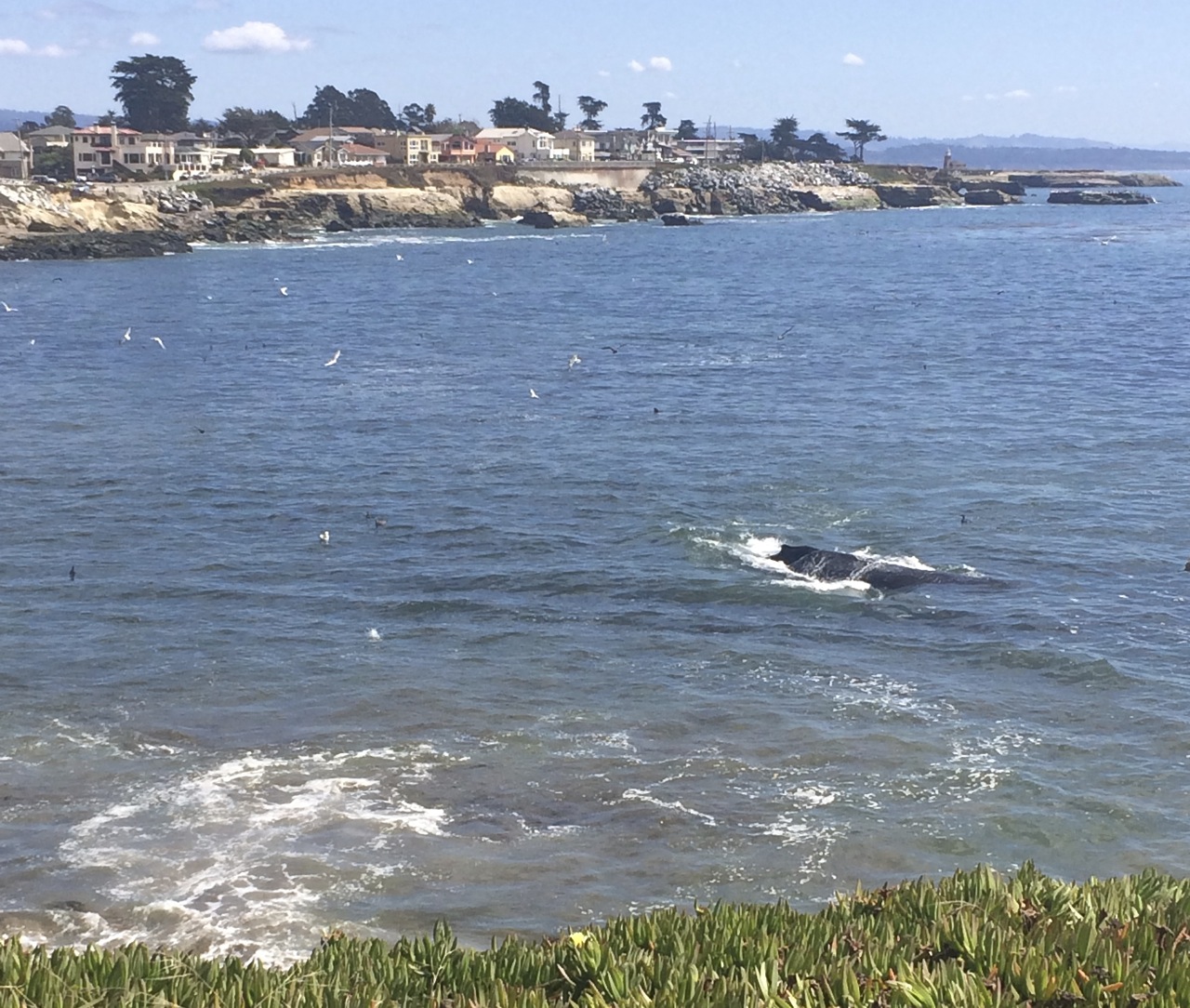 Humpbacks can grow to be 50 or 60 feet long (the size of a city bus) and weigh 40 tons. Seeing the whale’s broad sides break the surface of the water so close to shore really is like watching a big bus go by. A recent video shows a pair of kayakers elsewhere in Monterey Bay who were nearly crushed by a breaching whale. “The key thing is that the ocean is not our home as it is the whales’. We need to learn to respect that and keep our distance,” de Vos said. “After all, if we are trying to get the complete experience of observing animals in the wild, why would we feel fulfilled if our actions disrupted the whale’s behavior?” She explained that in this case, the main concern was the possible disruption of feeding activities as people kept getting in the way of the whale’s feeding path. “We don’t know exactly where the anchovy schools are moving around underwater,” she said. “So it is best to leave a wide berth so the whale can get to its food, no matter where the fish might roam.” Especially when watching an animal from shore is already prime viewing, there’s every reason to just let it be.