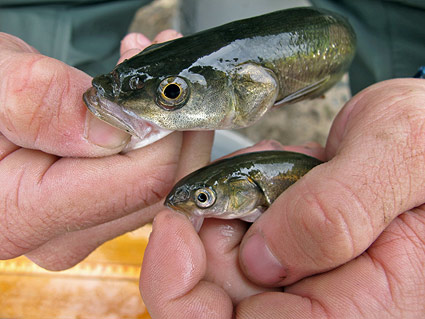 Found in many of the same watersheds and very similar in appearance, Sacramento Pikeminnow (Ptychocheilus grandis – top of photo) and Hardhead (Pogonichthys macrolepidotus – bottom of photo) are easily differentiated when in hand. The upper lip of the hardhead is tightly attached by a fold of skin (frenum) to the head. In contrast, the Sacramento pikeminnow has an upper lip that separates from the fish’s snout, called a protrusible jaw. As a result of this adaptation chewing no longer takes place at the edge of the mouth, consequently pikeminnows have modified sharp pharyngeal teeth inside the mouth (Moyle and Cech 2004, McGinnis 2006).