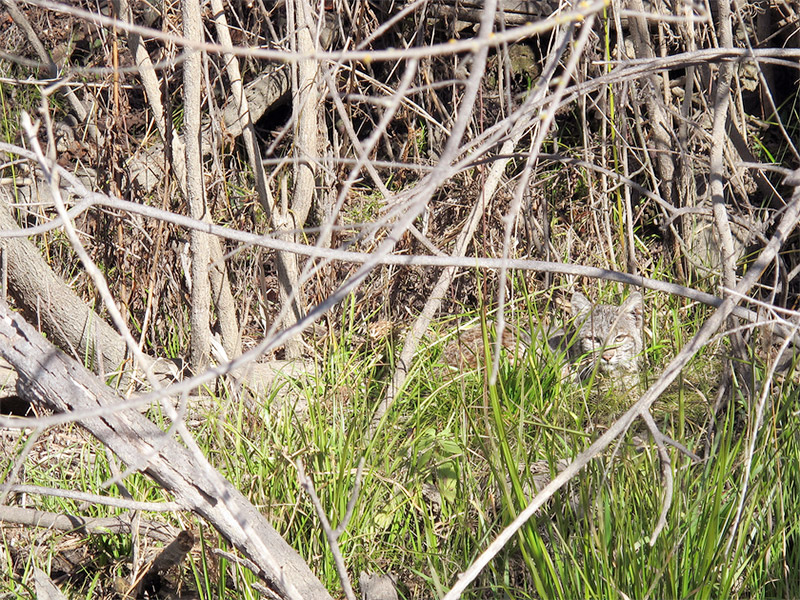 Wildlife watching can be like playing a game of “I spy.” If you spend enough time outdoors in California and keep a sharp lookout, you might be lucky enough to catch a glimpse of a tawny-eyed bobcat. This shy wild cat we spotted is a master at going unnoticed – and appears to have had its eye on us long before we noticed it. Bobcats (Lynx rufus) get their common name from their stubby tails. They have the largest range of any wild cat in North America, and can be found across almost the entire Untied States, unlike their close cousins the Canadian lynx (Lynx canadenses), which mostly thrive in snowy areas.  Bobcats are strictly carnivores, preying mostly on small mammals like rabbits, gophers, and grounds squirrels—with an occasional deer if they’re lucky (Labisky and Boulay 1993). Hunting and trapping bobcats is legal in many states, including California. The total take of bobcats in California increased sharply by 51% between the 2010-11 and 2011-12 seasons, to 1,813 cats. This is the highest number of cats killed since 1995, mostly as the result of commercial trapping, according to the California Department of Fish and Wildlife, which has spurred some state legislators to call for a ban on commercial bobcat trapping in California and limiting harvest to recreational hunters.

Bobcats are territorial, and stake out areas called home ranges that they mark with scat, scent, and scraped trees.  Males’ larger home ranges often overlap several smaller female home ranges, and bobcats in the northern U.S. tend to cover more ground than those in the south (Caso and Lopez Gonzalez 2008). Studying these home ranges is important because one of the biggest threats that bobcats face is habitat loss, which crowds the cats into smaller areas. While bobcats can be quite adaptable in living near urban areas, researchers have found that adult female bobcats in particular mostly stick to undeveloped land – presumably as safer haven to raise their kittens (Riley et al. 2003). Spotting an animal like a bobcat can be great reminder of the wildlife we share a our natural backyard with. We saw this bobcat basking in the sun on the banks of the Tuolumne River at (where else?) Bobcat Flat.