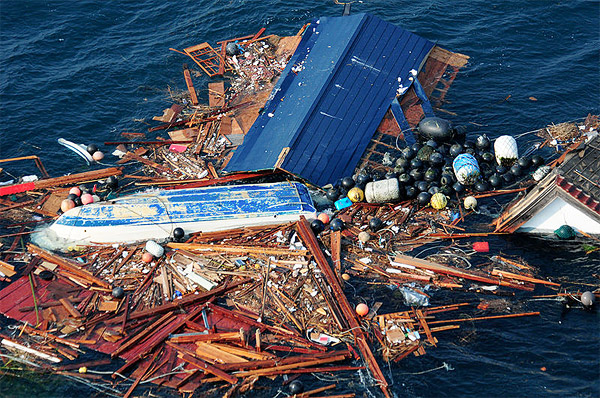 Early last month, a large, 66-foot-long dock washed up on the shores of Oregon’s central coast. The dock is part of the estimated 1.5 million tons of debris from Japan’s 2011 tsunami that is floating in the Pacific Ocean, which could potentially wash up on the shores of the West Coast and Hawaii over the next several years. Docks, boats and other debris from the tsunami drifting onto coastal beaches represent a trash cleanup challenge that may last for years to come. Biologists are equally worried about the threat of invasive species attached to the debris. The large dock recovered last month carried approximately 1.5 tons of marine organisms across the Pacific Ocean consisting of at least 50 different species. Researchers were shocked that the foreign organisms survived 15 months of travel across the deep ocean and fear that invasive species arriving on debris from Japan may colonize along the West Coast, which has been most vulnerable to invasive species brought unintentionally in the ballast water of ships from Asia.

Approximately half of the plant species found on the dock already exist on the West Coast. Species found on the dock with the most potential for successful invasion include the Northern Pacific seastar, the Japanese shore crab, and a species of brown algae called wakame that covered most of the dock. Although the marine organisms recovered were buried in an 8-foot hole above the high-tide mark, it is unknown whether the organisms may have already released spores or larvae that could have established a foothold in a bay or estuary as the dock floated along the coast. If established, their presence may harm native ecosystems, or the commercial, agricultural, or recreational activities dependent on these ecosystems. Costs to fight these invasions could quickly mount into billions of dollars. A couple of examples of current impacts on commercial activities caused by invasive species include Chinese mitten crabs consuming baby Dungeness crabs that are one of the region’s top commercial fisheries, and a seaweed called Spartina that chokes commercial oyster beds. A 2005 report from Cornell University estimated 400 threatened and endangered species in the U.S. are facing extinction because of invasive species (Pimentel et al. 2005). It is too early for scientists to know the degree to which the Japanese tsunami debris may contribute to the invasive species problems on the West Coast. It may only introduce one organism, but if it turns out to be a big problem there could be economic or ecological impact or even a human health impact.

In preparation for the tsunami debris, California, Oregon, Washington and Alaska have all established debris removal guidelines and many coastal cities have designated dump sites on their beaches. In California, officials say coastal currents may deflect most debris back towards Hawaii, but they still have guidelines in place for volunteers helping with debris removal in addition to federal National Oceanic and Atmospheric Administration guidelines. The majority of the debris is currently north of Hawaii, and scientists expect much of it to follow the currents to the Great Pacific Garbage Patch, an accumulation of millions of tons of small bits of plastic already floating in the northern Pacific Ocean. Given the amount of debris, we expect there will be plenty more stories in the future about strange and interesting things washing up on along the West Coast.