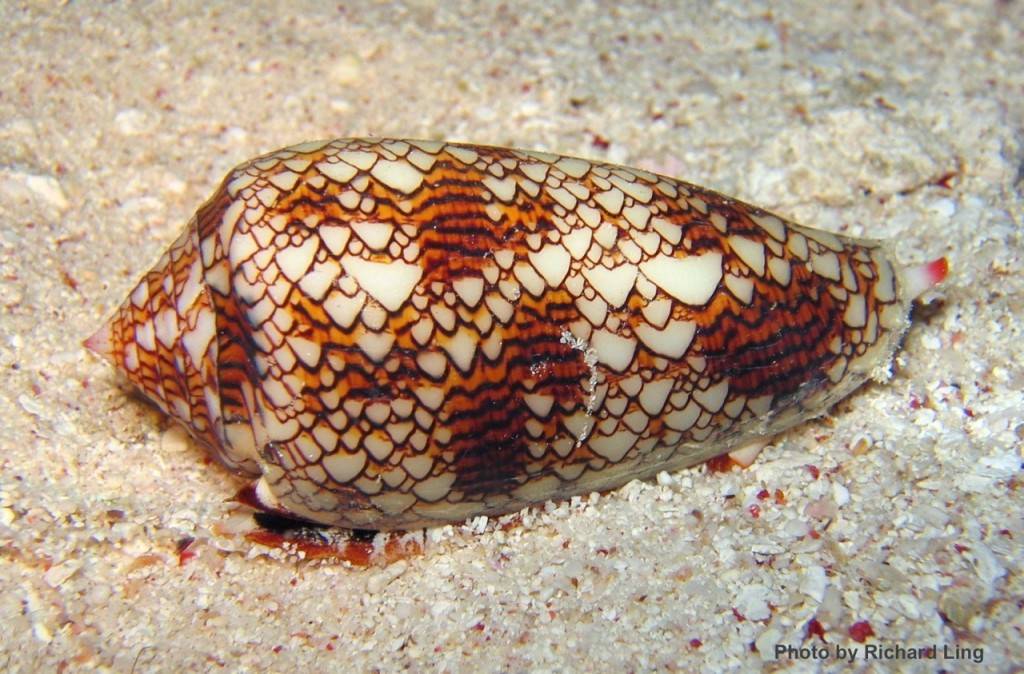 Cone snails, found in tropical waters around the world, are renowned for the fast-acting toxins in their venom, which they use to catch prey. Some species, such as Conus geographus from the Indo-Pacific, have venom so powerful it can kill an adult human in a matter of hours. A recent study by researchers at the University of Utah unveils a long-held secret of the cone snail’s toxic offense: some use a form of insulin, an important hormone that regulates sugar and fat metabolism in vertebrates, as a chemical weapon to debilitate their prey. These findings, published in the Proceedings of the National Academy of Sciences, could have important implications for the medical community because of the snail insulin’s unique molecular structure.

The researchers were studying the mechanism that C. geographus uses to trap its prey when they discovered genetic sequences that resembled insulin in the snails’ venom glands. Further chemical analysis confirmed the presence of insulin more similar to the type found in fish rather than in molluscs. The scientists compared the venom from C. geographus and C. tulipa, two species of cone snails that release venom into the water to stun their prey, to venom from other cone snail species that inject their prey with venom directly. When the scientists found that the venom of the injecting species did not contain insulin, they hypothesized that fish-like insulin has evolved in the venom of C. geographus and C. tulipa as a tool to increase its potency.

The scientists injected the insulin from the cone snails into zebrafish to test its effects, and saw the fish’s blood glucose levels plummet. And when fish came in contact with insulin in the water, it disrupted their swimming behavior. The researchers believe that the presence of insulin in the mix of toxins may allow the predatory cone snails to disable entire schools of fish with hypoglycemic shock, representing an entirely new technique for using venom.

Remarkably, this powerful form of insulin is the shortest ever sequenced, and it has fewer amino acids than any other insulin. The small size will give scientists the opportunity to conduct novel research that could provide new insights into the role of insulin’s structure. If the shorter length allows the insulin to act in a more streamlined manner than the more complex form found in humans, scientists could potentially find ways to improve the human body’s methods of controlling blood sugar and energy metabolism. And, in the words of senior author Baldomera M. Olivera, the results show that insulin can be “subverted for nefarious biological purposes,” thereby expanding our understanding of the chemical and functional diversity of venom and its components.