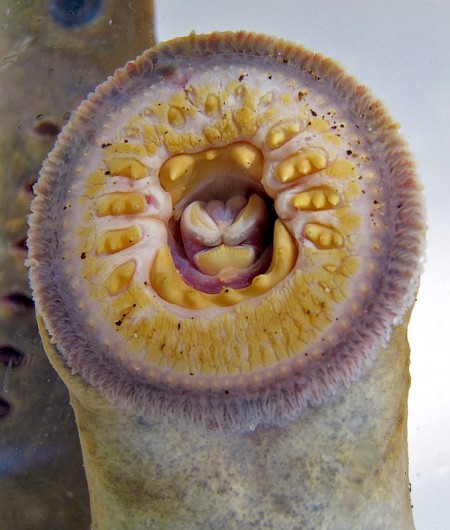 Before Bram Stoker wrote Dracula (1897) and at least 300 million years before Edward and the Twilight saga, lamprey evolved to terrorize fish with their blood-sucking, jawless mouths. This pacific lamprey belongs to the genus Lampetra, which is derived from the Latin word for suck. This is a great photo for illustrating the key physical characteristics for identifying adult lamprey. Pacific lamprey (L. tridentata) have four pairs of lateral tooth plates (bony projections along the sides of the mouth), whereas river lamprey (L. ayresi) and Western brook lamprey (L. richardsoni) have three pairs. The supraoral plate (bony structure on the top of the mouth) has three sharp cusps (hence the species name “tridentata”, or three toothed) and the transverse lingual lamina (tongue-like structure) is “V” shaped. This specialized mouth is evolved for latching onto the side of its host fish, typically salmon, then using its tooth plates and rasping tongue to penetrate the flesh and extract fluids for nourishment. While they are well adapted for blood-sucking this has not given them the popularity of other vampires. Sadly, unlike Dracula and Edward, lamprey are rarely described as handsome, charismatic or sophisticated.