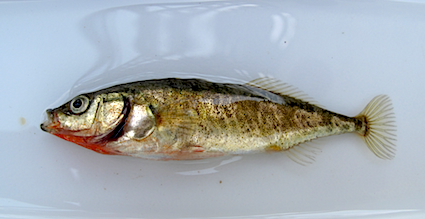 Not only are threespined sticklebacks (Gasterosteus aculeatus) able to tolerate a wide range of salinities, as featured in Mr. Adaptable, but they are also able to adapt to colder water temperatures. Evolution is ordinarily thought to take place on a macro-scale, over multiple generations, involving changes in genotype; however, adaptive evolution can be demonstrated on a micro-scale over a much shorter time period.

Researchers (Barrett et al. 2010) from the University of British Columbia, Vancouver, recently published these findings in an article titled “Rapid Evolution of Cold Tolerance in Stickleback.” They demonstrate that a threespined stickleback can adapt to tolerate much colder water temperatures in as few as three generations. They took sticklebacks from warmer marine populations and transplanted them to a cold freshwater environment. They found that within very few generations the fish had extended their coldwater tolerance by 4.5 degrees Fahrenheit. The researchers suspected that sticklebacks possessed the genes to tolerate colder temperatures, a possible remnant from the last ice age, but the ability to express those genes in such a short period of time was unexpected. Climatologist have predicted an increase in the intensity and frequency of high and low temperature extremes, and a general increase in average temperatures; therefore, there is more urgency in understanding the evolutionary response of biological communities to temperature extremes.