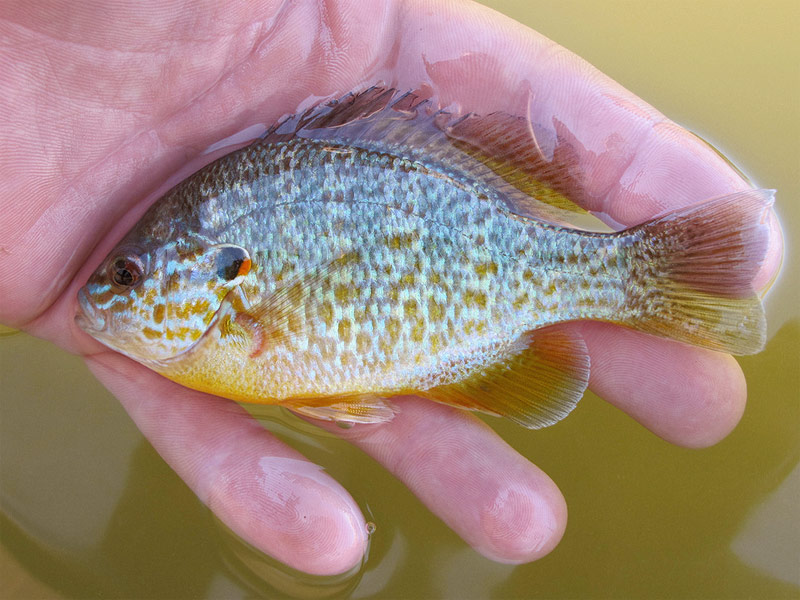 Although its not quite fall this pumpkinseed, with its orange coloration, is looking seasonable. Despite appearances, the pumpkinseed sunfish (Lepomis gibbosus) is named for its pumpkinseed shape rather than its pumpkin-esque coloration. The pumpkinseed is a freshwater fish in the sunfish family (Centrarchidae). It is native to the northeastern U.S., but has spread through introduction across North America. They are similar in appearance to bluegill and often occupy the same habitats, but pumpkinseed usually prefer colder water. The pumpkinseed has a dark black spot on its opercular flap, with a bright orange-red spot along the opercular margin. Some speculate that this opercular spot resembles a large eye, which may confuse and dissuade potential predators. Interestingly, like the smallmouth bass (see Watchdog or uh… Fish), the male pumpkinseed vigorously defends its nest. Pumpkinseeds feed on a variety of invertebrates and if snails are abundant they will develop strong jaw muscles to break open shells with their molar-like teeth before swallowing the soft parts and ejecting the hard parts.