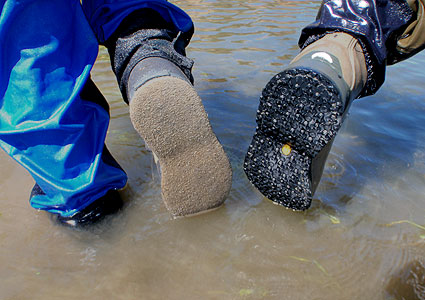 There is a movement afoot (pun intended) to ban the sponge-like felt-soled boots from use and recently Alaska and Vermont have approved such bans. Many fishermen and fisheries biologists prefer felt-soled boots because of their ability to grip slippery rocks. The best alternative to felt-soled boots are the studded, rubber-soled boots, which are easier to clean and disinfect after use and still provide adequate traction. Here are a few options for cleaning your gear, courtesy of Oregon State.