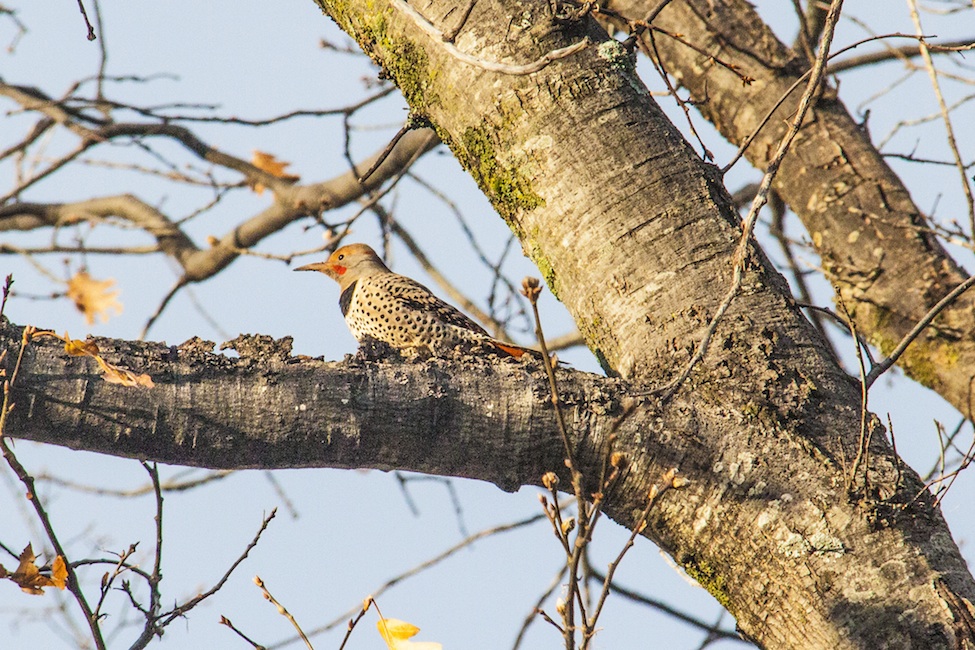 Learning how to identify common wildlife species can bring a greater appreciation for the diversity of wildlife surrounding us, and is one of our goals when we share knowledge of nature with others. Common animals may be frequently seen, but never really given a second thought until you learn about their unique qualities. The Northern Flicker (Colaptes auratus) is one species that often goes overlooked due to its elusive habits, but is actually a lovely bird that can be readily spotted if you know what to look for.

Although they are a member of the woodpecker family, the Northern Flicker doesn’t look like the “typical” woodpecker. It is mostly brown patterned with delicate black spots, has a gray head, black chest, white patch above the tail, and males have a red moustache-like marking, like the one shown in the photo above. There are two subspecies in the United States, the Yellow-Shafted and the Red-Shafted Flicker. We have the Red-Shafted Flicker here in the West, and this refers to the coloration on the undersides of their wings and tail. It’s easy to identify their feathers, which are bright orange in the center with black and white spots.

Unlike most woodpeckers, Northern Flickers forage on the ground for ants and beetles and take refuge perched on branches. They do share some traits with woodpeckers, such as hammering on tree trunks to communicate or to excavate nest sites. You can often see flickers when they are startled from under bushes as you pass by if driving or walking near a wooded area. Look for the white spot on their backs and characteristic swooping flight pattern as they take off.

Unfortunately, estimates for flicker abundance have lately shown a downward trend. Partners in Flight listed the Northern Flicker as a Common Bird in Steep Decline, meaning that while still common, its population has decreased by 50 percent in the past 40 years. This is troubling not just for the flickers, but for the many other birds and animals that use the nesting cavities flickers create. By providing this important habitat, Northern Flickers serve as a keystone species in the ecosystem, and they also keep forests healthy by reducing insect epidemics, such as the one currently contributing to the mass tree die-offs in the Sierra Nevada mountains. So if you happen to spot a Northern Flicker, keep in mind the important role this inconspicuous little bird plays in our forests.