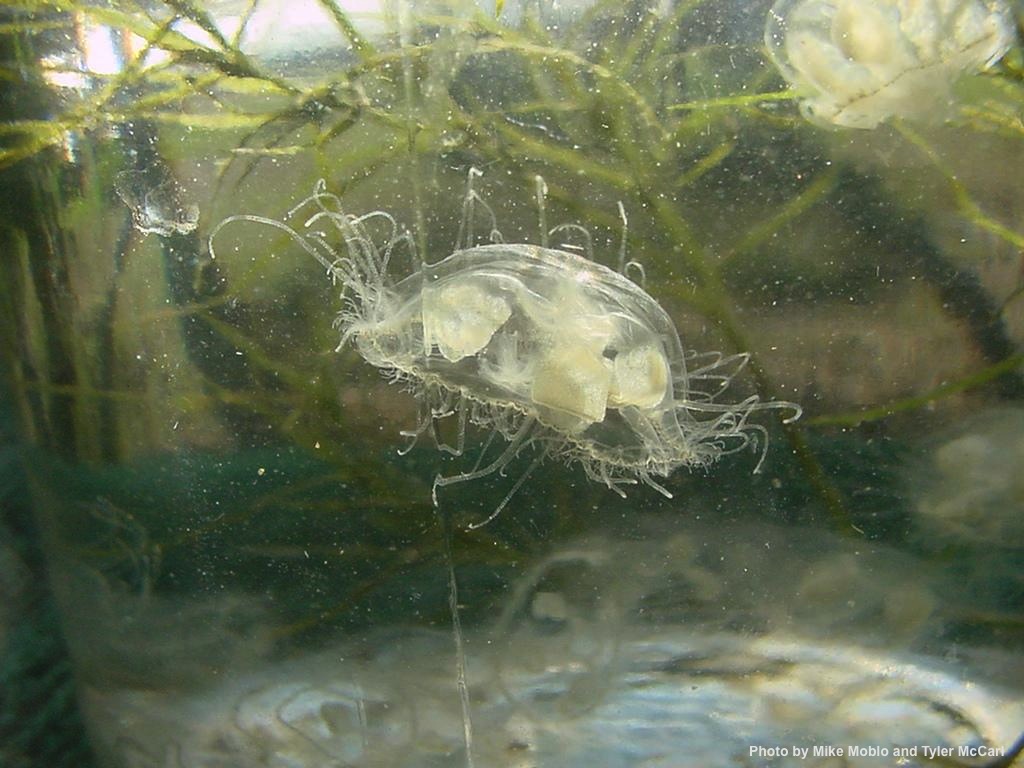 A rare opportunity for unusual wildlife viewing occurred in northern California’s Lake Oroville this summer, when many residents and visitors spotted a large bloom of freshwater jellyfish (Craspedacusta sowerbii). Employees at the Bidwell Marina reported observing countless translucent jellies at the surface of the lake in the evenings, and while locals noted this isn’t the first jellyfish sighting at Lake Oroville, many had never seen them in such large numbers. Like many of the organisms we encounter in our waterways, C. sowerbii is not native to the region. This non-indigenous aquatic species originates from the Yangtze River of China, and is thought to have been introduced from a shipment of aquatic plants in the early twentieth century. They have since been documented in numerous lakes and reservoirs across the United States, and are considered harmless to humans.

“Jellyfish” is actually somewhat of a misnomer for these curious invaders. Although all are members of the phylum Cnidaria, the freshwater jellyfish are part of a class called Hydrozoa (which also includes the Portuguese man o’war (Physalia physalis)), while marine jellyfish are in the class Scyphozoa. Although the freshwater jellies have a wide range, they can be relatively difficult to observe in the wild. This can be attributed to their small size (roughly 20 to 25 millimeters when fully developed) and transparency. In the first life stage, called the polyp form, the animals are quite nondescript, standing only one millimeter in height, and can be found attached to many surfaces on river and lake bottoms.

There are multiple ways that C. sowerbii can reproduce, including both asexual and sexual reproduction. The polyps can reproduce asexually in two ways; by growing a bud that will eventually develop into another full polyp, or by creating a bud that becomes a microscopic crawling larva called a frustule, which will crawl off to find suitable habitat and eventually develop into a new polyp. The species can also reproduce sexually: the polyp develops into a form called a medusa, named to reflect its resemblance to the snake-filled head of Medusa. The medusa is the free-swimming form of the jelly shown in this photo, which will release sperm or eggs to produce larvae through sexual reproduction. The recent bloom in Lake Oroville suggests the freshwater jellies are benefiting from their preferred warmer water temperatures, similar to other non-native species featured in our previous post (Winners and Losers In Warm, Dry Times). Who knows what other unusual wildlife encounters might occur as these extreme environmental conditions continue?