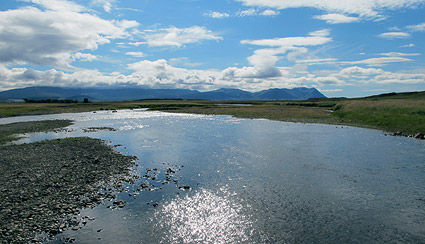 During a recent visit to Iceland we were amazed by the limited number of freshwater fish species present on the island (7 species). There are only five native freshwater species and all are diadromous (use both marine and freshwater habitats during their life cycle). Atlantic salmon (Salmo salar), Arctic char (Salvelinus alpinus), and brown trout (Salmo trutta) live in the ocean as adults and migrate upriver to breed in fresh water (anadromous). Three-spined stickleback (Gasterosteus aculeatus) and European eel (Anguilla anguilla) are also native and live primarily in freshwater rivers, but migrate out to brackish estuaries or the sea to spawn (catadromous). Two non-native fish can also be found in Iceland’s rivers and lakes. Rainbow trout (Oncorhynchus mykiss) are bred in hatcheries and planted for sportfishing but do not reproduce in the wild. Occasionally humpback (pink) salmon (Oncorhynchus gorbuscha) are found on the island, but they are presumed to be strays from Russia.

Fisheries biologists in the Western U.S. are faced with much more diversity, with 58 species of freshwater fish found in the California Delta (more than half non-native) and 60 species in the Columbia Basin (nearly 40 percent non-native). Iceland maintains a strict disinfection policy towards tackle and waders imported by visiting anglers to prevent the introduction of diseases and undesirable species.